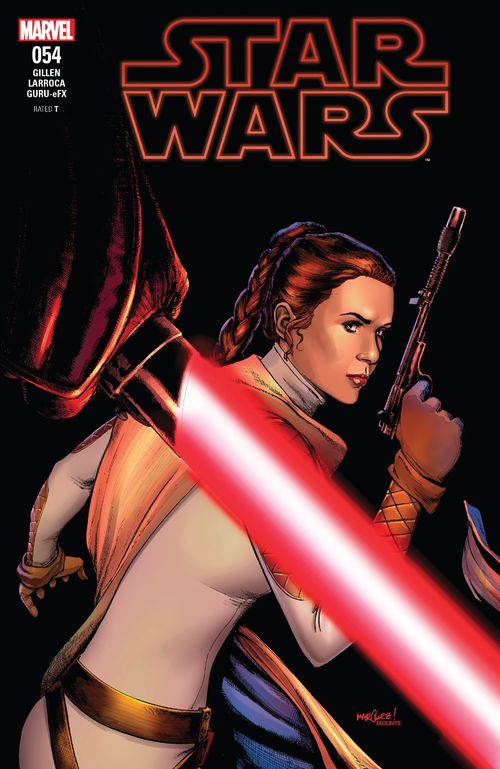 In the last issue, Princess Leia, General Draven and a group of SpecForce soldiers managed to infiltrate the Executor with the goal of finding override code which would help them free the remaining ships of the Rebellion Fleet. Unfortunately for them, Darth Vader is on their tail. 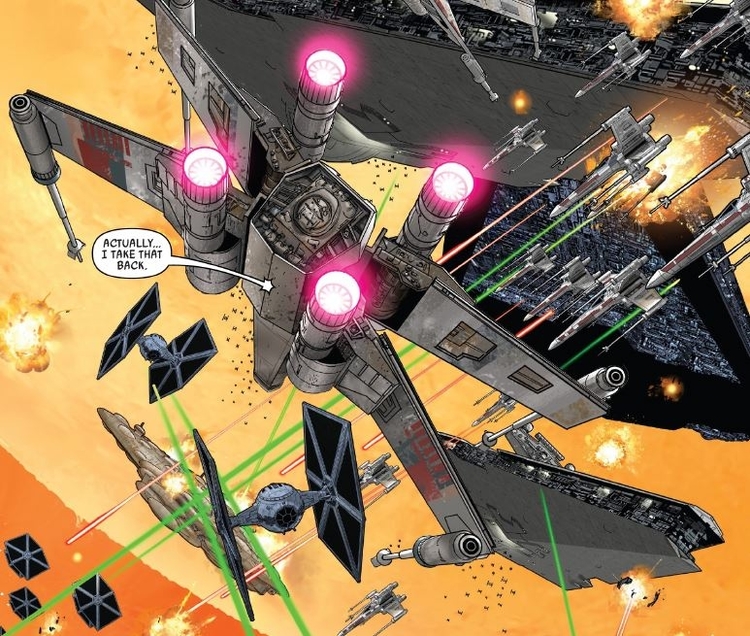 As this issue opens, Han Solo joins the fight in an X-Wing because the Falcon is busted. At the same time, Leia and her team managed to get the needed files. But, to rescue the fleet, they need to escape from the Executor. However, the troops they have left in the rearguard are all slaughtered by Vader and he is in pursuit. 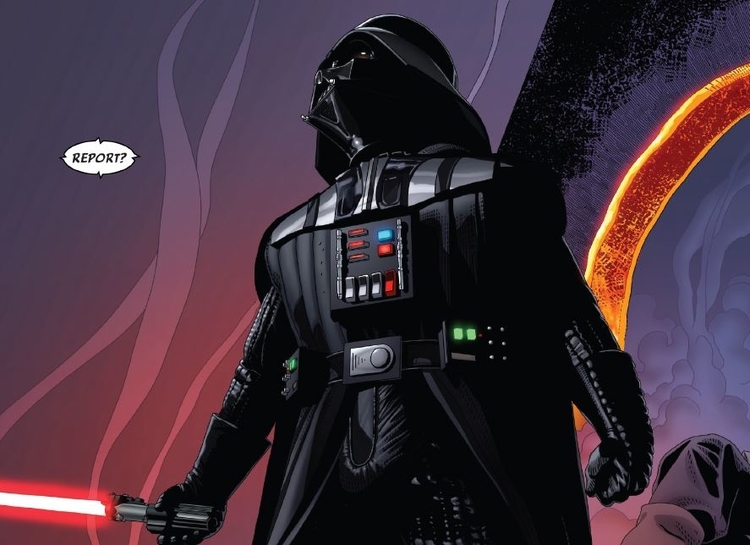 In the docking bay, Leia tells Draven to take the data to the Fleet. But he refuses telling her that she should punish Trios. Also, he was always bothered by the fact that Jyn Erso was the hero and he was wrong. Leia wishes there was time for them to have become friends. Draven and his troops stay behind to slow Vader down, knowing that they will die. And they do, once Vader breaks through the sealed door. All soldiers die from blaster fire deflected by Vader’s lightsaber, while Vader breaks Draven’s neck. 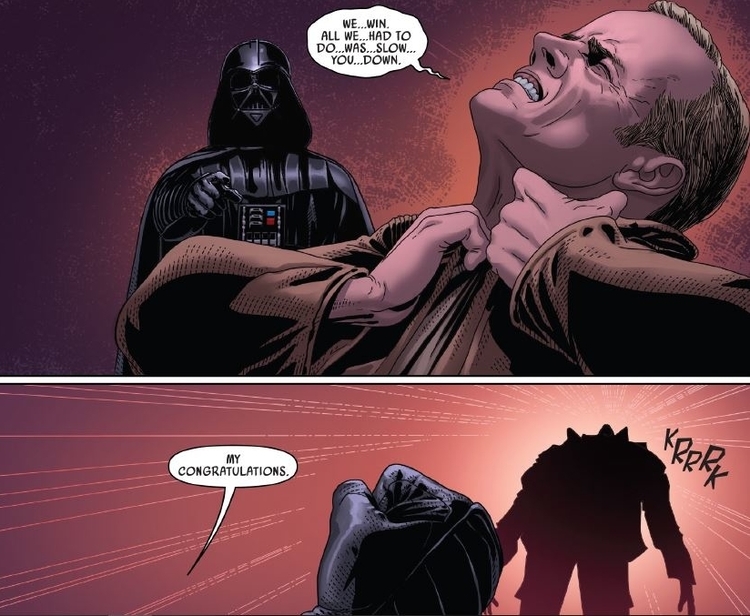 Leia runs away in the last second, but faces a new problem. She doesn’t have a helmet and so no way of communication. In the space above Mako-Ta, she is just another enemy TIE pilot for the Rebellion pilots, Luke and Han included. They can see that the pilot is good, but not good enough. The pilot also doesn’t fly as Academy pilots should. In the midst of confusion, Leia shoots another TIE fighter to show them she is friendly. Luke and Han decide to protect the TIE and lead it to it’s destination. 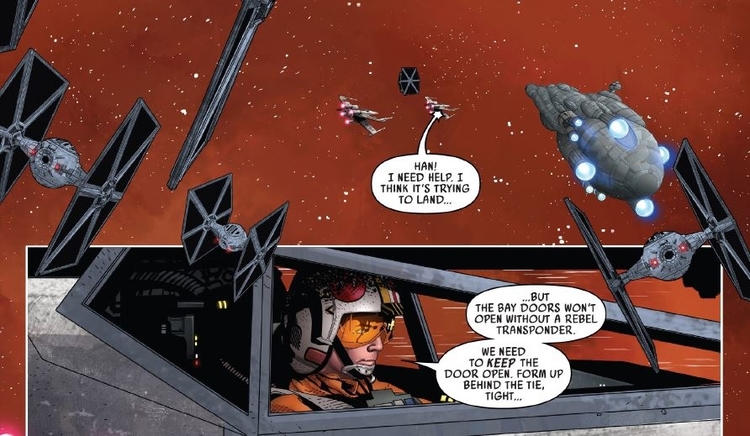 The two men realize that the TIE wants to land, but the bay doors will only open if a Rebellion ship flies first. Luke flies ahead to open the doors but is hit in the process. The moment all systems are operational, Dodona orders the jump to hyperspace. While the files are distributed to smaller ships, but Leia thinks that cruiser has to go back to save more. Dodona wants to save something for the rebellion, but Luke agrees with Leia – there is no time for caution, they have to help their friends.

While Dodona feels the burden of responsibility for the countless lives, in the end he is swayed. 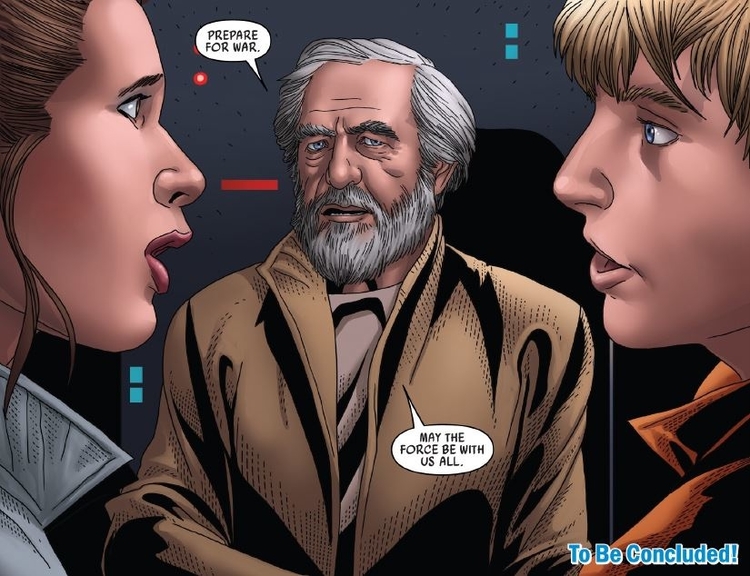 Flagship comic of new Marvel era certainly had it’s ups and downs, but there is no doubt that this arc – Hope Dies – ranks among the highs of the series. It takes a superb writer to bring suspense and weight to the battle whose outcome is know to every Star wars fan. And,  Gillen manages to showcase the stakes through portraying small and secondary characters – whether it’s a technical specialist, mechanic Meorti or General Draven – they all have a role to play and price to pay for the survival of the Rebellion. And the stakes were never higher. The salvation of the Rebellion is in a lion’s den and though the mission is successful, Leia is the sole survivor.

I am glad that Gillen and Larocca got to show us grittier side of the Galactic Civil War in a way we didn’t get to see even in the original trilogy. As always, Larocca excels in depicting space combat and with fewer awkward face renditions, this issue might be one of his better ones.

Some of us liked to hate Draven in Rogue One due to his less than honorable methods, but there is no denying that his actions were always for the good of the Rebellion. His calm acceptance in a face of death for the sole purpose of buying a couple of minutes of time and his defiance when facing Vader show this man’s exceptional courage. He went out like a badass. So long, General Draven.

All of our heroes show signs of maturity and growth, but especially our princess. In the past, Leia would have never accepted Draven’s sacrifice, but has clearly grown as a leader and countless sacrifices taught her the burden of leadership. Still, she is not willing to sacrifice all of her friends for a single ship – she remains loyal to her principles. Additionally, I am glad that Gillen confirmed that Leia is a good pilot as well, a talent she inherited from both of her parents.

As we are heading to the conclusion of this exceptional arc, there is no doubt that it will be explosive. However, I share Draven’s wish that we see not just the outcome of forthcoming battle but also Leia’s revenge on Trios for this unspeakable betrayal. Tap into that Dark Side, Leia! Do it!

Until that happens, make sure to pick up this issue as it is both exciting heartbreaking. If Gillen and Larocca deliver another great issue like this, we will surely be looking at one of the best arcs in this comic run.

• If anyone is to survive this disaster, sacrifice is needed…

• If hope dies, what survives? 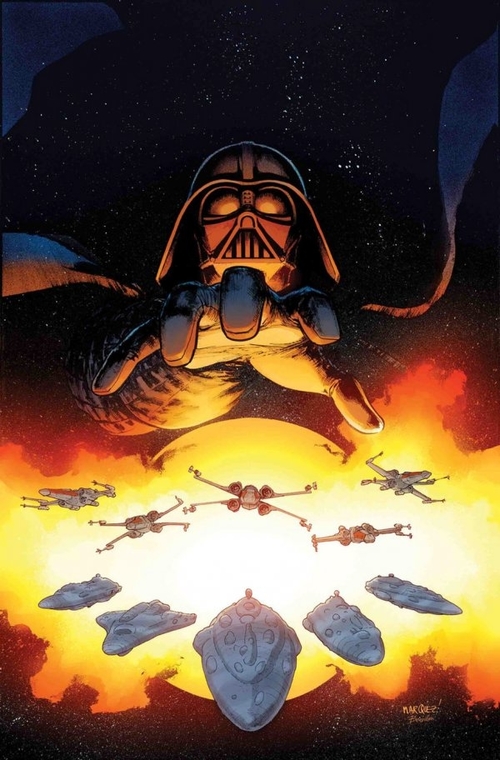