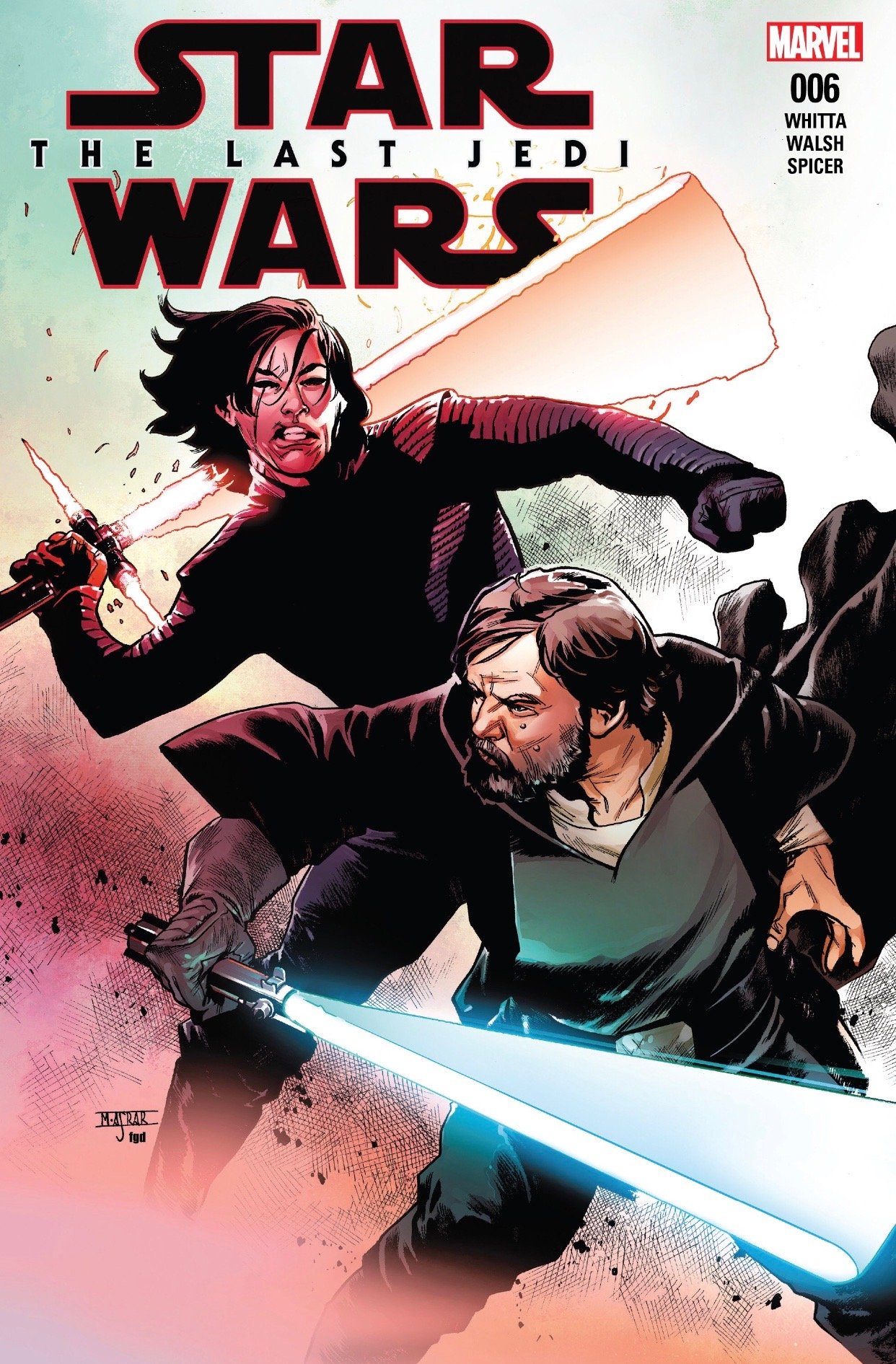 Marvel finishes it’s great run of The Last Jedi adaptation with the sixth issue this week. If you enjoyed the film, this adaptation has given you many of your favorite moments, as well as adding a few that were not in the film. This final issue is my favorite of the series and I think the adaptation was handled very well by writer Gary Whitta. 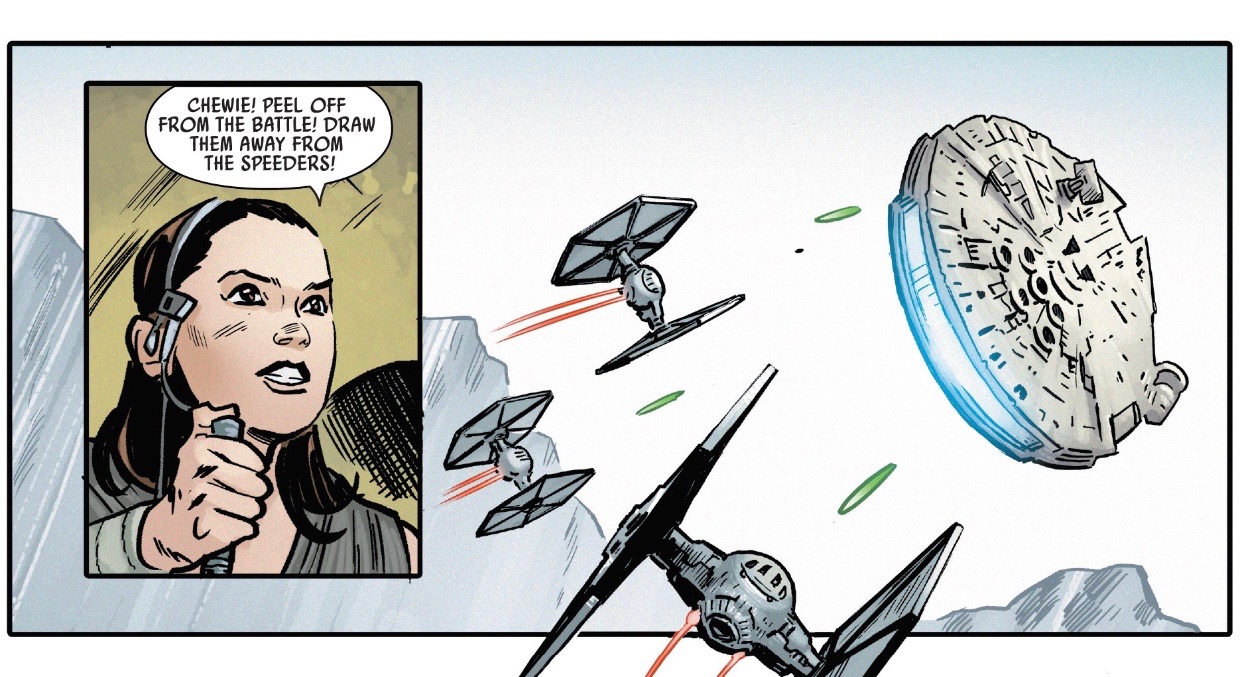 The artwork in this issue is gorgeous. Artists Michael Walsh, Josh Hixson, and colorist Mike Spicer went out on a swan song. It’s almost like the art is a love letter to Star Wars fans and adds so much to so many great moments of the film. Many of the moments are contrasted by the stark landscape of Crait, which brings out the simple elegance of the colors used. I was really pleased with the look of this issue. I’ve been kind of in the middle when it came to the art of the series up until the last issue, but this sealed the deal for me. I was delighted with every page.

See what I mean? Moments like these are captured beautifully in ink and this was one of my favorite frames of the series. It really adds to the relationship of Rose and Finn. Such a tender moment in the story and I couldn’t have asked for a better depiction of it on the page. 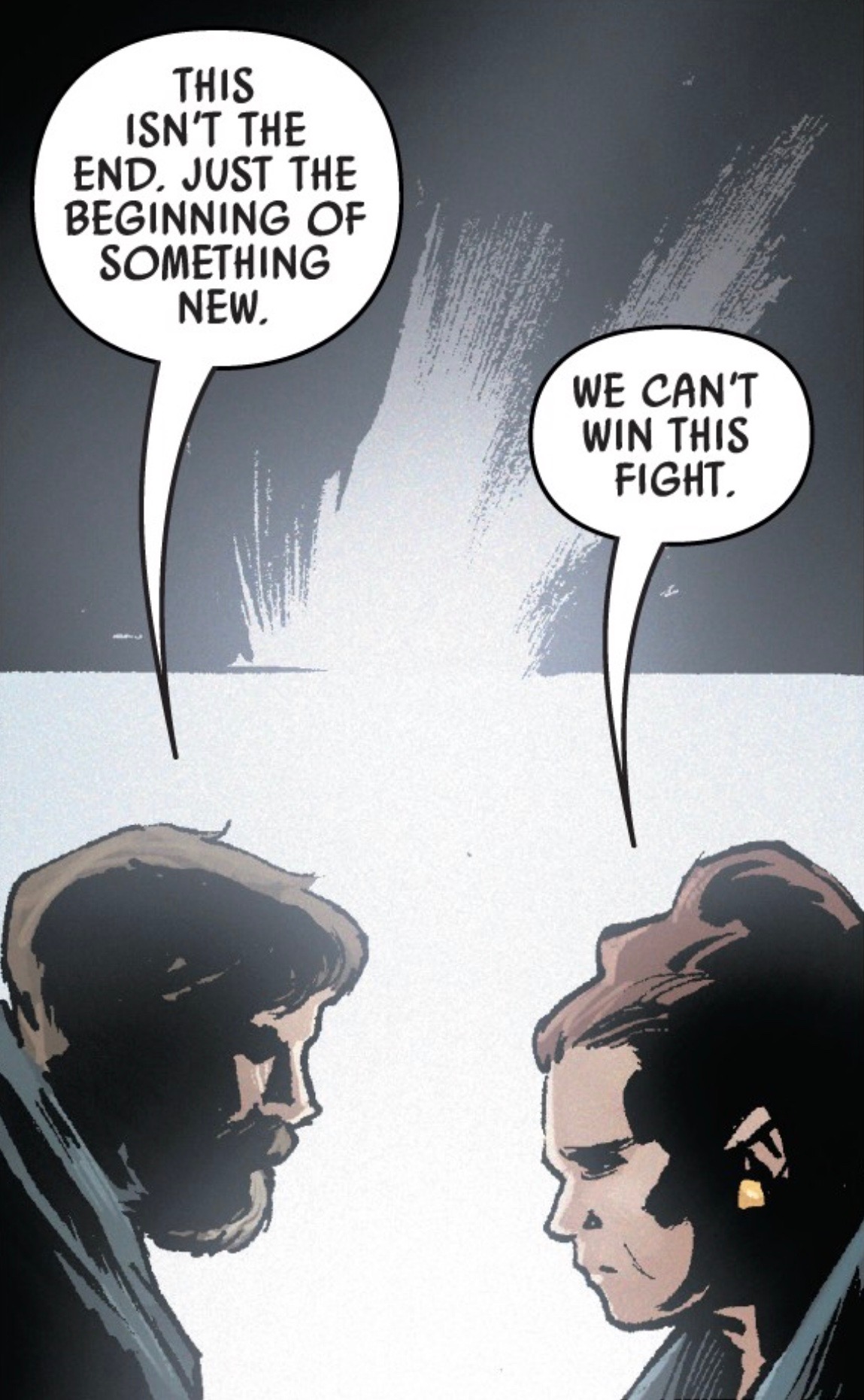 I’m not crying, you’re crying! The last panels between Luke and Leia are heart stopping. The dialogue is a little different, too. To me, it cements that Luke followed his old teacher, Obi-Wan Kenobi, in sacrificing himself to save the Resistance and make sure Rey could carry on the legacy of the Jedi. He says verbatim, “There are alternatives to fighting”. I was clapping when I saw that. The fragility of Luke and Leia is preserved, but there’s a resolve in Luke that felt much clearer to me. This is one of my favorite moments in the franchise, and each time I experience it, it only gets emotionally heavier and better. This adaptation is no exception. 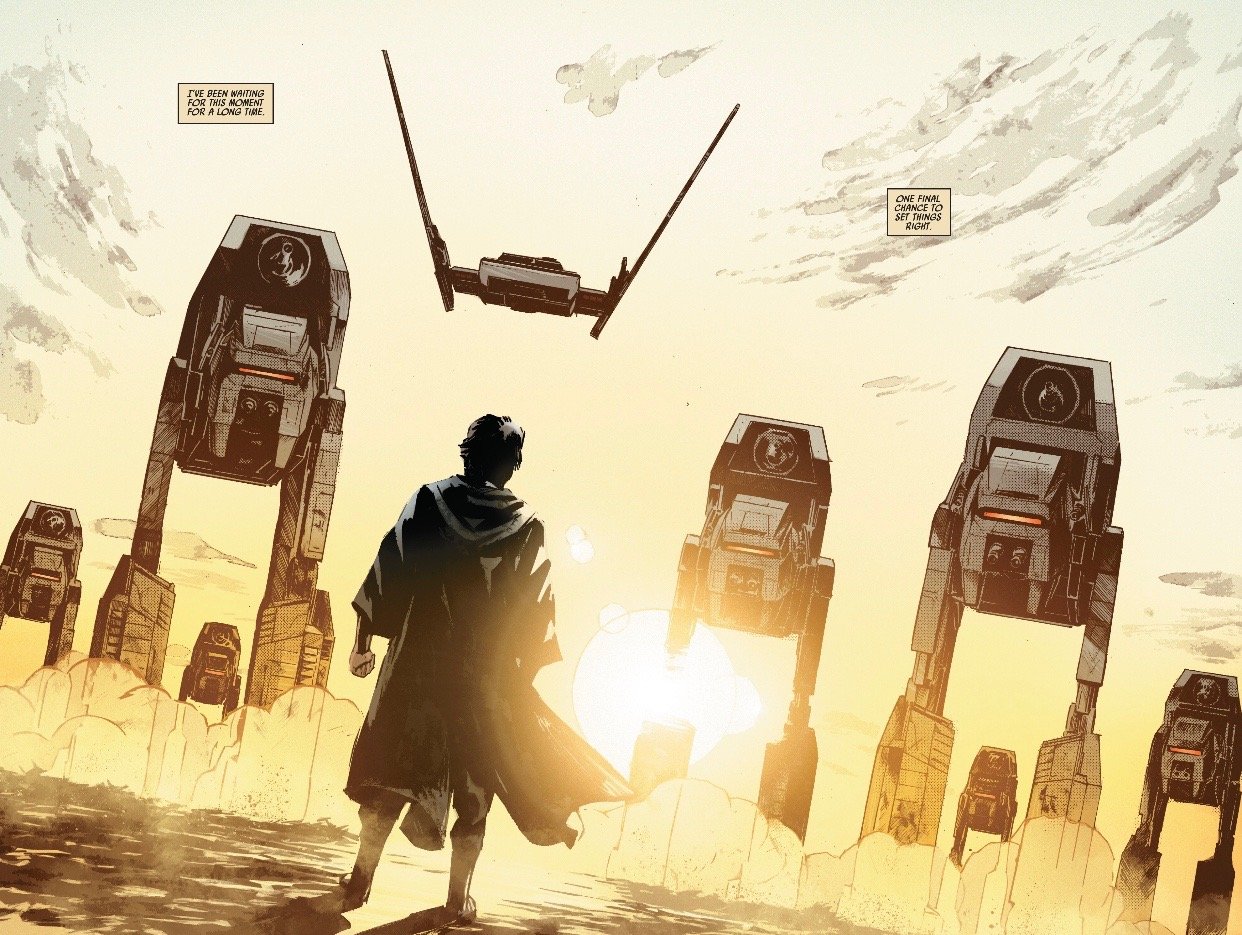 No words. This speaks for itself. 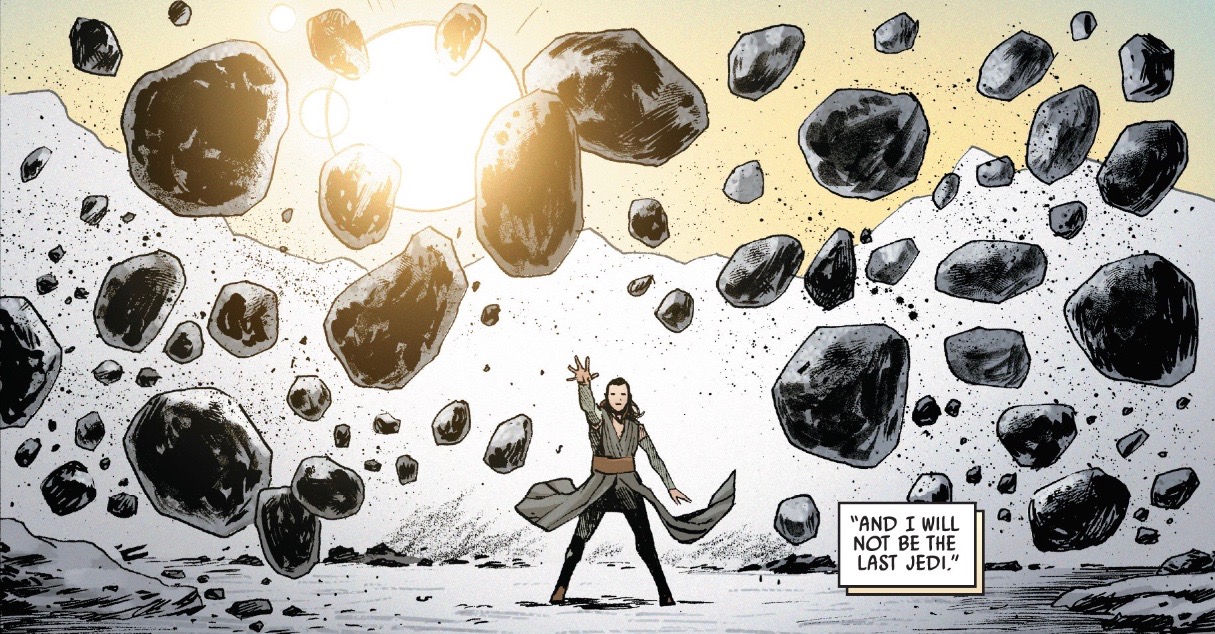 Let’s talk about Rey for a second, shall we? Rey enters The Last Jedi still confused and vulnerable from the discovery of the Force and everything that happened on Starkiller Base. She knows she’s strong in the Force, but unlike a young Luke Skywalker thought in TESB,  she knows she can’t control it. This is a huge fundamental difference between Rey and Luke’s story. With Luke there was a sense of urgency to take down Darth Vader and the Empire. A similar urgency exists for Rey in the struggle against the First Order, but she knows how powerful the Force is and she needs help in being pointed to her path. Luke never really gives her the help she needs until he realizes it’s too late, and the unspoken lesson for Rey is that she needs to depend on herself and let herself be guided by the Force. The moment pictured above hit me hard with all of these realizations, more so than it did when I saw it on film. Both Rey and Luke realize the Force is bigger than them or the Jedi Order, but at this moment in time, Rey and the Jedi are the heroes the galaxy needs. They are the heroes the Force needs, and maybe that won’t be true someday, but it is now. However that leads into Episode IX, it’s a beautiful set-up and additional element to the saga.

The art of this moment between Kylo Ren and Luke seemed to underscore that Luke did not view this confrontation as a fight. Perhaps, in his own way, it was Luke’s final lesson to his lost nephew. I still haven’t decided if Luke felt there was a path to redemption for Ben Solo. His vague “No one is ever really gone” could mean so many things. When Luke says he can’t save Kylo, it could be interpreted as he can’t, but maybe someone else can. Rey couldn’t save him, Luke couldn’t save him, so perhaps this is a hint at the one person who is left to save Ben Solo from himself: Leia. She’s the only person Kylo’s been able to keep himself from killing, and I believe if he would’ve known Rey wouldn’t have joined him he would have killed her right after he killed Snoke. Who knows what would have happened if he’d reached Leia and Rey on Crait if Luke hadn’t intervened; but, I would bet that if there is a path to redemption from Ben Solo it will involve his mother, not Rey.

I’m gonna be very honest here: My biggest problem with The Last Jedi was Luke’s death. I’ve come to terms with it and I accept this ending for what it is, but I’d be lying if I said I didn’t want to see Luke with a green bladed saber taking out the Knights of Ren with Rey in Episode IX. The more I think about it, the more I like the ending, but there’s still a huge part of me that feels a little let down. I don’t blame Rian Johnson, as I feel this ending was probably incredibly difficult for him to write and probably not the ending he wanted either, but it does line up with the story of The Last Jedi perfectly. Our heroes are not always what we want them to be, but they always prove themselves when they are what we need them to be. Despite this being a big problem for me, I applaud Rian Johnson and Mark Hamill for the courage it took to make this scene, and I equally applaud the team of this adaptation for capturing the moment so well here in the pages.

Do with these what you will. Speculate away. Reylo, Ben Solo redemption, Ben Solo death, Rey death… the possibilities are really endless and all fans deserve to have their take without being belittled. I have my theories, but they often change each time I revisit The Last Jedi, so I choose to keep them to myself. This exchange did not happen in the film, so I thought I would share it here for the many fans that are endlessly speculating about where the relationship between Kylo Ren and Rey will go. Also, I loved these! 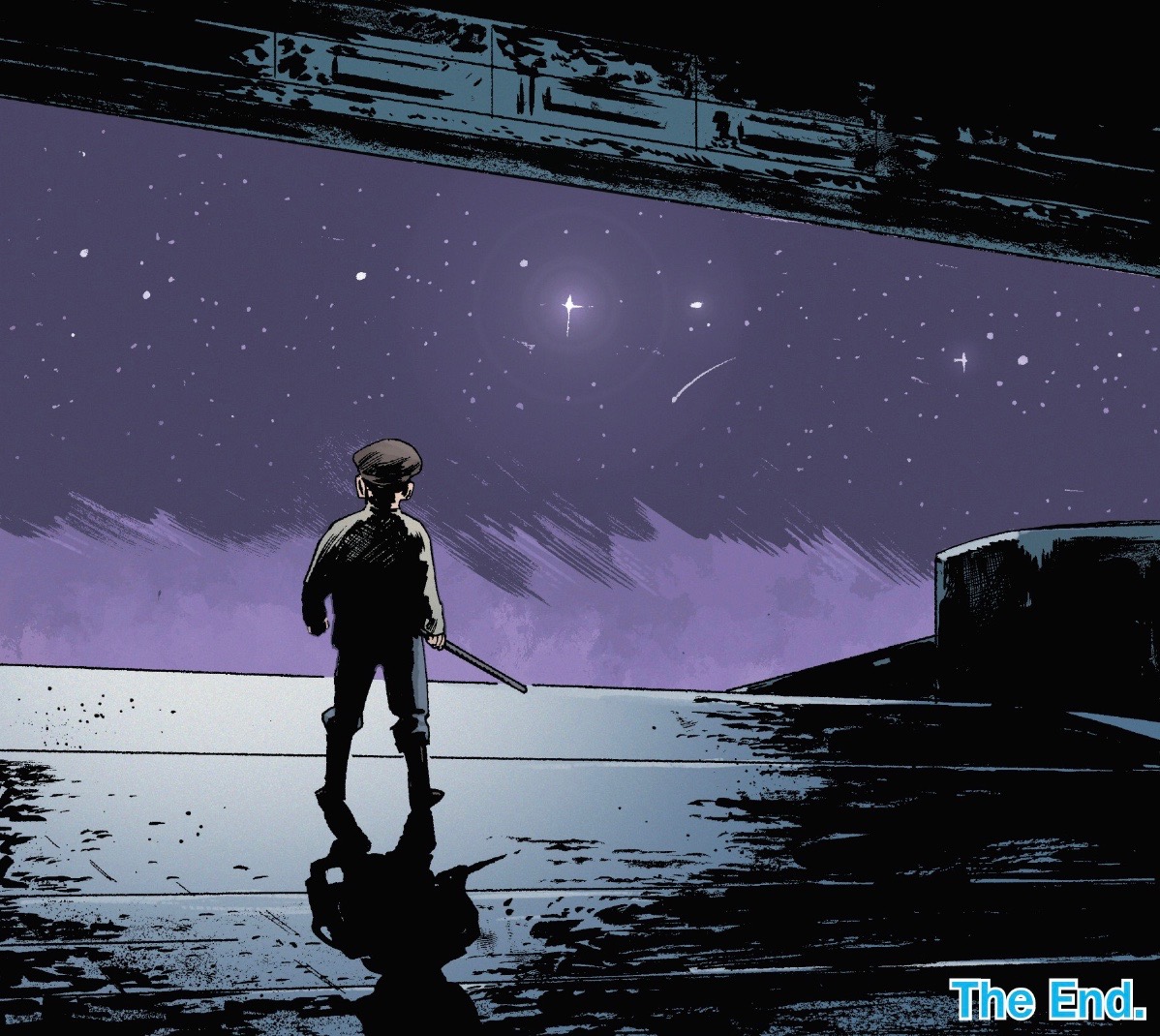 We close with my favorite ending to a Star Wars film so far. Which of us never grabbed a broom or a flashlight as a child to pretend to be a Jedi? I think you’d be hard pressed to find fan who didn’t. This moment still brings a tear to my eye because it’s the ultimate tribute to Star Wars fans on film. I’ll take moments like these over clever Easter eggs any day. I’ll never forget the first time I saw this.

Big congratulations to Gary Whitta, Michael Walsh, Josh Hixson, and Mike Spicer. This adaptation belongs in your collection and is well worth your time. It’s a very close second to my favorite comic adaptation, Rogue One, and will equally add to your enjoyment of the film it’s based on. I highly recommend every issue of this adaptation and it’s another way to experience one of the best Star Wars stories out there.