REVIEW - A Scoundrel To The Rescue In Marvel's Star Wars: Lando - Double or Nothing #4 - Star Wars News Net Go To Top
Skip to content

REVIEW – A Scoundrel To The Rescue In Marvel’s Star Wars: Lando – Double or Nothing #4 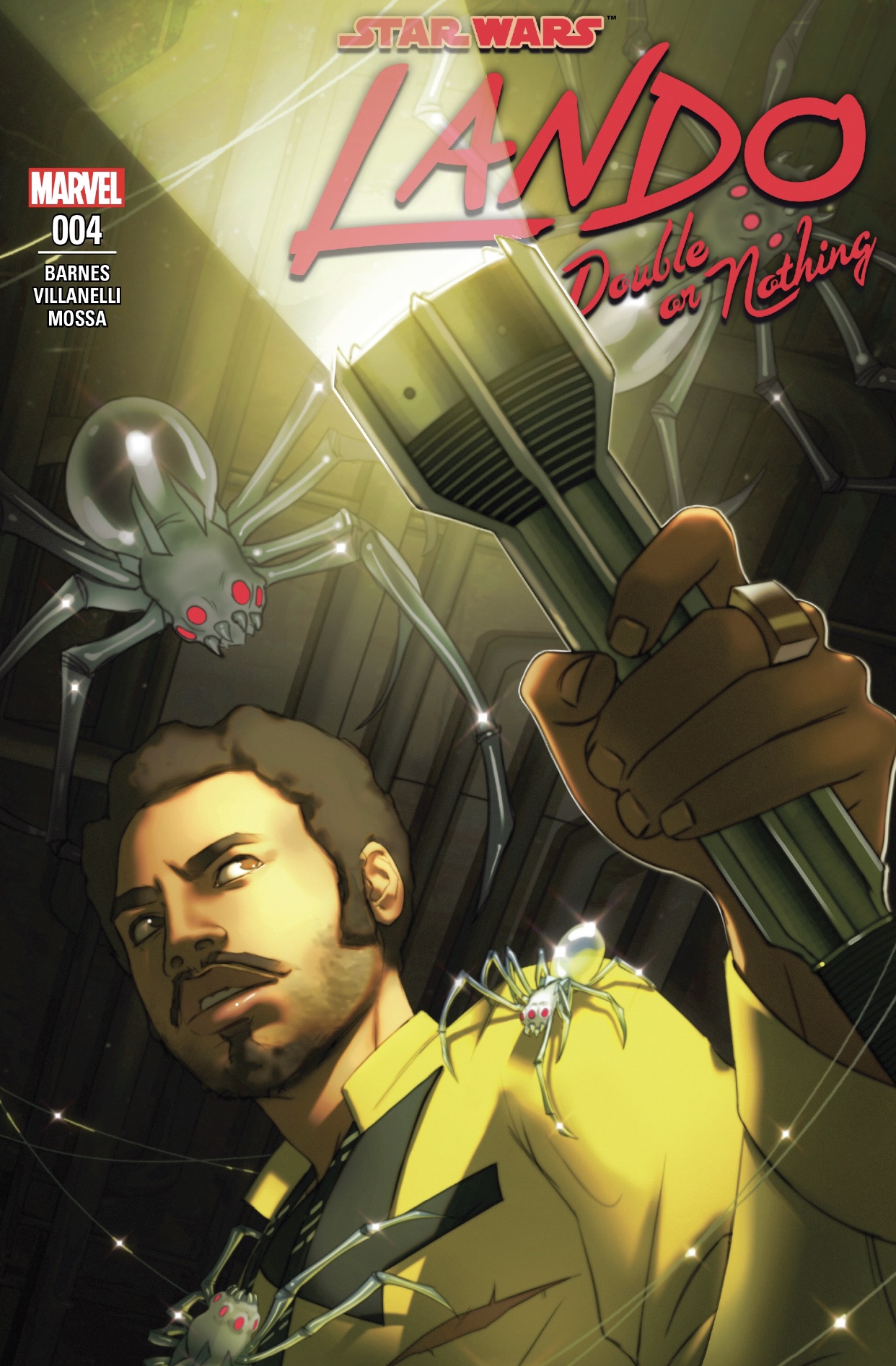 The smoothest smuggler in the galaxy has his hands full on a mission he thought might make him a quick buck, but turned out to be much more complicated than expected. What’s new in the life and times of Lando Calrissian? Lando: Double or Nothing has been a lot of fun to read, and this latest issue is no exception, unless you don’t like spiders. SPOILERS AHEAD….

It really wouldn’t be a proper rescue in the Millennium Falcon if two TIE Fighters weren’t relentlessly in pursuit. Okay, maybe relentless is a bit generous when referring to the pilots whose life will most likely end in a fireball of flames. Well, these pilots actually get unluckily lucky, as Lando and Elthree fake their own deaths while swooping into a narrow cave and blasting it shut, mimicking an explosion to throw the TIE Fighters off. Once they’ve landed, Lando realizes Elthree guided them into the droid facility through a sewage pipe. He and his elegant cape brave the murky waters, but it’s not the smell that throws Lando for a spin.

Spiders…or the Star Wars equivalent. These little buggers come at Lando and he’s ‘forced’ to use his blaster. I love how Lando always reminds the audience violence is his last resort, though I’m sure it’s tongue-in-cheek, since he’s proven to be a skilled swordsman and marksman. These little spiders attack Lando in their smaller form as a swarm, but also come together as one giant spider. If you suffer from arachnophobia, you may want to flip the pages a little faster. Still, pretty cool and creepy entrance into the droid facility. Once Lando has blasted the spiders into oblivion, the rescue begins. 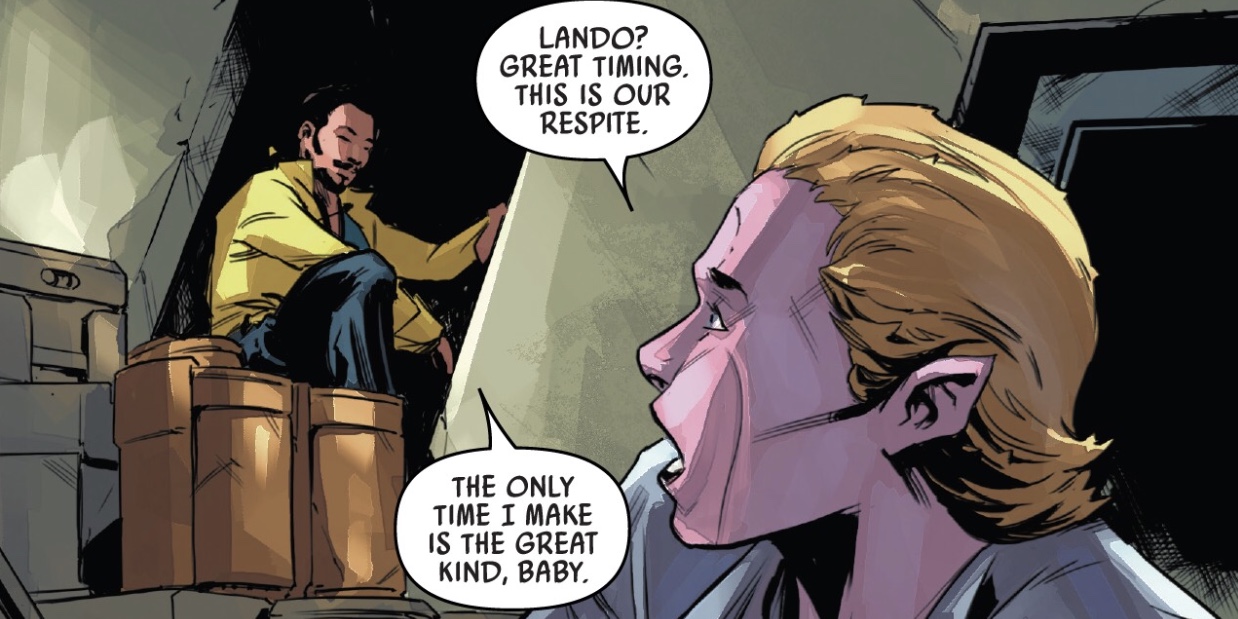 As mentioned in earlier issues, the Petrusians have given up hope in rebelling against their Imperial jailers. Kristiss and her father think that hearing from a fresh voice like Lando might help, so as he documents the ‘Calrissian Chronicles’, Lando becomes orator and tries to inspire the broken people to take up arms against the Empire.

Great to see Lando’s aspiring leadership shine here. We know where Lando ends up, and it’s kind of brushed off by Han that he conned someone out of Cloud City, but once we are there we see Lando is a natural leader. Like Han, Lando is one of the good guys who may act selfish from time-to-time, but there is no moral ambiguity between good and evil for him. Sure, he may write this off as a way to ensure his payment, but look at him go.

The Petrusians are on board and ready to break out of this droid factory. First thing, they have to go back to the Falcon to get weapons from Elthree. The only time the Petrusians can strike is when the stormtrooper security rotation happens, which is imminent, so time is of the essence. 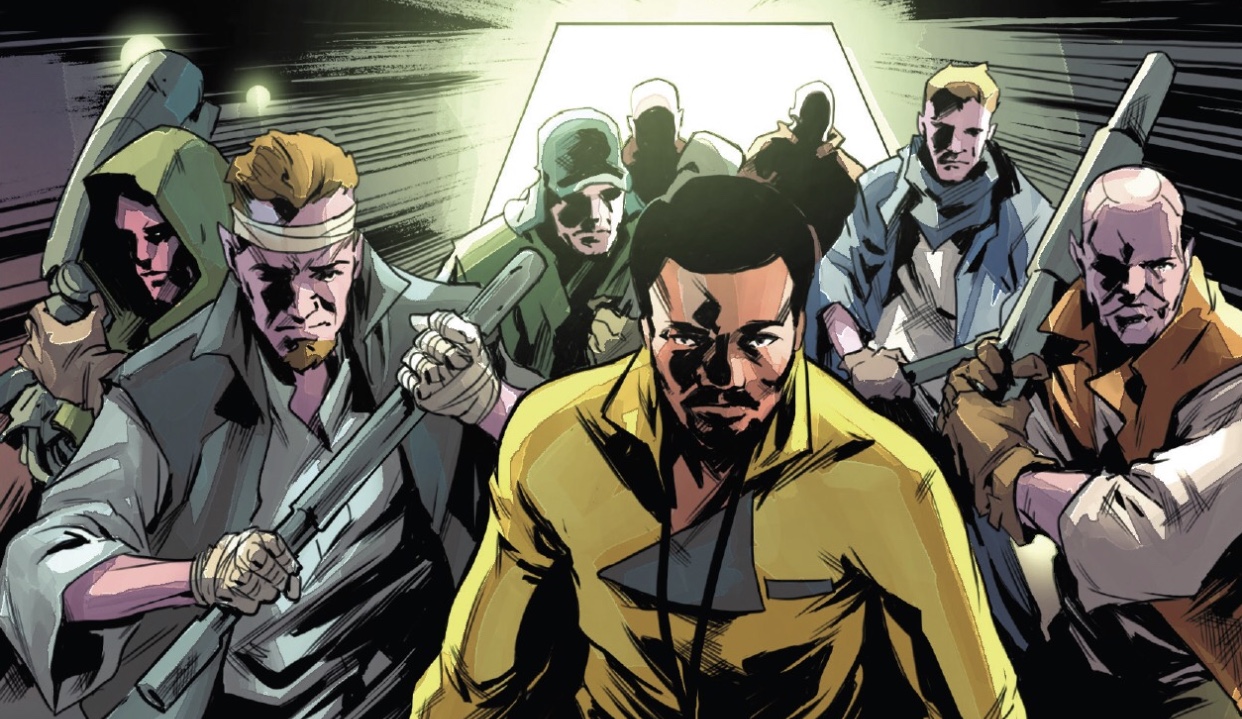 The artwork in this series works perfectly with the tone of the character and the story. I love what artists Paolo Villanelli and Andres Mossa have done with each issue. For such a bleak setting, they’ve really added vibrancy to the story. Lando looks great and every frame stands out on the page. I’m surprised we haven’t heard about George Lucas scooping these pages up from the Lucasfilm archive like he did for the Han Solo series. I’ve been delighted with the art in this series.

Lando and the Petrusians get to their weapons, and the Falcon deals with one more giant spider waiting for them. The climax of this issue is a little anticlimactic, as we see a shuttle dusting off and leaving a limited amount of stormtroopers behind to wait for a fresh batch. The Petrusians sneak up on them. Lando sees the spark of hope in the Petrusians and how powerful the oppressed can be when they rise up in numbers. Not just numbers, but the power of hope. Lando leads the charge and we’ll have to wait until the next issue to see how the Petrusians face-off against the bucket heads.

This series has been great and you would hear no complaints from me if Marvel kept it going beyond the limited five issues. Writer Rodney Barnes has a great handle on the multifaceted character of Lando Calrissian, and he’s really captured what Donald Glover brought to the smooth talker in Solo. True, not a whole lot happens in this issue, but there are some great moments. Watching this jail break start got me excited for the next issue, and there’s also some nice moments between Elthree and Lando. I’m also loving how Lando calls pretty much everyone in this issue ‘baby’ at some point. Marvel, please keep this series going past five issues or bring it back in the future. Would love to see more of Barnes’ writing in the Star Wars canon and I’d love more Lando stories set in this time periods, as well as many others. This issue of Lando: Double or Nothing is well worth your time and money, as is the rest of the series. 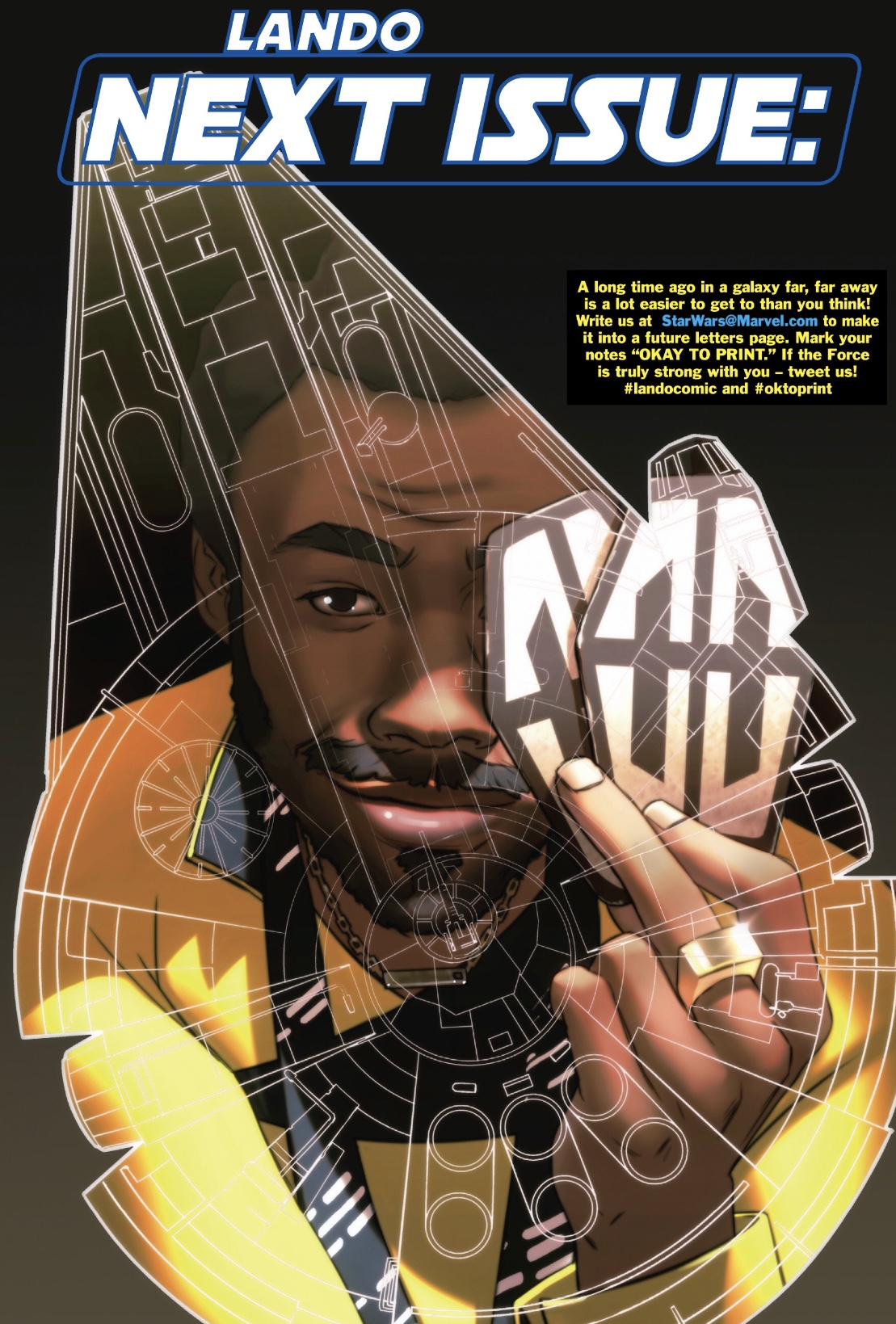