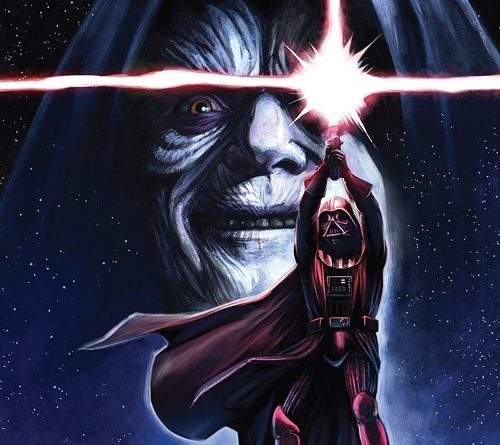 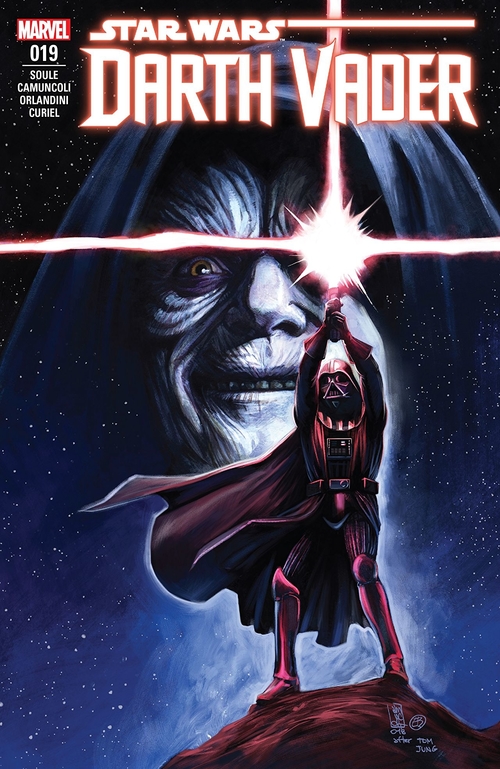 This week’s issue marks the beginning of a new arc – Fortress Vader.

The issue opens with the birth of a little girl to a Zabrak couple. The happy occasion is interrupted by the arrival of Darth Vader who reveals that the father is the former Jedi, Eeth Koth. The man tries to negotiate with Vader, claiming that he has no love for the Jedi and that he is simply a priest now. He claims he is not a threat to anyone, and he is even willing to help Vader if only he would leave his family alone. But, we all know that there is no bargaining with the Dark Lord. Eeth is forced to fight in the hope that he will enable his wife and daughter to escape. 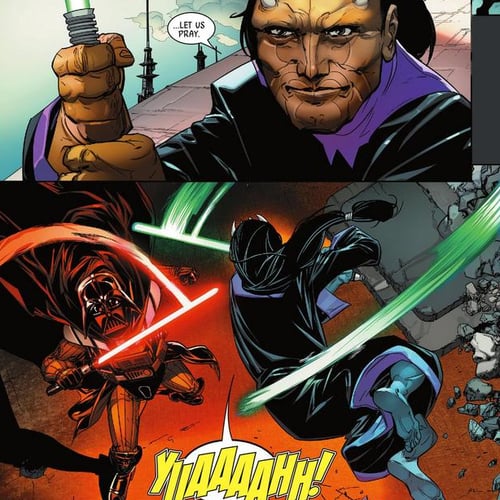 As they fight, Vader baits Eeth by talking about his feelings – fear, resentment, anger – and how they are giving him power. The former Jedi claims that his power comes either from his Zabrak blood or the fact that he has something to lose now.

Vader orders the inquisitors – including a couple we haven’t seen before – to find and bring child to him, while the woman is irrelevant. As he continues to battle with the former Jedi, they organize the search. The woman – Mira – attempts to reach the ship operated by another Zabrak, but is intercepted by the inquisitors. 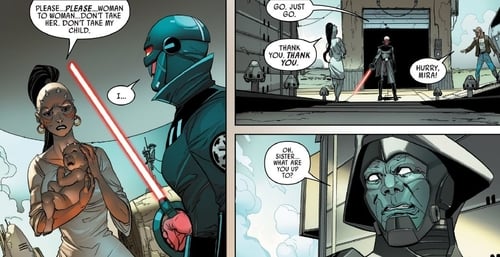 Mira appeals to the unknown female inquisitor and she seemingly lets her go making the other inquisitors question her actions. But, the female inquisitor never had any intention of letting the baby slip through her fingers. She just planned something much crueler. 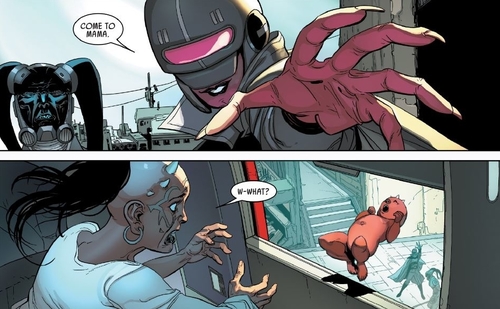 Mira would probably never trust another woman (or anyone) again, and by taking her baby, the inquisitor took her soul. And, it seems, she also took Mira’s husband, because the appearance of the captured baby is sufficient to distract Eeth and allow Vader to kill him.

Back on Coruscant, Vader meets the Grand Inquisitor. The mission was a success. The baby is given to a couple of creepy attendants and Vader inquires about the next target. 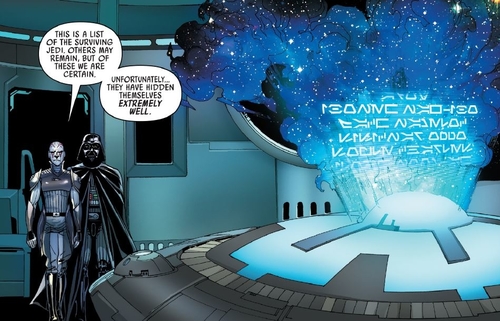 The Grand Inquisitor presents Vader with the list of known surviving Jedi: Yoda, Obi-Wan Kenobi, Council members Oppo Rancisis and Coleman Kcaj as well as Selrahc Eluos and the barely visible Ka-Moon Kholi (whose names are clearly based on Charles Soule and Camuncoli). The remaining surviving Jedi have hidden themselves well. Without any clues, there is no hope for the Inquisitorius and Vader to find them. All they can do is wait for one of them to slip up.

In the meantime, “Project Harvester” will continue. We have heard of this project before. In the book series Servants of the Empire, Dhara, the sister of Zare Leonis (Star Wars: Rebels) was kidnapped and sent to the planet Arkanis to be turned into an imperial agent strong in the dark side of the Force. The kidnapped Zabrak baby is intended for this project as well.

Vader, clearly dissatisfied, retreats to immerse himself in the dark side, repair his suit and continue training. 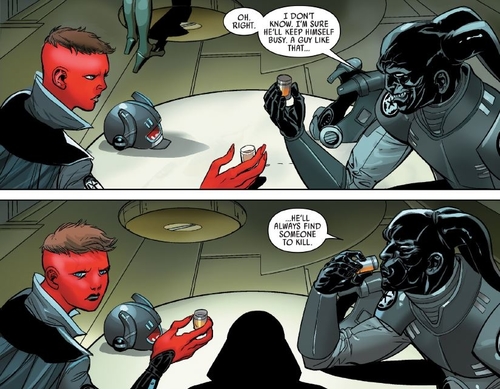 The issue closes with the inquisitors celebrating the death of another Jedi. The woman wonders what Vader would do once all of them are gone. Her Twi’lek partner (Have we ever seen a black Twi’lek before?) states that he is certain he would find someone to kill, just as Vader’s shadow appears above them. Judging by the cover of the next issue, he most certainly did.

As single issues go, this was clearly a setup issue. It shows how the role of the inquisitors is slowly changing and reveals Vader’s growing dissatisfaction (Is it any wonder he asked Tarkin to challenge him?). While it does not move the story significantly forward, the issue does open up a lot of possibilities for future stories. The fact that two Jedi Council members are on the list of surviving Jedi is the least of them.

One of the more interesting aspects of the issue is former Jedi Eeth Koth. We have seen different stories of the surviving Jedi. Some continued on their Jedi path either by trying to actively work against the Empire (Jocasta Nu) or by biding their time (Yoda, Obi-Wan). Others lost their way while never turning to the dark side (Kanan before encountering the Ghost crew). Eeth chose to start a life which was denied to him as a Jedi – to find deeper, human connections and start a family. It is clear that he didn’t completely abandon the spirituality since he took a position as a priest. The simple life with ordinary human desires make his story even more tragic.

Soule and Camuncoli are able to balance the action and the emotional, quieter moments which paint a bigger picture of the galaxy – Palpatine’s plans are bigger and crueler than the simple extermination of the Jedi. While the lightsaber fight and the inquisitors are sufficiently flashy to satisfy the eye, it is a mother’s desperation at losing her child and a father’s face when he realizes that he cannot protect his family that tug at the reader’s heartstrings. The writing and art are perfectly complimented by David Curiel’s coloring to provide an exceptionally vibrant issue even in the midst of dark events.

The issue might not be among the most exciting in this comic run, but it provides enough clues to promise a bright future for the series…

…in the NEXT ISSUE: 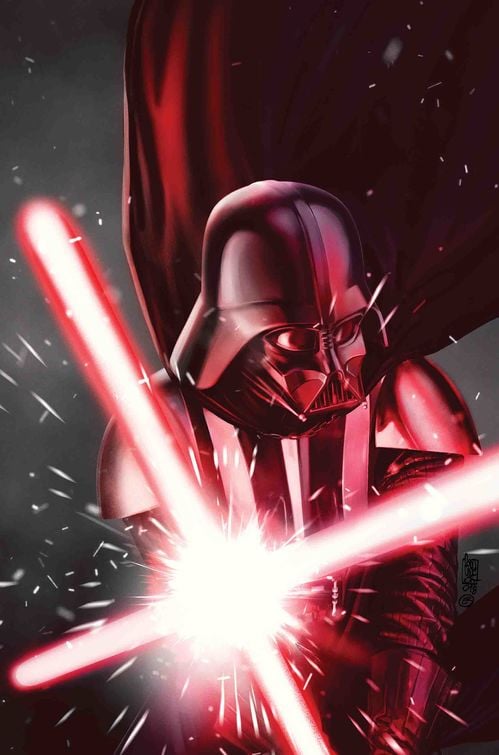 FORTRESS VADER PART II – A thief faces the consequences for their crime. EMPEROR PALPATINE rewards DARTH VADER with three gifts…A thing, a choice and a voice.

Until then this issue gets 7/10 STARS. 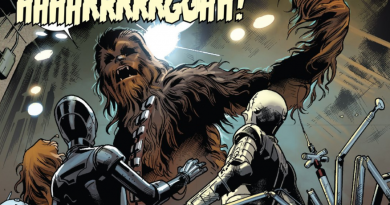 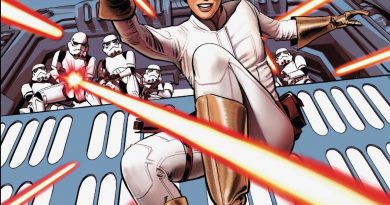