Reminisce with a Dazzling Star Wars: Attack of the Clones Replica Poster Coin 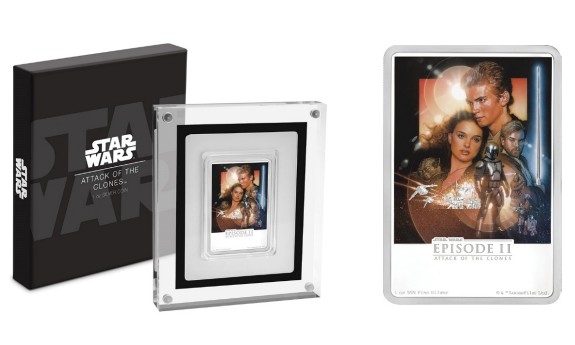 2018 POSTER COIN: STAR WARS: ATTACK OF THE CLONES – AVAILBLE TO ORDER FROM TODAY!

This striking new coin from New Zealand Mint celebrates the second of the prequel movies which was released in May 2002, almost three years to the day after the first prequel. It is the fifth coin in the officially licensed Star Wars Poster Coin Collection.

This 1oz fine silver collectible features a replica image of the original poster for Star Wars: Attack of the Clones. In a technology triumph, the new digital format for Star Wars: Attack of the Clones made this movie appear crisper and more colourful than its predecessors. Some considered it to be the most viscerally exciting of the Star Wars films, crammed with intimacy, spectacular action, and a dark side. The use of both colour and engraving has been effective in bringing the movie to life on this coin.

For easy display, the coin is presented in a clever perspex holder. The uniquely numbered Certificate of Authenticity sits within the packaging, which is also Star Wars branded to further complement the coin. Making this a great memento for any Star Wars fan.

With only 10,000 coins available to purchase worldwide, don’t be late in adding this one to your collection!

If you are keen to be one of the first to hear about Star Wars precious metal products from New Zealand Mint, you can find them on Facebook, Twitter or sign up here to get Star Wars product news emailed directly to your inbox!