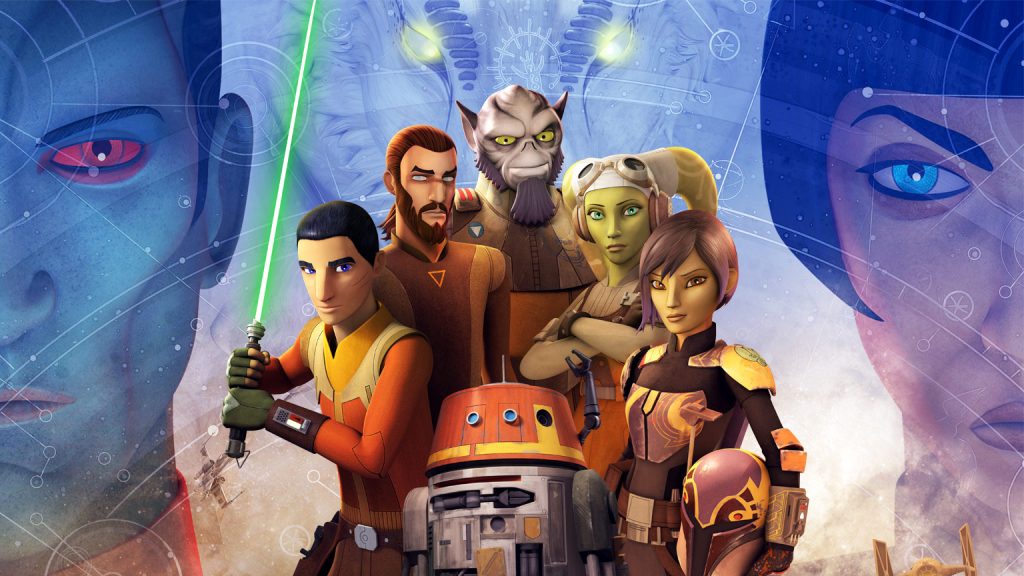 As the Star Wars universe continues to grow into an even larger multi-media monster with the constant additions of new movies, novels, comics, and video games, one of the brightest and best pieces of the puzzle has been the animation department. Dave Filoni has emerged as the creative force behind arguably some of the best story telling in the Star Wars universe to date. Filoni’s most recent show Star Wars Rebels just completed an outstanding four season run on Disney XD.

IGN recently sat down with the Jedi Master of animation himself to reflect on the journey so far, as well as take a small look at two upcoming animated Star Wars series, Star Wars Resistance and the highly anticipated return of Star Wars: The Clone Wars.

IGN: Obviously, Star Wars Rebels has been such a passion project for you. As you were wrapping it up, were you exploding with creative energy to complete your vision, or were you almost dragging your feet because you didn’t want it to end?

Dave Filoni: Well, I loved making the show. There’s no doubt about that, but I didn’t really even think about it being over until we were done with the final mix. There was so much to do, and I was trying to just go through the story again and again and again to get it to be as good as it could possibly be. And everybody I think was focused on that. We didn’t have time to be sad about it. We just had to really land the airplane that was Rebels really well, and I think we did.

I became excited because so many things start to naturally fall in place. But I did have to call a lot of creative retakes – especially on the final two episodes, because you just felt it wasn’t good enough; we wanted to set things up with such a bang and really have the fans get the ending that they deserved, so everybody did a great job at being flexible and working hard to get the best possible ending we could. 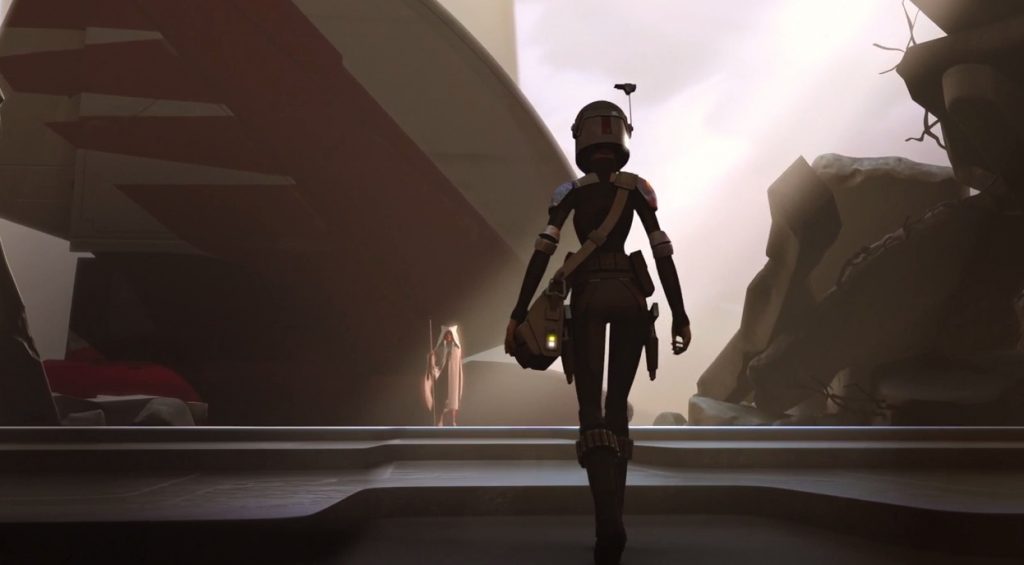 What kind of tweaks are you talking about in terms of getting to that great ending?

I think it’s a lot of situational things. There was a previous version of Ruhk’s confrontation with Zeb that I just thought didn’t really go anywhere, and it didn’t play out right and it didn’t feel special. It felt like something we’d always seen before, so we completely re-staged that portion of it.

There were things about Ezra’s confrontation with the Emperor that I kept going over and over on to get the wording just right and to make that gateway between his world and the world of his parents clear. And I kept questioning that, right up to the end.

And then there were all kinds of secret things I had on the side that not even most of the crew knew about, which was the epilogue ending. A very small group of people worked on that, and I actually had to cut it down, lose some shots, just to get the whole thing to time. So there were a lot of things to juggle when you’re dealing with different levels of logic throughout the story, but we made the changes we needed to. I think it came out good.

Below, Filoni discusses some of the mythology of the Force that went into both Rebels and The Clone Wars, and how the fundamentals set forth by George Lucas all those years ago are still incredibly important to both Star Wars as a whole and him personally. 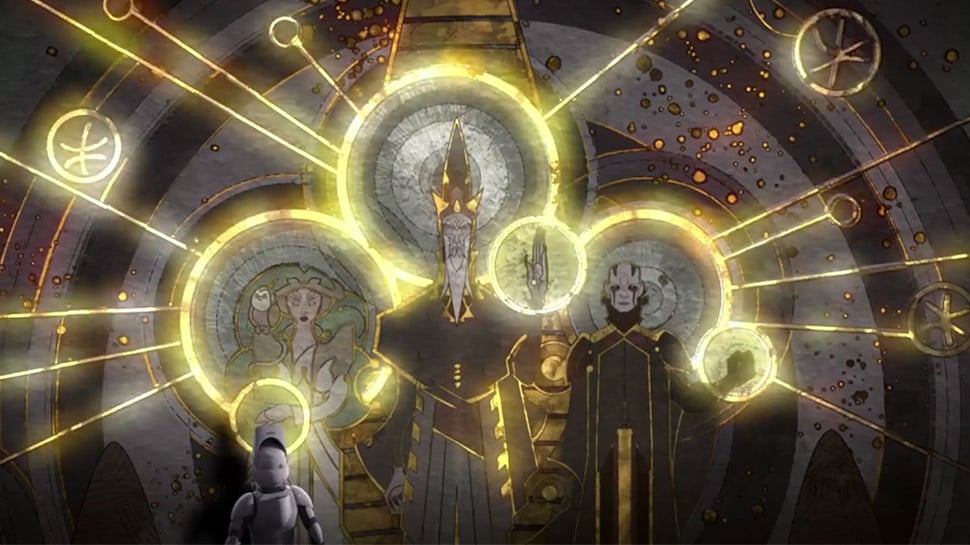 One of the things you got to do in terms of mythology on Rebels was really add a lot of dimension to the whole concept of the Force. Why was that important to you?

Well, the Force is the most core important thing in Star Wars, the magic of it, and you have to be careful when you flesh it out because you don’t want to rob from the magic of it by over-explaining it. But I’ve had a lot of talks with George about it and what was important about the Force, and I thought I had an opportunity to further some of those themes, to really set them down so people have more examples of what George believed the Force was about – its selfless nature versus its selfish nature, about when you wield it, what the results of that can be, and [how to] relate to it on a very personal, human level.

I got a little bit more into what I believe is the living Force that we used to talk about, and somewhat the Force that’s all around us – the Force of nature. A lot of people focus on the light side and dark side through the Jedi or the Sith, which is those people taking the Force and using it for their own will, sometimes selflessly and sometimes selfishly. But it’s a little bit different, and understanding the idea that the Force exists apart from the Jedi and the Sith. They don’t have sole dominion over it. And so I was bringing some of those ideas a little bit further out into the open that we had dealt with George on the Mortis trilogy and then the Yoda Arc in Clone Wars.

So it was really fun and people seemed to really like the ideas and like the stories that we told. And that, again, I credit back to the source material and the fundamental ideas that George set down.

There’s obviously a lot of Star Wars storytelling ahead in your future. Can you give me a sense of what you’re working on, and how the characters you’ve developed for Rebels may fit in to those plans?

I just look at, always, the big picture of Star Wars, not just the stuff I’m working on. I try to be aware of what everybody’s doing and look for tiny opportunities or make sure we’re not repeating. There are many levels you have to work at and wrap your brain around so that people are always getting something unique and meaningful in our vast variety of storytelling that we’re doing now in Star Wars, from the comic books all the way through the feature films. We all stay in touch through the Story Group to try to be aware of what each other are doing. For me, it’s fun because I have been involved in so many things that, whether I’m the person actually doing it or just giving somebody a thought to consider, it feels good to be a part of it.

So right now, Resistance is a bit different, in that I’m not on that day-to-day. I created and set it in motion, but I’ve given that to other people to raise up, people that I’ve worked with a long time, who I think deserve the opportunity to tell stories and I think it’s exciting, and I give them my thoughts and notes – I was just doing that this morning, like George would give me. So that’s fun.

And then obviously with Clone Wars I’m very in the weeds on that and will have to be, because I myself have had to go back and watch a whole bunch of stuff that I had done, and I went back and watched Revenge of the Sith and Attack of the Clones in depth again. I’m like, “I have to upload this whole timeline.” Just the intricacy of how the clones got made and where Dooku was and all of those things were stuff that I was just doing from memory at the time, because I was in it. Then I switched time periods and went on and did Star Wars Rebels, so to go back into Clone Wars, I have to remember, “Wait – where was everybody? How did that work?” And I had charts and figured all this stuff out, but I’ve uploaded the chip now, so I’m good.

It was pretty interesting, but I had some fun conversations with people and I went “Where’d that come from?” And they’re like “Well, you did that!” and I’m like “Oh really, I did? Wow, okay.” Star Wars is so rich in detail that you’ve got to keep refreshing to remember it all. But I’ll tell you, I’ve met kids that know it way better than I do, and they will hold you to task on the smallest thing. I always say, you show me a ten-year-old, I’ll tell you a kid that knows more about Star Wars than I do. They will ask me a question that I do not know. So we’ll see: I hope I get it right for them all. Of course, they’re all now 15, 16, those kids, so…

It is interesting to see Filoni begin to pass the storytelling torch to those he has mentored, similarly to how Lucas helped pave the way for him with The Clone Wars animated series.

So with Clone Wars, are you starting at square one with this new season that was just announced, rather than use the existing material that was already laid out from its previous development? Or is it a mixture of both?

Without getting too much into detail – because I love the fan speculation – but it would be a real shame to have done all this work and not use it. So we are looking at everything and going over all those scripts we had. I think that the biggest thing for me is “how do we make this show better?” And I think that means examining all the work we had done, the work we were planning on doing, and also trying to honor the work of so many people that were in the middle of making stuff.

And I want to make sure that some of the things we were doing come to light, so it’s exciting, it’s a great opportunity, but my main focus is how do we do this the best we can do it, and give this great story the new, exciting episodes that it needs? Which is what we did every season on Clone Wars: “How do we make the next season better?” So the focus is on being better than before, but absolutely on looking at stuff we haven’t [used].

Some of the fans already know because even though the trailers are… it’s four shots, really, and there’s a lot in those four shots that I put in their specifically for people to decrypt over the next however-long-it-is until this thing is out. And they will, they will! They’ve probably done it already. But it’s all part of the fun in digging deep on clips and seeing what’s there.

It certainly seems like the future of Star Wars animation is a bright one and there is no one better to lead the way than Filoni. With Star Wars Resistance on the horizon later this year followed by the hugely anticipated return of Star Wars: The Clone Wars in 2019, Star Wars fans have plenty to look forward to.

You can read the full interview at IGN