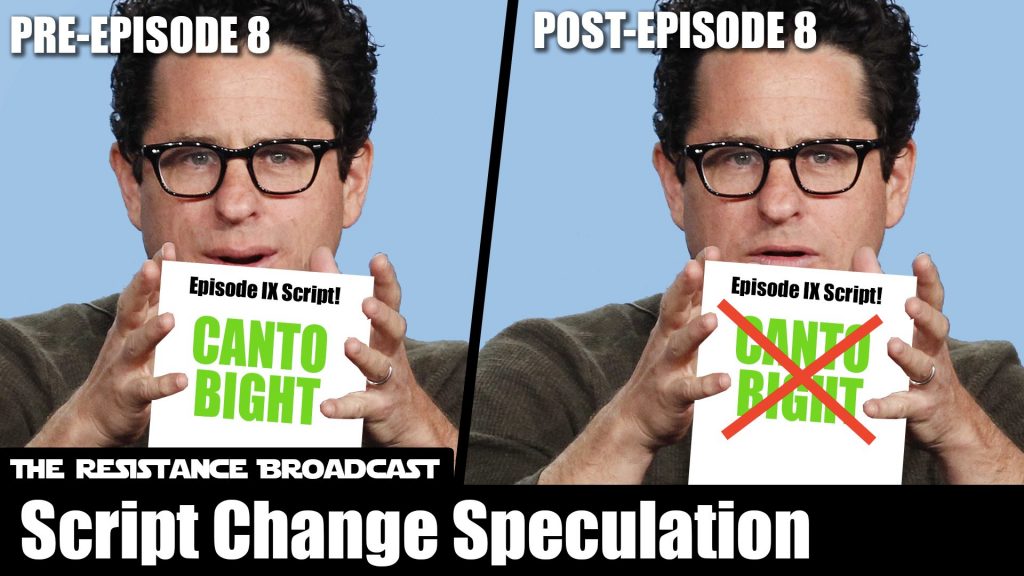 On this episode we have some fun speculating whether we think J.J. Abrams may have tweaked and changed the final draft of the Episode IX script after some of the reaction to The Last Jedi!

We also introduce a NEW segment “The Will of the Force”, where we run down a bunch of possibilities and we each say whether we think they will or won’t happen! To cap it all off, as always, we hear from you in #ResistanceTransmissions! Come join the fun!

On this transmission of The Resistance Broadcast: John Hoey and James Baney!

This week’s DISCUSSION has us discussing whether J. J. Abrams decided to tweak some things in his final draft of Episode IX after some of the divisive reaction towards The Last Jedi. We have no direct knowledge of this in any way of course, but we speculate and wonder if some of the things we’ll see in the final installment will be due to some of the reaction towards the middle chapter. James and John both have clear differing opinions on this, and while it wasn’t a STAR WARS WAR, you’ll want to check it out!

This week in RESISTANCE TRANSMISSIONS we asked you: The final shot of Kylo Ren in The Last Jedi has him connecting one final time with Rey as she boards the Falcon. He says nothing, but the shot is zoomed in on his face. What is going through Kylo Ren’s head in this moment BEFORE Rey closes the door on him?

The only way to support our ability to give you two free weekly episodes is by buying some of our awesome designs. Head to our Resistance Broadcast store on TeePublic – check out our 25+ different design and pick what you like.

Do you want to own the most adorable Star Wars themed T-shirt of all time? Well now you can with Gary Fisher dressed as a porg! It is GARY THE PORG! You can get him on a shirt, coffee mug, tank top, sticker, hoodie, pillow, anything!

Most adorable #StarWars T-shirt ever???

One of our most popular shirts, Carrie's dog Gary wearing a porg costume, it's our famous #GaryThePorg! ON SALE today here: https://t.co/vP9annUXmB pic.twitter.com/t55fzxRkTD