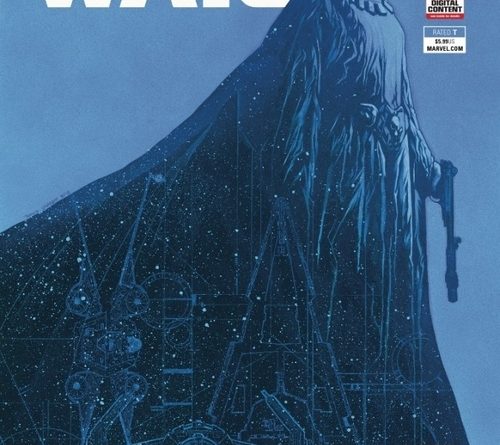 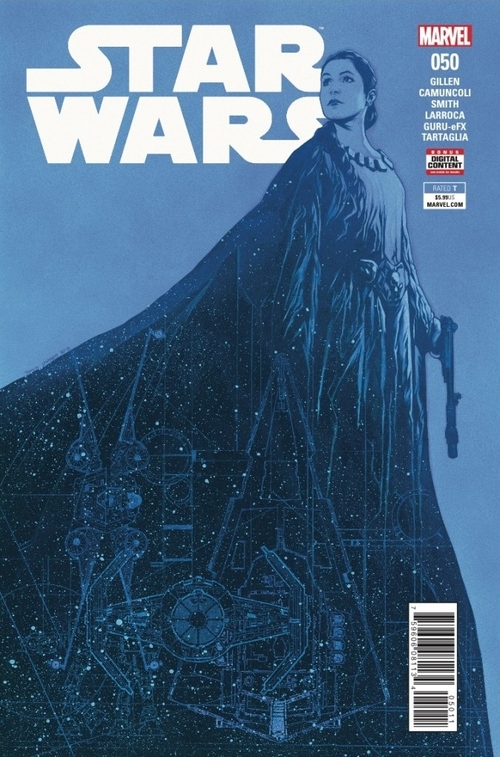 Hope Dies Part I – IN THIS ISSUE…HOPE DIES. The REBEL FLEET is completed. It’s magnificent. It’s beautiful. It’s secret. But no secret is kept for long from DARTH VADER. The most epic story yet done in a STAR WARS comic begins here. Prepare to witness the Empire TRULY strike back.

When we left our heroes in the last issue, they were preparing to celebrate the launching of their newly completed fleet led by twelve Mon Calamari cruisers in their base on Mako Ta. Unbeknownst to them, Queen Trios of Shu-Torun has betrayed them to Darth Vader. 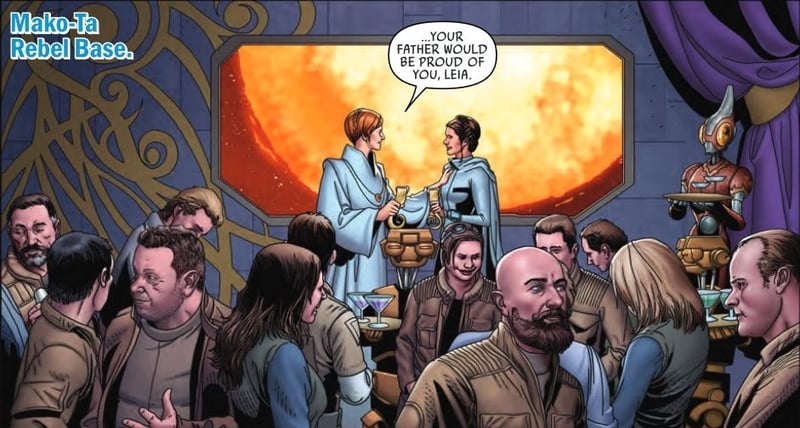 As this issue opens, the celebration is in full swing, and Mon Mothma is in attendance. Leia is embarrassed by Mothma’s compliments for her part in the creation of the fleet. When she joins Queen Trios, wanting to make her feel more welcomed, she also rejects Trios’ claim that she single-handedly created the fleet. Everyone working together played their part. It is impossible not to contrast Leia’s impassioned words with what Trios is saying as we now know to read her every line with double meaning. 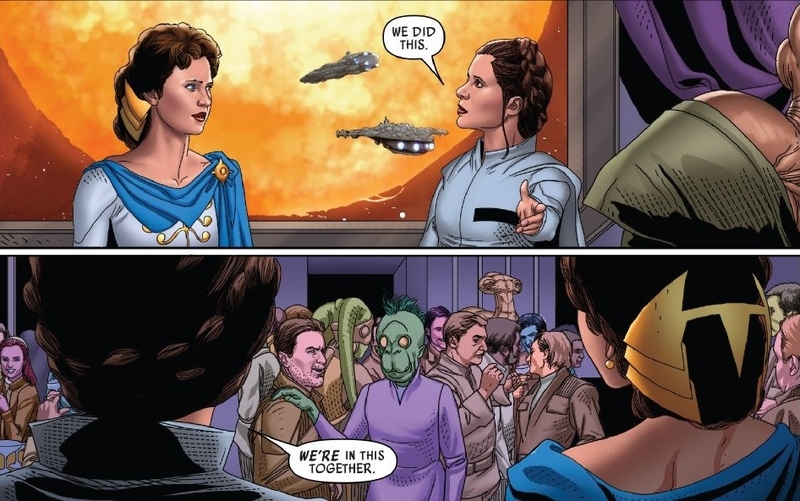 In the meantime, Han Solo is gambling on the Ring of Kafrene with the help of trusted interpreter, C-3PO. Chewie warns him about bounty hunters who are clearly hunting him for Jabba’s reward. After the two manage to disarm them, Han promises that he will pay his debt to the gangster. Chewbacca regrets missing the celebration, but Han doubts Leia would want him near all the dignitaries. He does regret missing Luke’s show though. 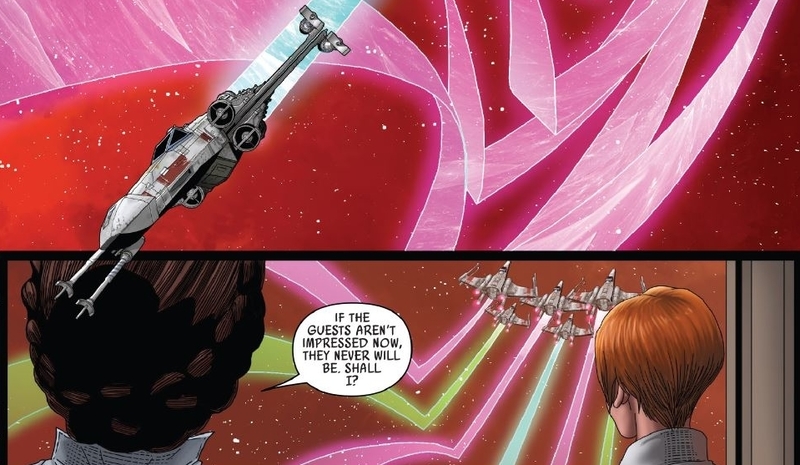 Around the Rebel Base, Luke is a part of aerial show prepared for the guests. The fleet is ready for commencement: after Mon Monthma’s speech, the fleet, divided in subgroups (one led by General Hera Syndulla) is ordered by Dodonna to disperse in hyperspace to be engaged when needed. However, they find that they are not able to jump to hyperspace. Leia is unable to contact Dodonna, when she realizes that Trios is missing. Her message to the fleet is delayed: This is a trap. 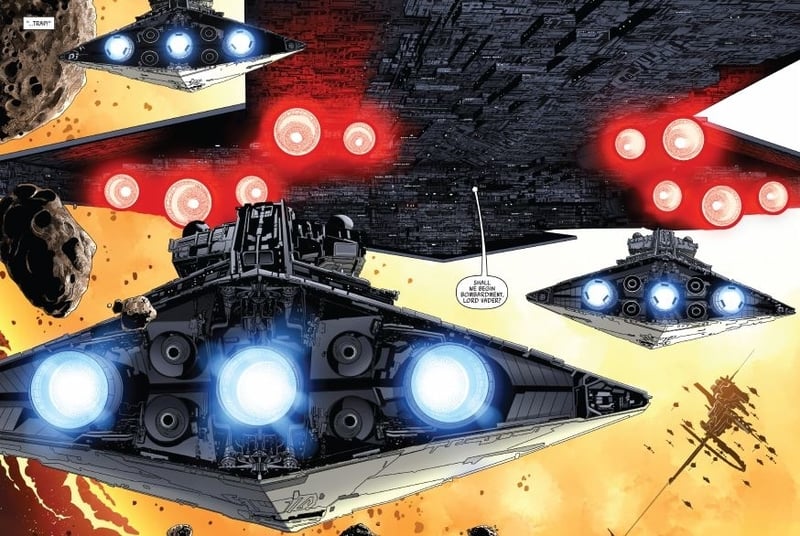 Aboard the Star Destroyer, Vader orders his forces to wait, because he is not yet satisfied with the level of fear emanating from the Rebel fleet. He wants to give them time to understand the hopelessness of their situation. The Imperials have blocked communications and locked down the Rebellion’s artillery, and to make matters worse, the bay doors won’t open for the fighters to engage. The Rebels are sitting ducks in space.

Finally satisfied with the panic he had caused, Vader orders the attack on the nearest cruiser. The Rebels helplessly watch as General Willard’s ship is destroyed. Vader’s next target is hope itself. 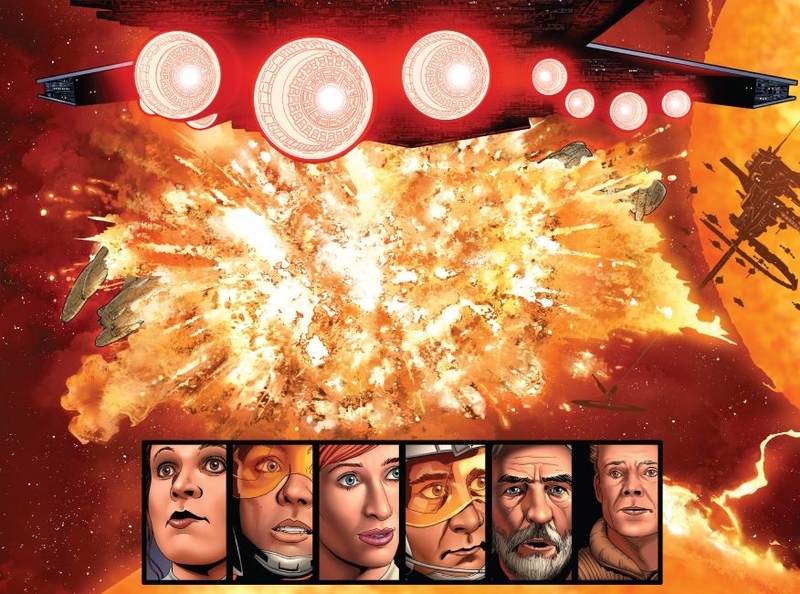 The second part of the issue, penciled by Giuseppe Camuncoli, shows us how Vader’s plan was conceived. Months before the attack on the Rebel fleet, Vader is getting reports from Admiral Ozzel and General Veers on Mustafar. Ozzel claims they are only able to engage smaller targets, but the Rebels are everywhere. Veers notices that the Rebels are like weeds: during the storm, they bend, but when the storm passes, they are unharmed. It would be different if they were the tree. This makes Vader think. 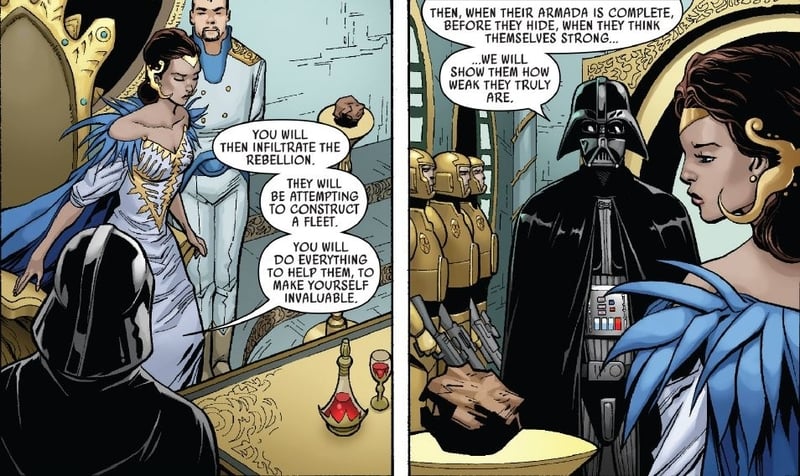 Vader visits Shu-Torun where he requests Trios’ help. Now, all the cards are revealed: everything from Trios’s assistance to the Rebels on Jedha to her help in the attempt to free Lee-Char was planned by Vader. She is to make herself invaluable and help the Rebels create the fleet. Once they are all in one location, secure in their safety, Vader will destroy them.

Naturally, there must not be any witnesses to this plan. Vader kills all of Trios’ associates. We are now seeing just how far is Trios willing to go for the sake of Shu-Torun.

When we eventually see the Rebel fleet in the Return of the Jedi, it is not nearly as impressive as depicted in Star Wars #50. And now we know why. If the resolution of the Original Trilogy was not seared in our minds, we would definitely have reason to fear for the very existence of the Rebellion at this point in the series. The Imperial plan is so nefarious that it could only have come from a mind of the Sith: help the Rebels create their impressive fleet and then destroy them in one fell swoop.

And it might have had worked. The Rebels, so unaccustomed with things going their way, take Trios into their confidence with the open arms. Someone so open-hearted as Leia cannot even conceive the possible betrayal. It was truly heartbreaking watching her being grateful to Trios as well as read Mothma’s hopeful speech looking into the future. I have liked the character of Trios since she first appeared in Darth Vader Annual #1, but she has reached the point of no return for me. There is only so much pity and understanding you can extend to someone so callously indifferent to the death of her own people as well as death and destruction of the Rebellion. I want her to meet her final end at the hand of the Sith she so diligently serves. We know that Vader does not suffer failure, and we know that the plan to completely wipe out the fleet will ultimately end in failure.

I have been very critical of Larroca’s art in the past, but I have to say that he truly excels in the depiction of ships and space combat: both his depiction of the Rebel fleet and the Imperial forces were magnificent and something no Star Wars fan would be ashamed to hang on their wall. 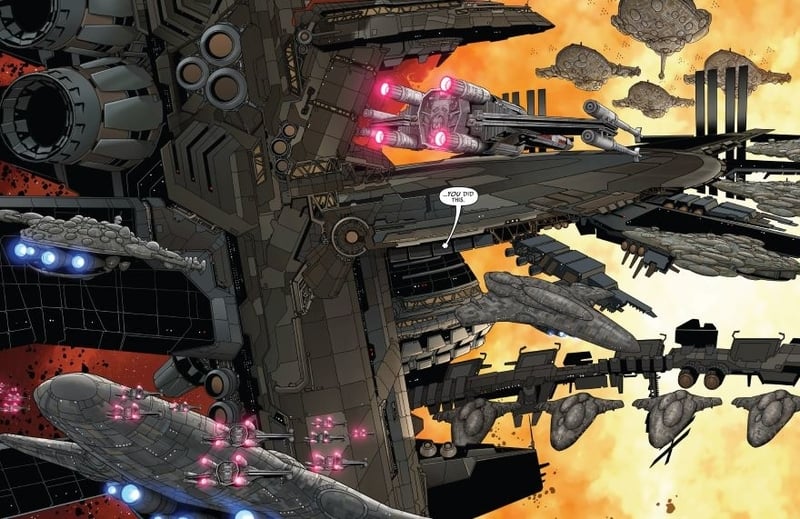 The most chilling part of the issue is certainly Vader waiting for the Rebels’ fear to reach ‘appropriate’ heights and feeling satisfaction when he feels their terror. Due to the ‘cool factor’ of black armor and the mask, we as Star Wars fans often forget the depths of depravity Anakin Skywalker has fallen into and Kieron Gillen kindly reminds us of that. I can say that he made good on his promise of ‘event level tragedy’ in this issue and I cannot wait to see what he has in store for us in the subsequent issues. But, until then… 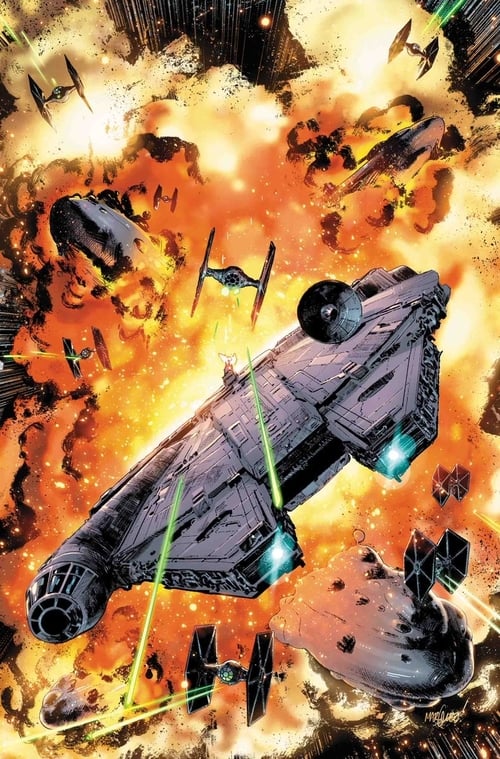 • The MILLENNIUM FALCON – alone – versus an entire IMPERIAL FLEET.
• Can LEIA discover the cause of this disaster?
• And even if she can, is it too late? 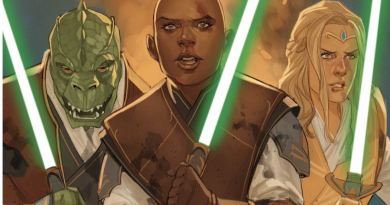 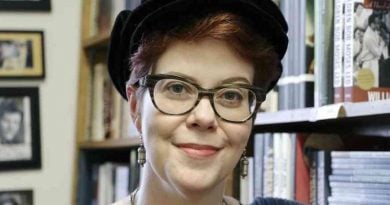 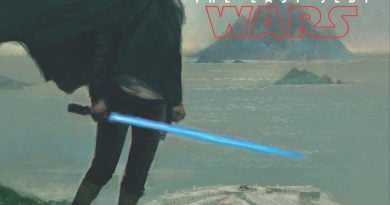