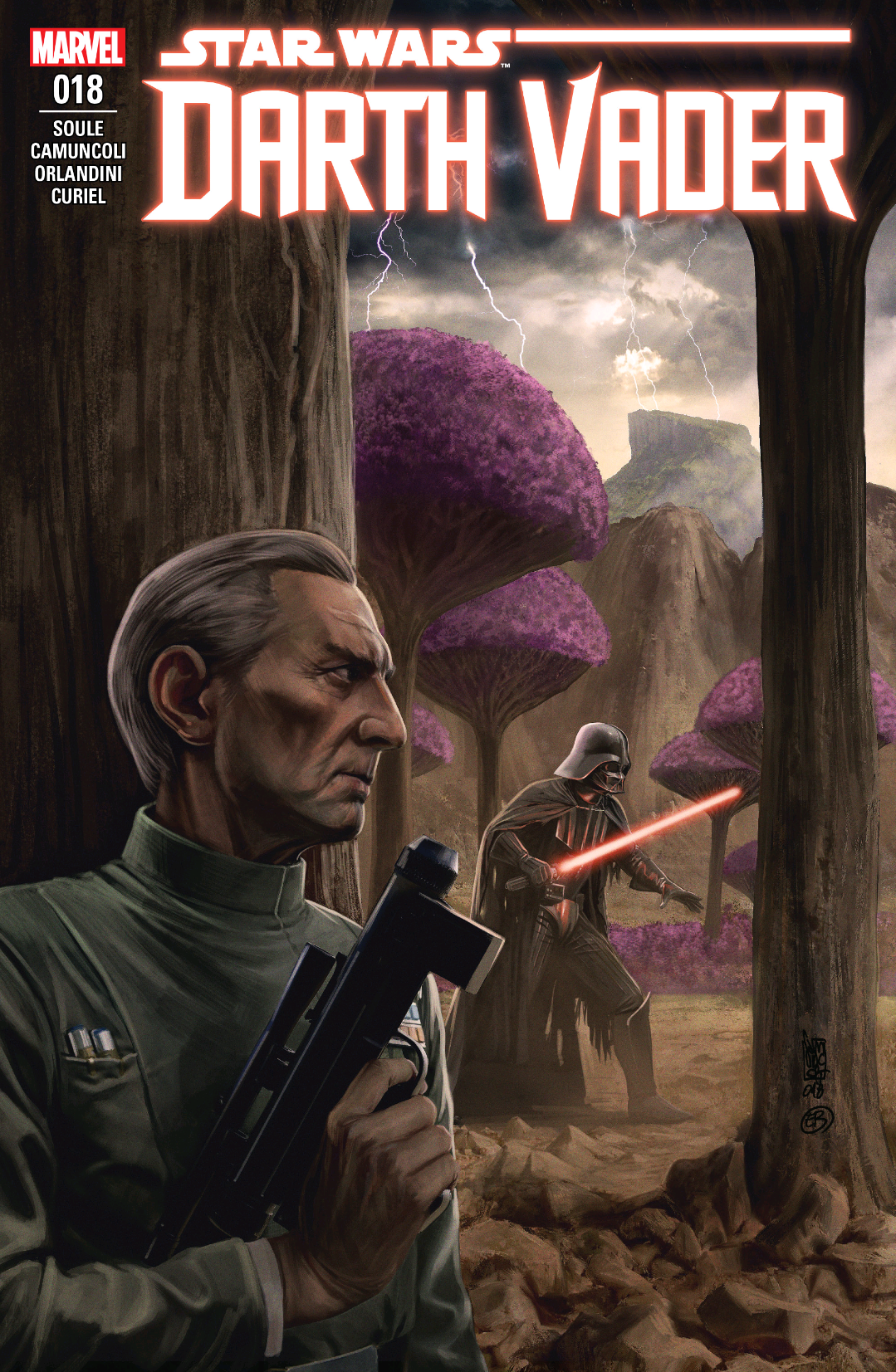 Tarkin and a band of hired guns are on the hunt for Darth Vader on a backwater world in the Outer Rim. The battle-hardened Governor is gunning for the Sith Lord in issue #18 of Darth Vader from Charles Soule and Giuseppe Camuncoli, and he’s shooting to kill. But what the heck is going on here? Didn’t the two at least have a modicum of respect for one another? Are they being tested by the Emperor to see who’ll come out on top? How many of Tarkin’s men will Vader slay before the end? Will Tarkin survive the hunt? Well, of course he will – but this one is about the ride – and what a thrilling ride it is. Spoilers ahead… 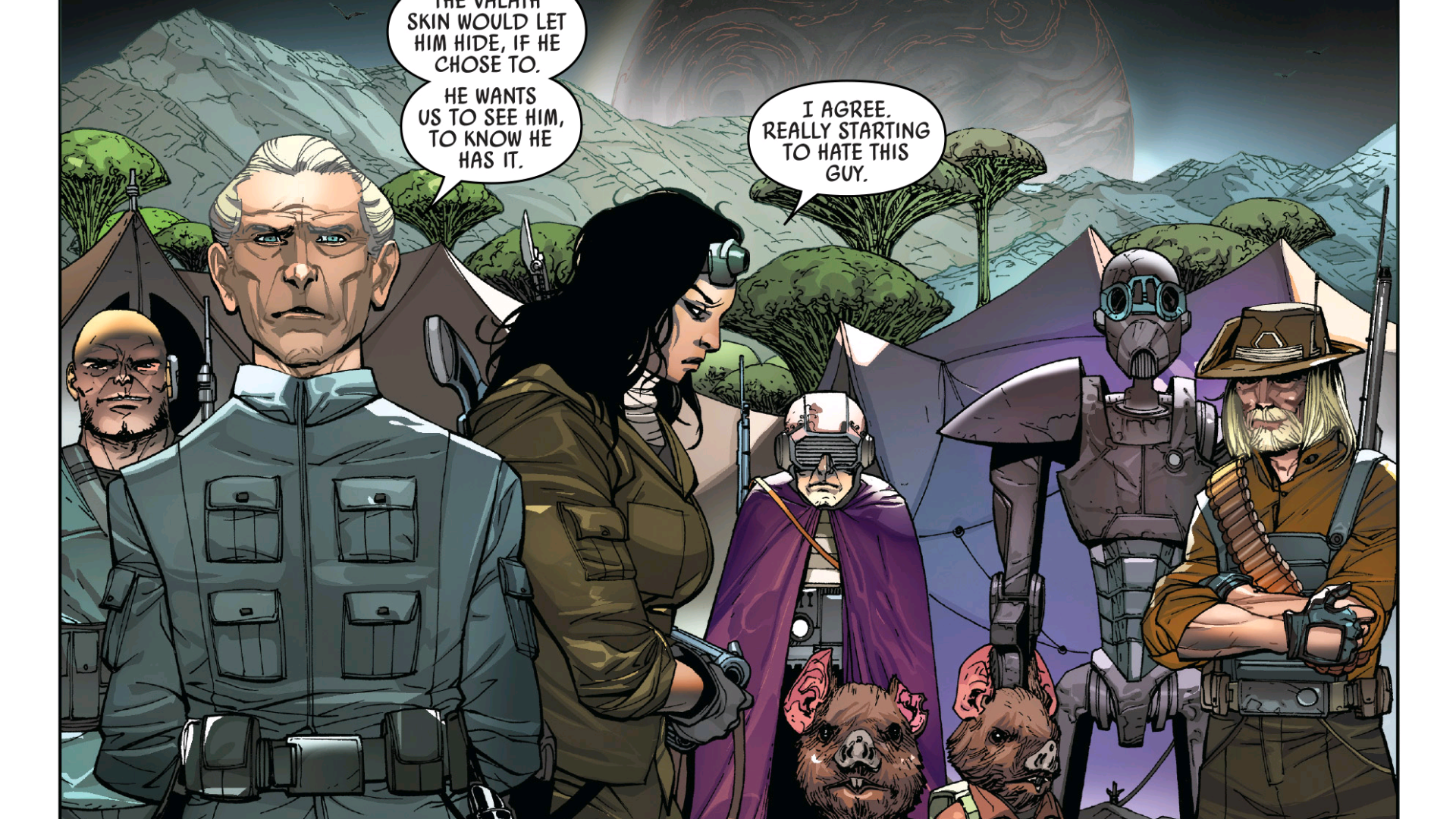 Make no mistake, Darth Vader and Tarkin, although rivals, are far from enemies. You see their mutual respect for the other so clearly in A New Hope, and already in this series they have had a good working relationship. In fact, their admiration for each other dates all the way back to the Clone Wars, when Vader (under his former identity as Jedi Knight Anakin Skywalker) rescued Tarkin from the Citadel, a virtually impregnable Separatist prison. In the canon novel Tarkin (James Luceno), Tarkin hunted down a group of pirates who stole his ship, the Carrion Spike, with Vader’s aid through the dark Lord’s connection to the Force. 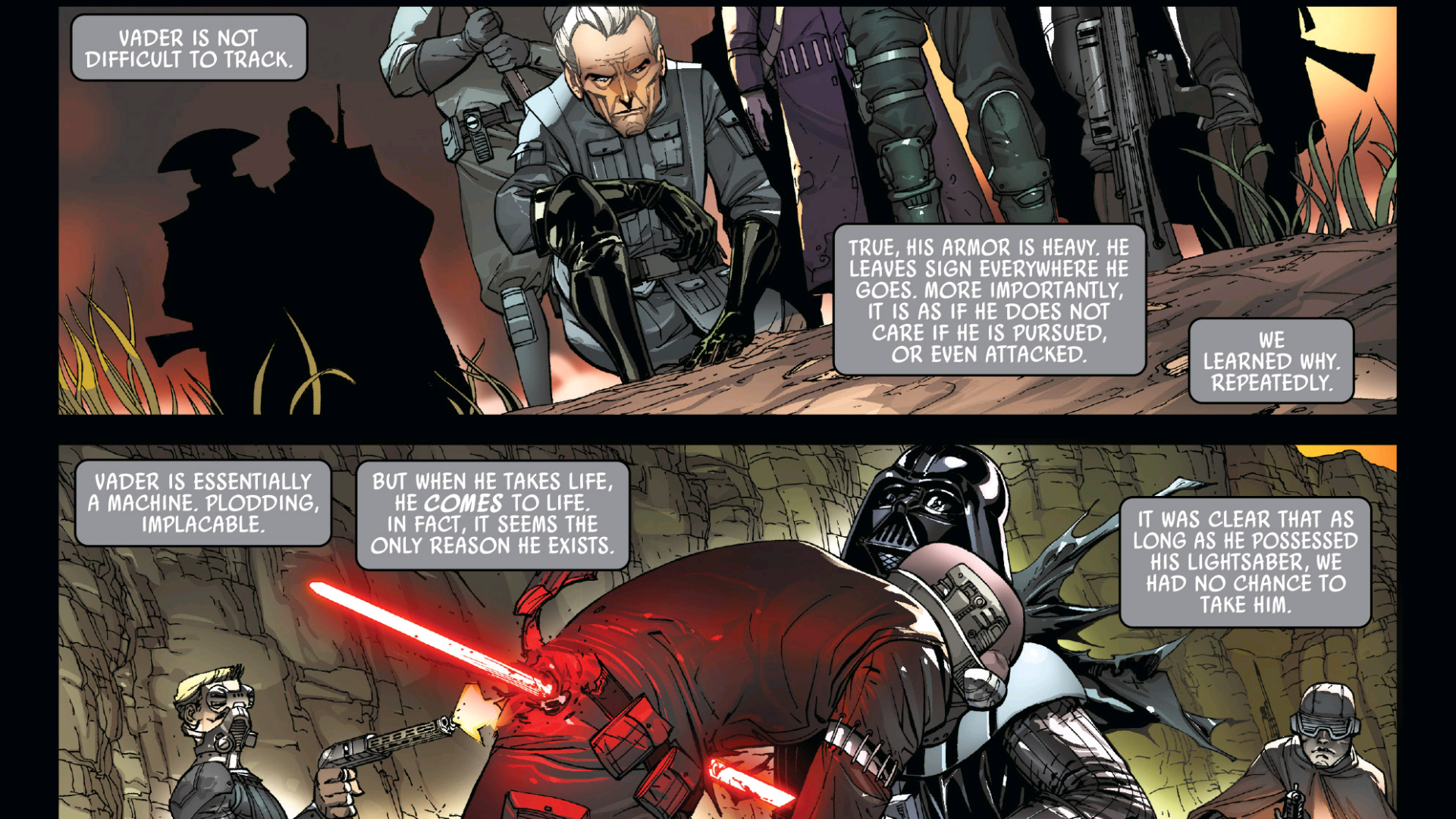 Their former mission was successful, as was their campaign on Mon Cala, depicted in the most recently concluded story arc of the series. So why are Tarkin and Vader trying to kill one another? The answer is simple. Tarkin owes Vader a debt for securing his vessel. And Vader has come to collect that debt…in blood. 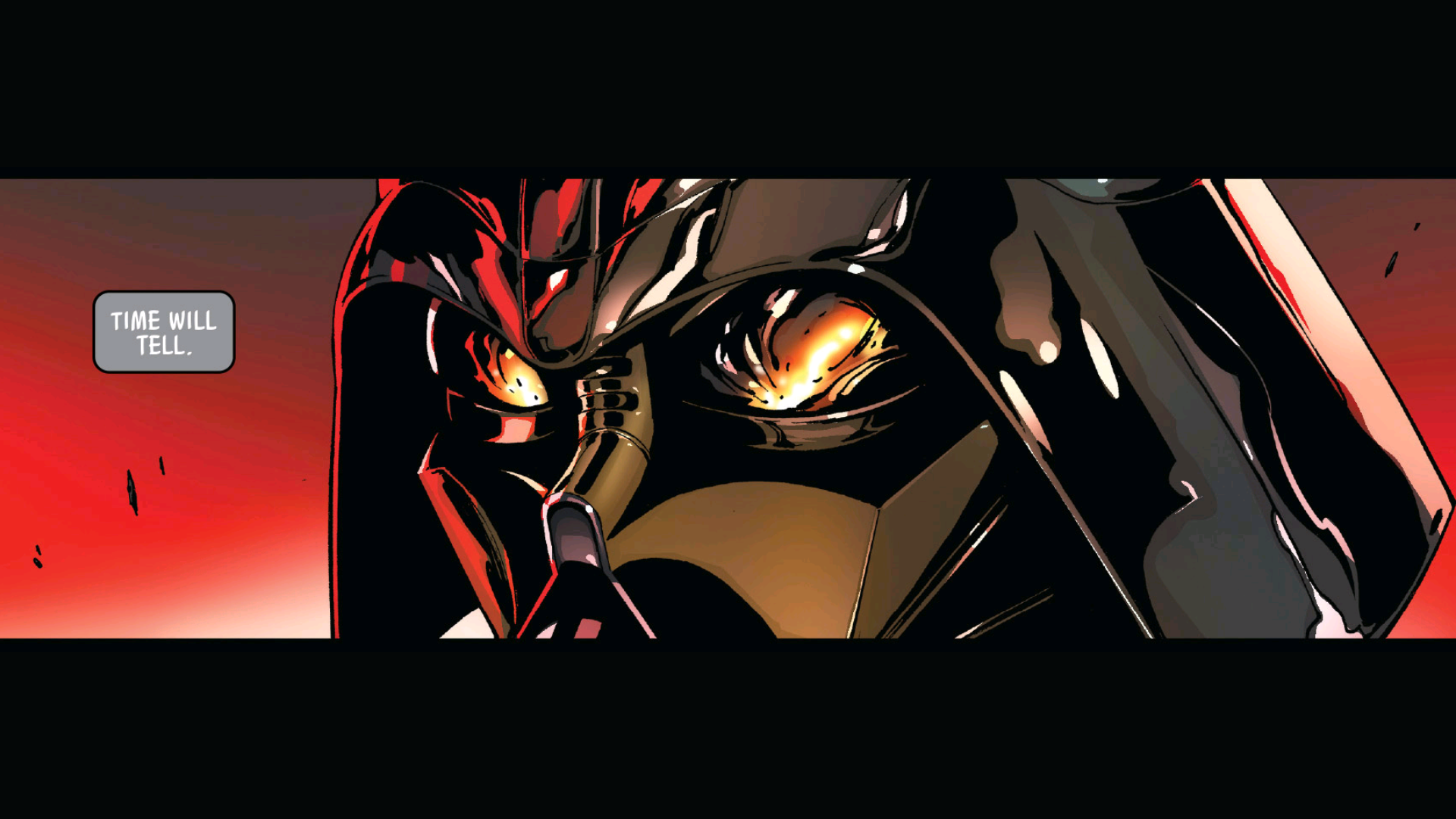 The Sith Lord is now familiar with Tarkin’s childhood background as a hunter and survivalist on Eriadu. He knows that Tarkin would be a formidable opponent, and so he calls on the Governor to give him a run for his Imperial credits. Vader is no doubt still shaken by his humiliating defeat at the hands of his old master, Obi-Wan Kenobi. Despite his recent successes at hunting down and exterminating the remaining Jedi with his Inquisitorius, the Sith apprentice feels like he has something to prove, and Tarkin has what it takes to test his mettle. 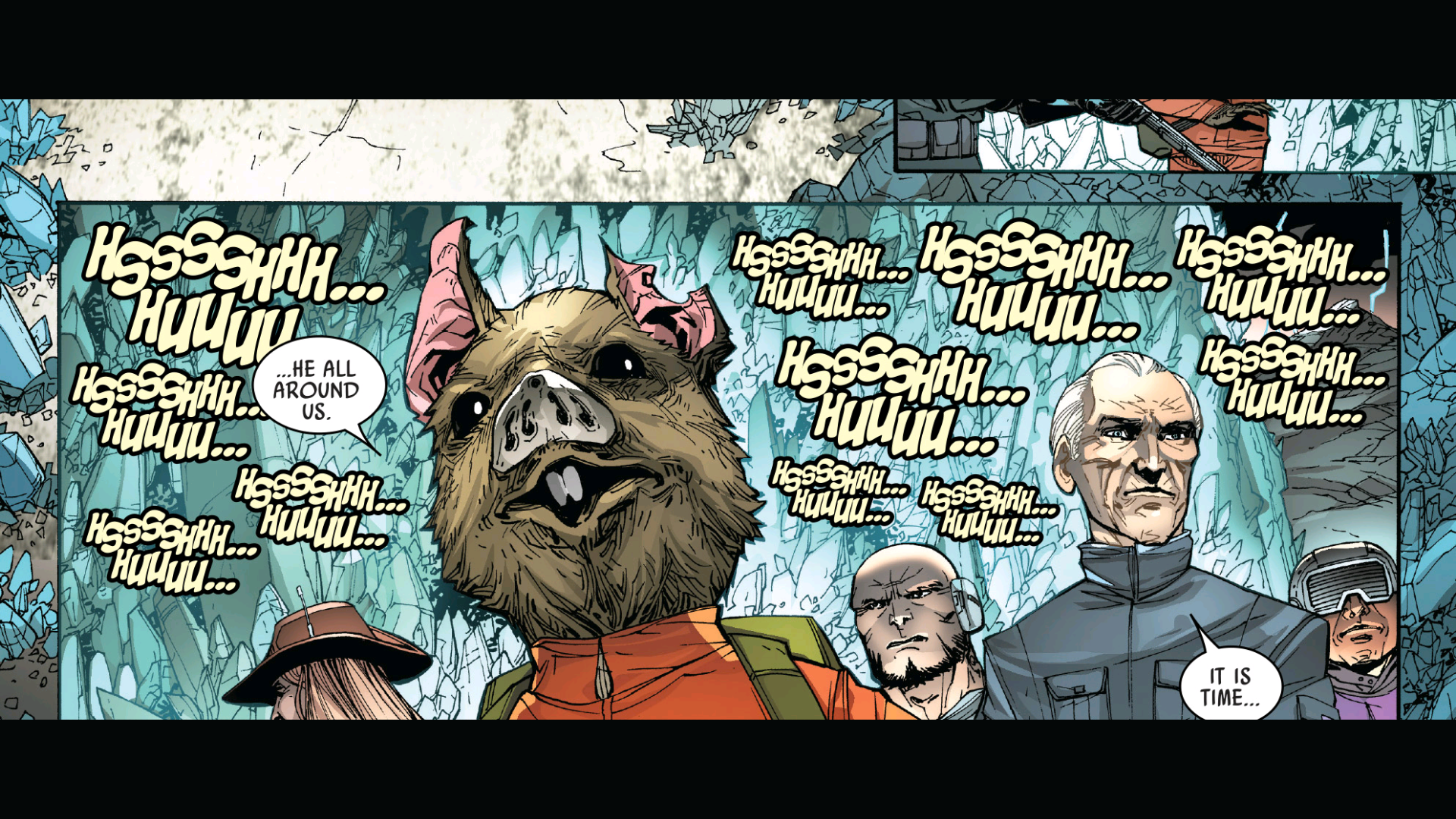 The issue itself is told from Tarkin’s point of view, as he seeks out the Sith lord and throws everything he can at him, occasionally sacrificing his mercenaries just to learn what he can about Vader’s tactics and motivation. The dark demon, as he is so lovingly called by the mercs, quickly proves his resourcefulness, much to the fascination of Tarkin and myself as a reader. Witnessing Vader taking advantage of the environment around him and manipulating Tarkin’s men was a true joy to behold. 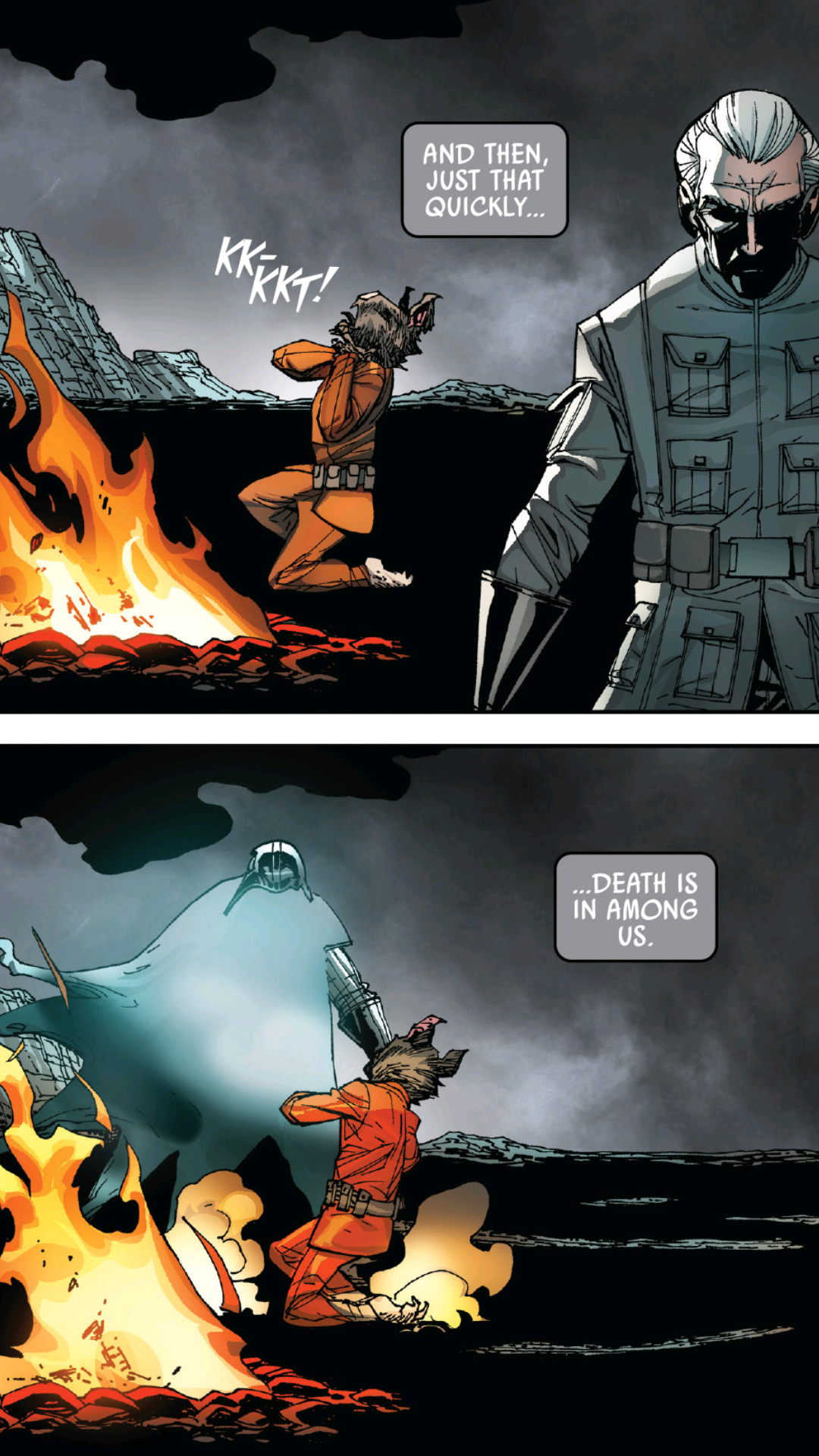 From camouflaging himself by harnessing the traits of the indigenous wildlife to using the sound of his own breathing apparatus to his advantage (something that should by all rights have been a weakness) was truly epic, and the vicious brutality on display when he takes the lives of the unfortunate hired hands was classic Vader, yet Soule still manages to give readers a fresh new light under which to examine one of the greatest villains of all time. Vader comes alive when he takes the lives of those around him, feeding his rage through up close and personal violence – something that Tarkin quickly takes note of. 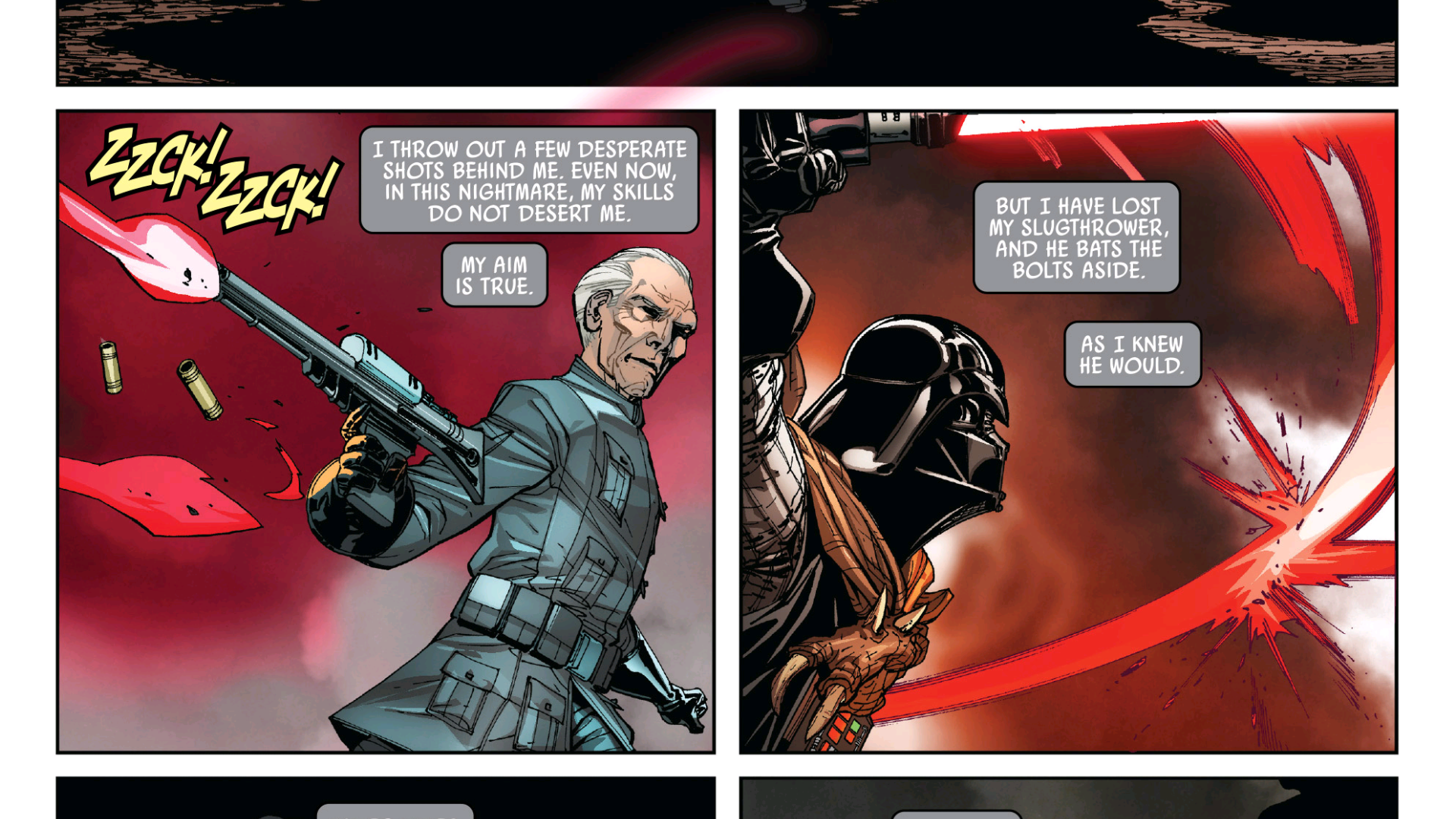 This whole issue plays out as an intense game of cat and mouse between two brilliant tacticians, but what makes this issue so satisfying and interesting is that the reader is never sure which one is which. It doesn’t take long to figure out that this is not a mere game of cat and mouse – it is a contest between two lions attempting to take over the pride. Reading this issue made me tremendously excited for the upcoming Thrawn sequel by author Timothy Zahn, where Vader will cross paths with another brilliant tactician in the Chiss Grand Admiral – but that’s a story for another time – let’s stick to the comic for now. 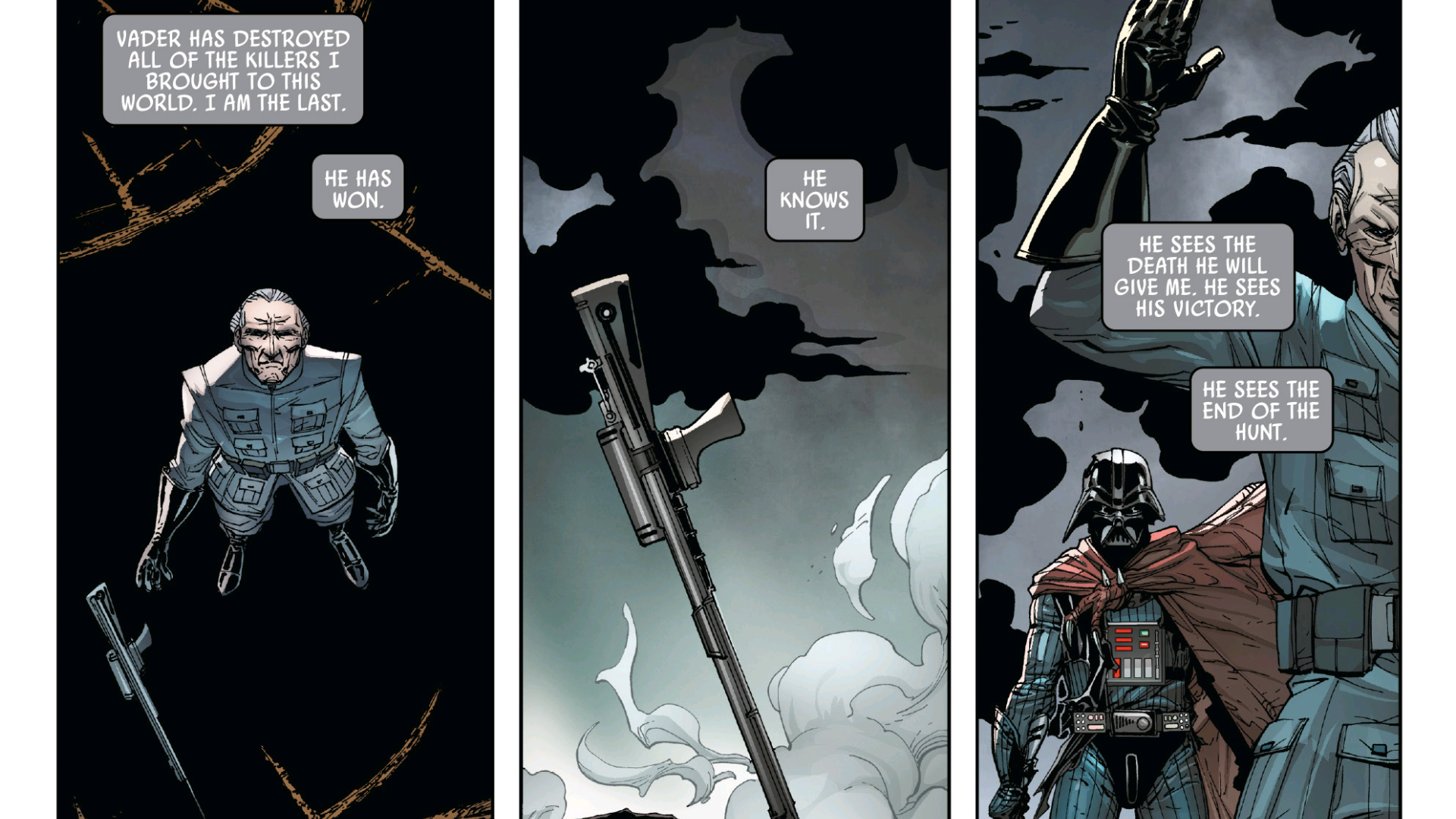 Everything about this issue is perfect. It has the advantage of being a standalone issue that isn’t part of a larger story arc, yet it so masterfully ties in with other canon material while giving us another fascinating look at the Tarkin/Vader dynamic. Just when it seems Tarkin finally has Vader on that leash that a certain Alderaanian princess will one day refer to, Vader lets him know that tether can easily be broken (and even used to strangle the one holding it) on a whim. 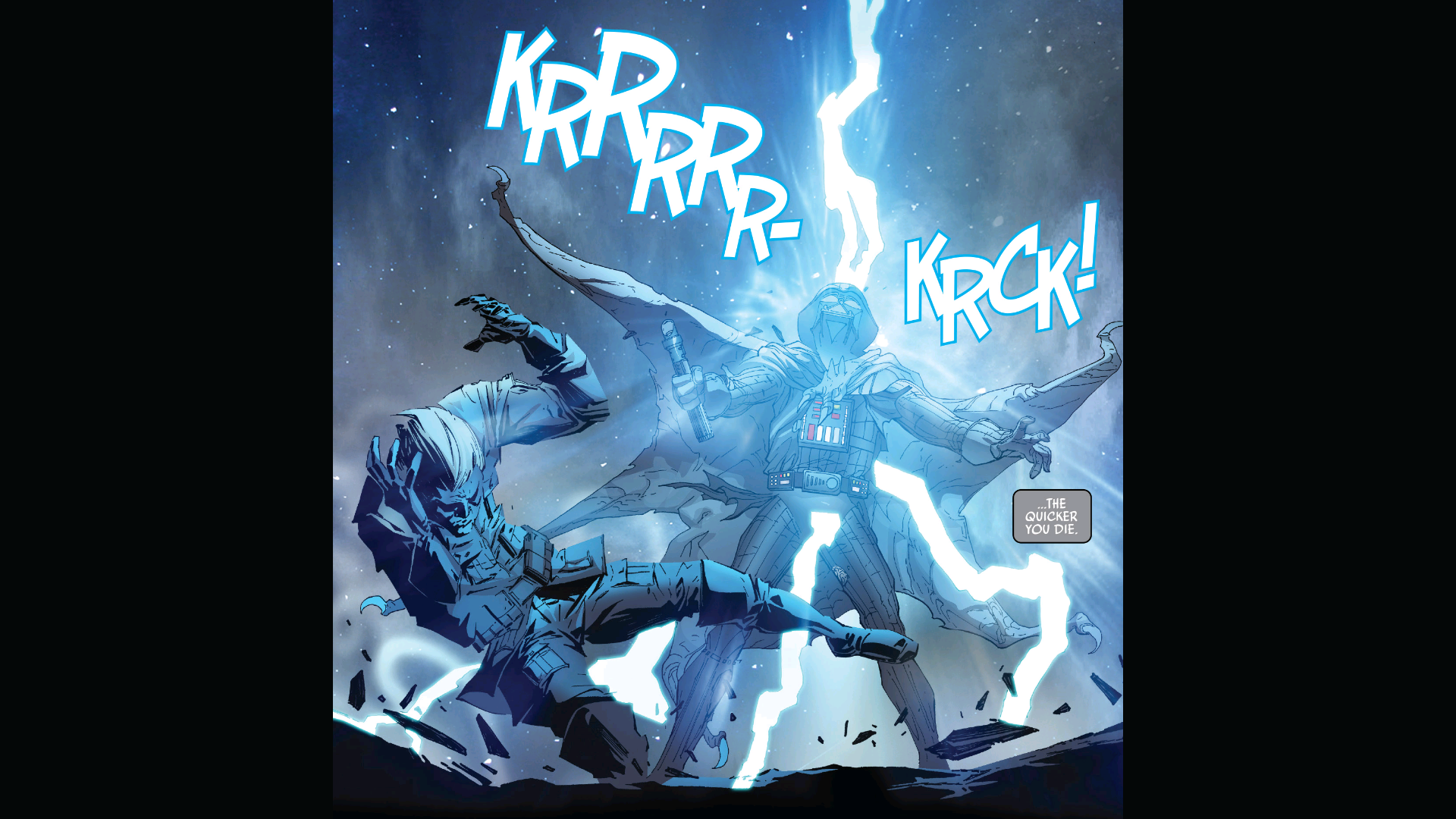 Soule continues to prove that he is now the authority in Darth Vader-centric comics. I loved Kieron Gillen’s work with the character in his 25-issue run, but Soule has done far more in his 18 issues than I would have thought possible, and Camuncoli’s beautifully expressive artwork is perfect for Soule’s storytelling. This series is consistently the best Star Wars series in print right now, and this particular issue is a must read. It’s not necessarily essential for continuity purposes or anything of that sort. You can still enjoy Star Wars without it. But do yourself a favor and pick this one up if you can. You’ll be glad you did. 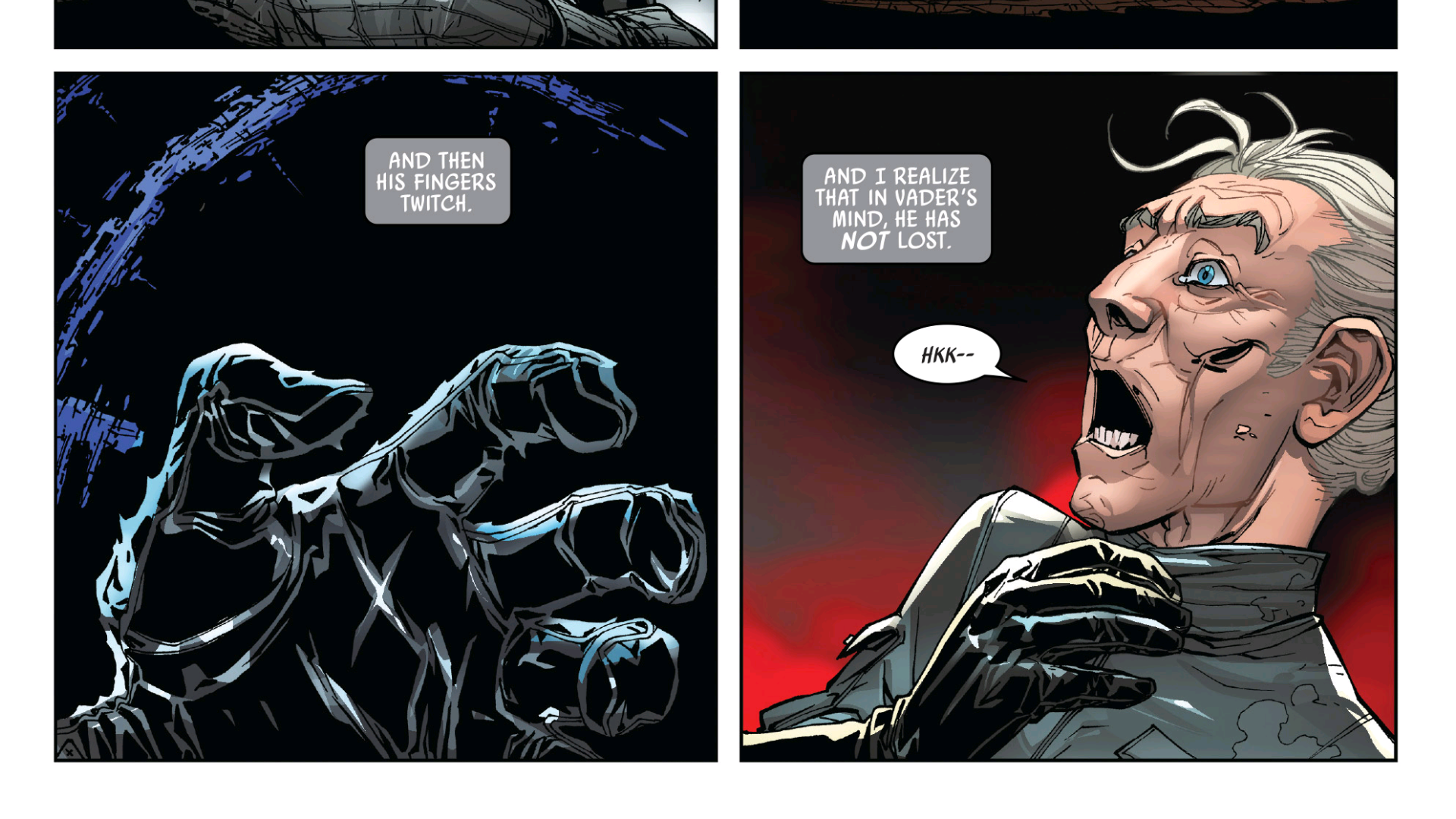 Darth Vader #18 is available now in a comic shop near you or online at Comixology. Happy reading comic fans! 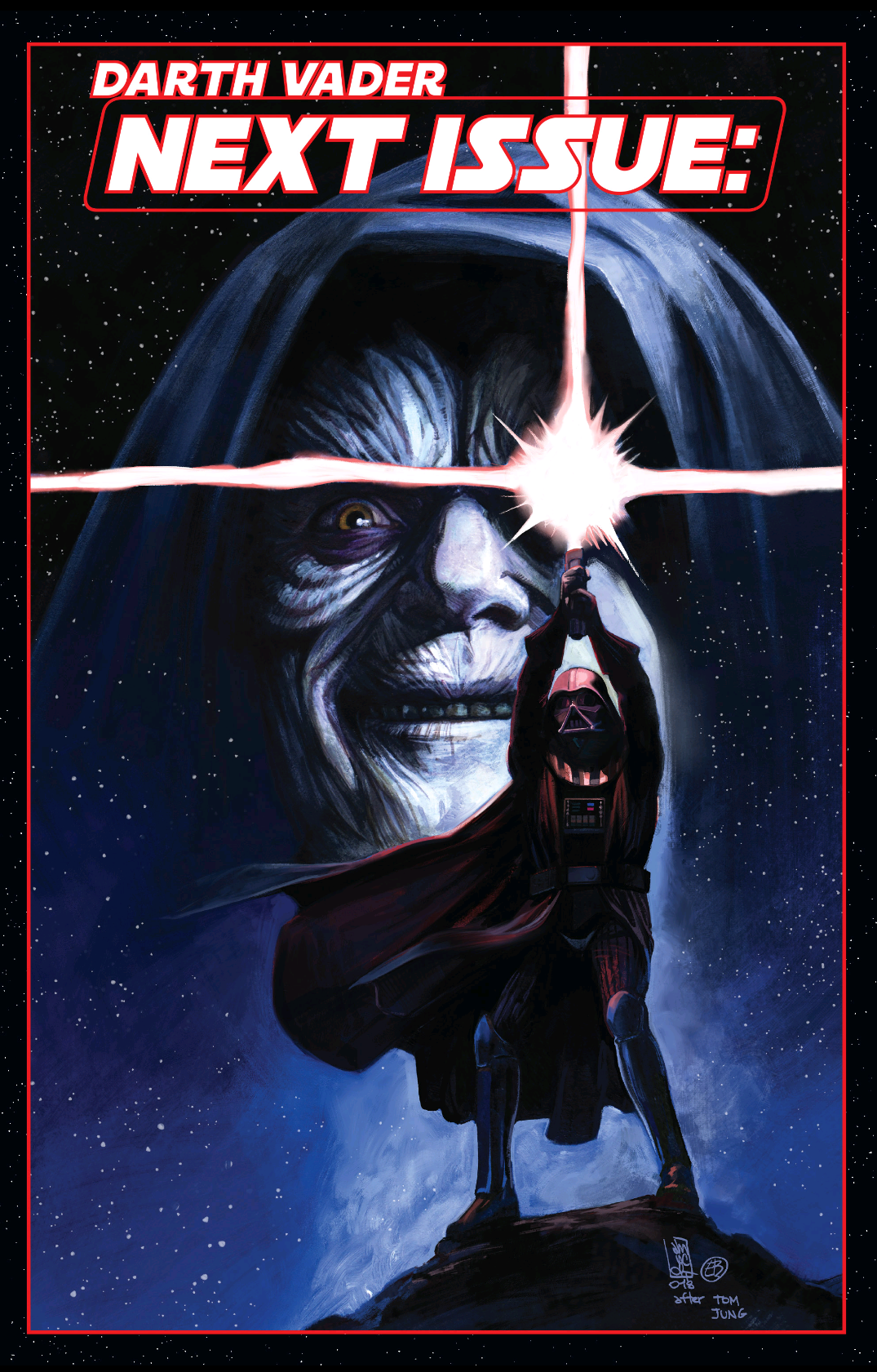