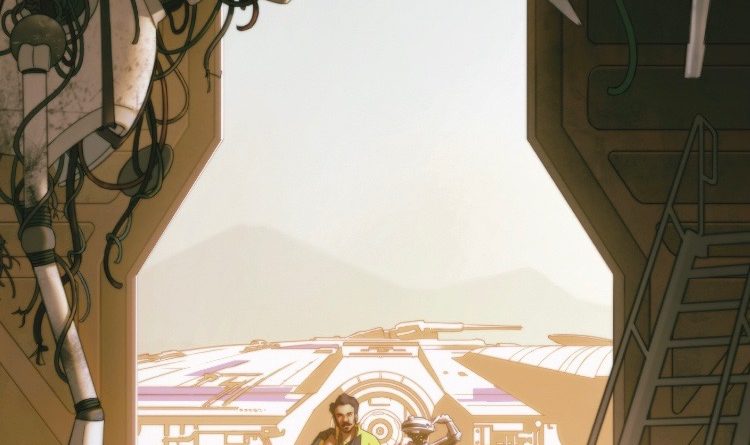 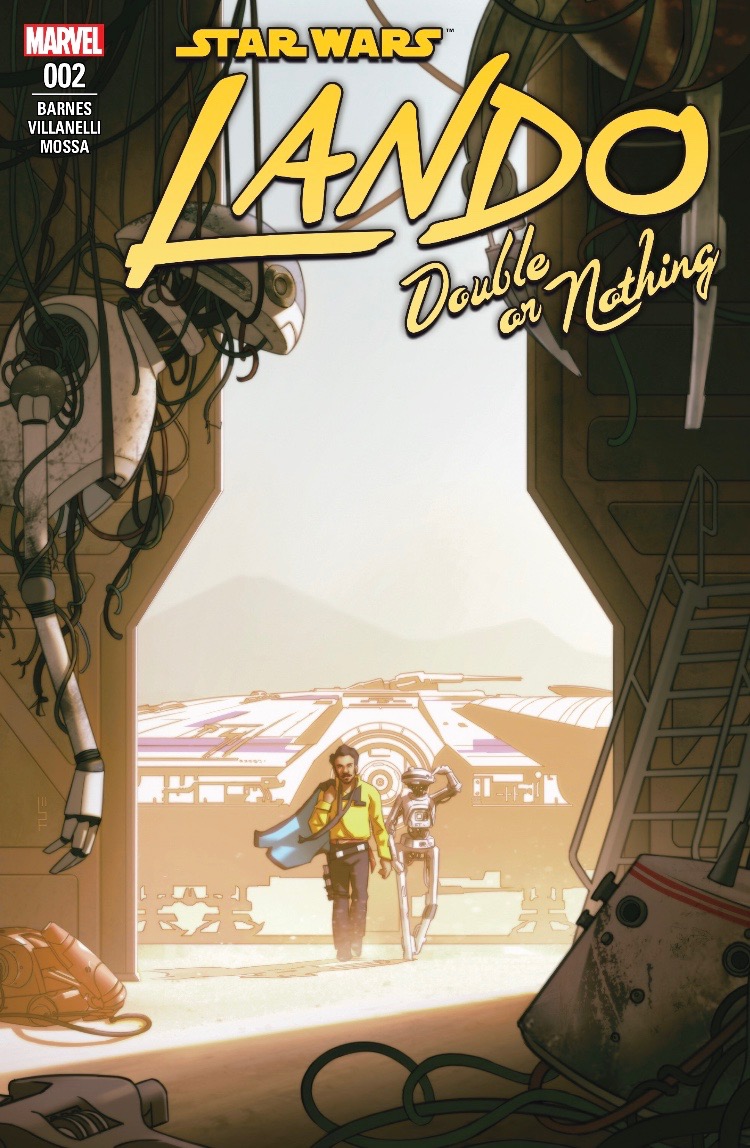 Between dictating his autobiography and plotting his next Sabacc game – Lando has found time to do some work as a pilot for hire. Along with Elthree, he’s been lead to a backwater planet called Kullgroon to help a soldier free her people from Imperial enslavement. What could go wrong? SPOILERS AHEAD…. 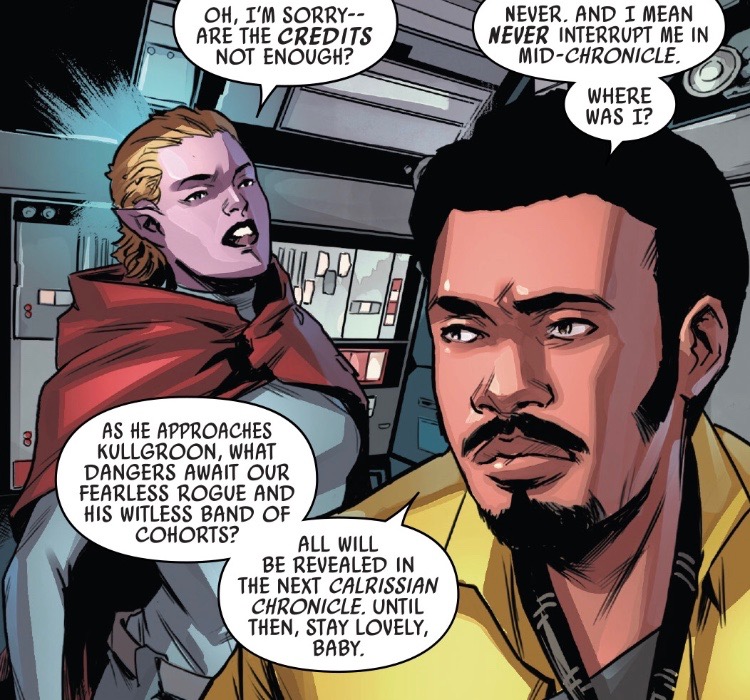 Oh, that’s right, I forgot Lando isn’t referring to his autobiography by that literary term…it’s chronicles.  The Calrissian Chronicles. Cue eye-roll. Elthree pointed out in the first issue Lando might not be the most reliable narrator when it comes to his own stories, but that could probably be said of all of us, to some degree. We rejoin Lando, Elthree, and their new acquaintance, Kristiss, as the Millennium Falcon approaches Kullgroon. Kristiss isn’t terribly impressed with Lando’s chronicles and seems dubious when it comes to his piloting. They’ve arrived at Kullgroon, but Lando and Elthree are going to have to pilot gingerly to avoid Imperial detection. 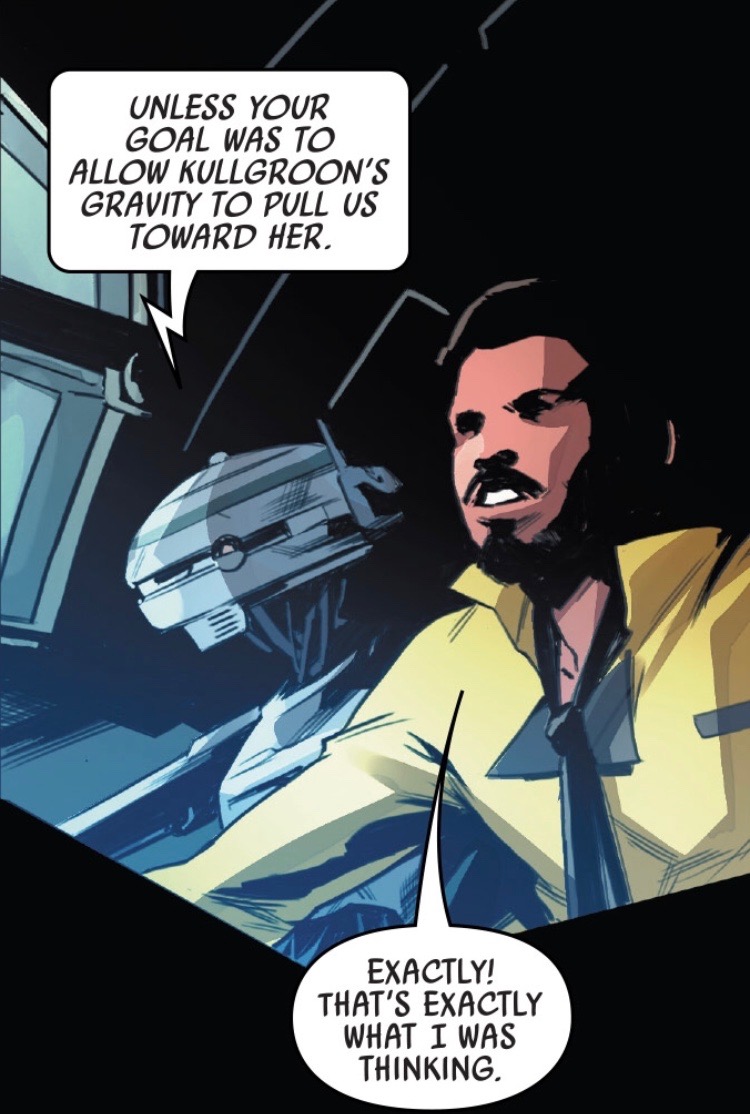 Lando is going to let gravity do the work, which seems pretty smooth to me. Turn off the engines and just cruise on in. It’s a bumpy ride in, to say the least. Elthree and Kristiss heckle Lando, and he criticizes their “lack of chill”, which may be my favorite line from a Star Wars comic book to this date. Sometimes I hate it when modern-day vernacular ends up in a galaxy far, far away, so that goes to show Lando can pull of just about anything. 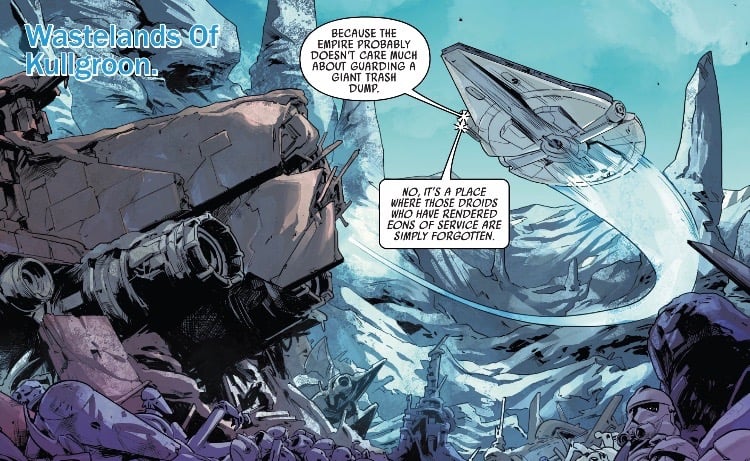 Amongst the junkyard planet, the three would-be rescuers need to come up with a plan to free the the Petrusians (Kristiss’ people). Because Kullgroon is a premiere droid processing facility, Elthree figures she can blend right in with the other droids the Empire has reclaimed. Lando and Kristiss plan to try and sneak in, but they have to park the Falcon far from where the Petrusians are being held and brave a seemingly inhospitable surface to get there undetected. Kullgroon reminds me a lot of Carnelion IV, which we saw in Marvel’s Obi-Wan and Anakin series. Usually the planets we see are presented with so much grandeur, it’s nice to get a glimpse of the trashed planets the Empire dumped their wreckage on. There’s some great art to take in from artists Paolo Villanelli and Andres Mossa. Really cool frames of the Millennium Falcon, pre-Solo Kessel Run.

Lando and Kristiss go from back-and-forth banter to arguing, so Elthree takes over. She suggests the two of them spit up while she goes into the droid facility. Once they separate, Lando rants to Elthree via a wrist comm about how this job may be more trouble than it’s worth. He’s interested in getting weapons and credits to pay off the debt we learned of in the first issue. There’s not a lot of moral dilemma here for Lando Calrissian, which isn’t too far from the person we met in Solo. He actually proposes to Elthree that they leave and continue their lives of dodging his debt collectors. The droid reminds Lando that’s not how it should be done and he continues trying to figure out his next move. When he goes to make contact with Kristiss, he can’t raise her on his wrist comm.

Uh oh…looks like Kristiss is going to be getting a reunion with her people. Part of me thought Kristiss intended to get captured and that she would be her own Trojan horse. That’s not so and Elthree has to talk Lando out of leaving once again, since he really feels like this job is not worth the effort after losing Kristiss. Elthree starts to download Imperial security codes, from what imagine to be the Holo Net’s version of the dark web. Lando seems to shrug his shoulders moment when he figures that now he’s going to have to get Kristiss out in addition to saving her people. Elthree seems to think that would be good character building. 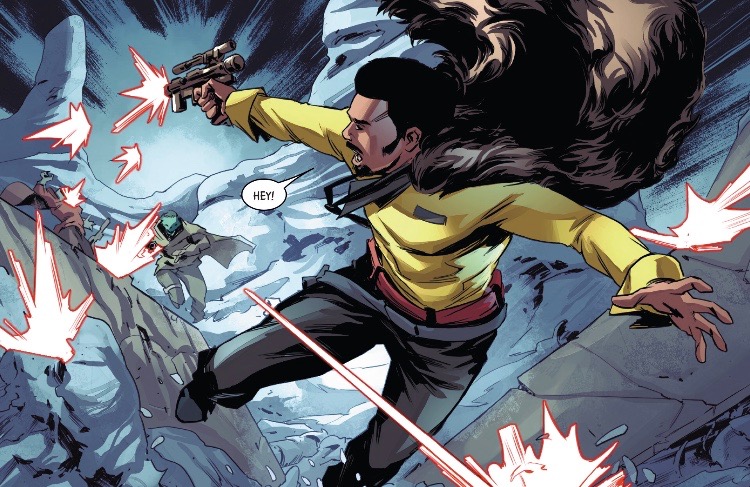 Well, it wouldn’t be a desolate, wreckage filled planet without some bandits showing up. Just as Lando’s muttering the next entry of his chronicles, these bandits appear and star blasting at him. As Lando continues to recount the story of the cape he’s wearing, he takes out the small group attacking him, only to see that they have air support from above. In a pretty swift and smooth move, Lando dashes to a ship that looks marginally operational, only to get it up and running and give the bandits in flight a moving target.

There’s some great aerial frames of Lando doing the best he can with a small fleet at his back. Even one of the galaxy’s best pilots can’t do much with the barely functional ship and he’s shot down.

Elthree makes contact with Kristiss, who is being held in a detention center and about to be moved by some Stormtroopers. Just as this happens, Elthree realizes what kind of droid processing center this is and is about to cause some trouble. Lando survived the crash but has awoken in a part of the planet called the Wastelands. 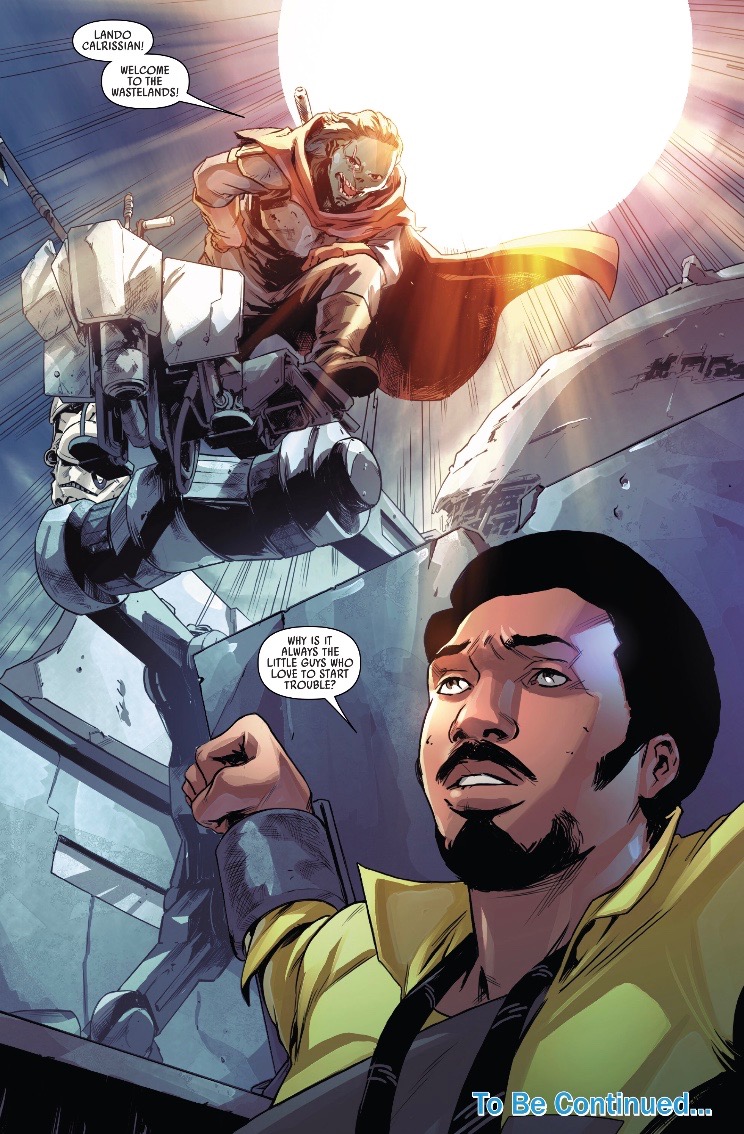 Should be interesting to see where this goes.

Not a mind-blowing issue, but not each one has to be. I’m really enjoying Rodney Barnes’ writing and love getting to know Lando more at this point in his life. Elthree was a character I thought disappeared from Solo far too quick (I’m also still not over Val), so I’m enjoying every bit of her presence in this series. This issue served its purpose to set up the next one and managed to be pretty entertaining overall. The art is good and the story moves along nicely. Lando: Double or Nothing is shaping up to be another great Star Wars comic series, so you should get in on it now. I’ll be picking up the next issue for sure to see how Lando and company get out of this mess. 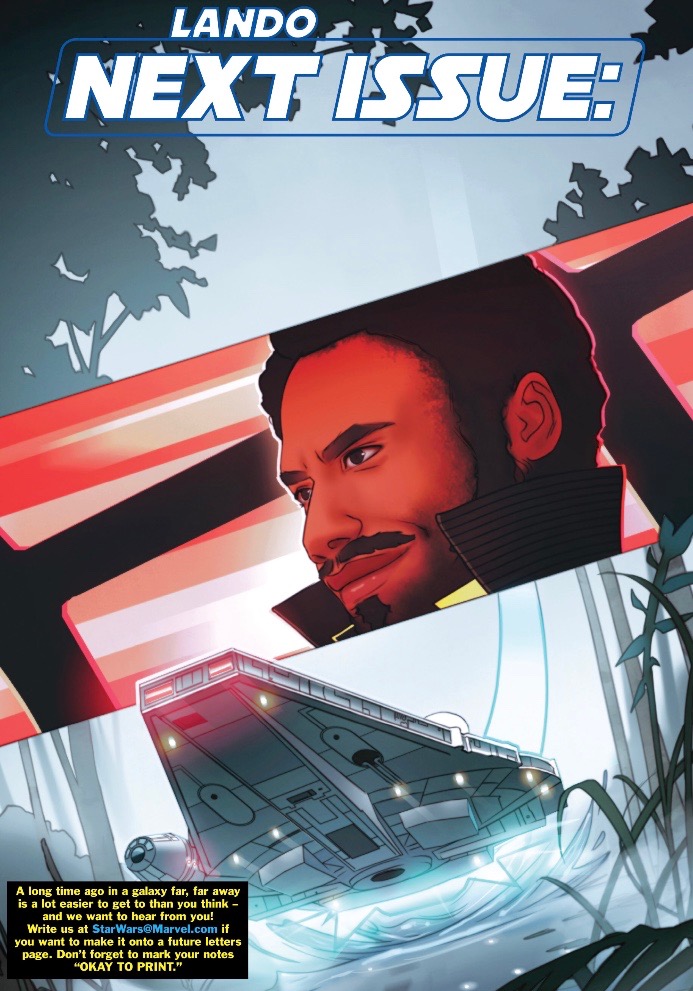 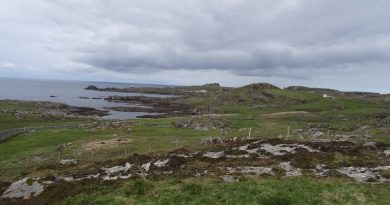 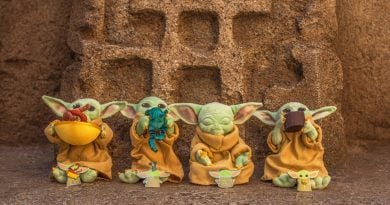 New ‘The Mandalorian’ The Child Plush and Pin Collection Coming to shopDisney.com