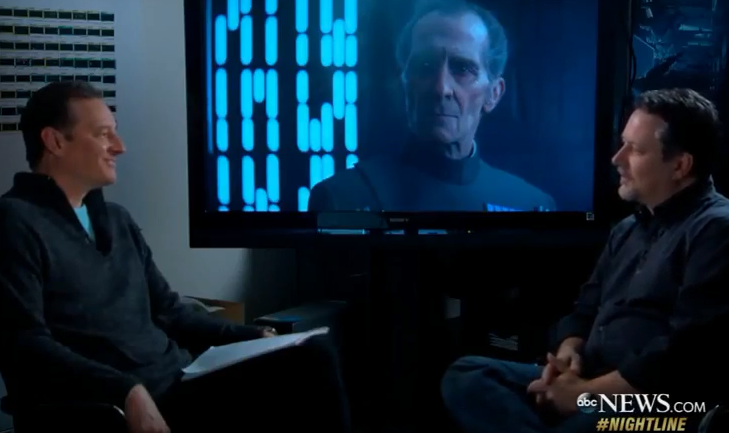 ABC’s late-night television news program called ‘Nightline’ goes behind the scenes at Lucasfilm to bring you exclusive details on the groundbreaking technology used to resurrect a deceased actor for ‘Rogue One: A Star Wars Story‘. Check it out!

Rogue One: A Star Wars Story has already raked in over $823 million at the worldwide box office, and it’s going to push towards the 1 billion mark as we head into mid January. The film is flat out great Star Wars and does an excellent job at binding the first two trilogies together as well as being unique on its own. Despite positive critical reaction, the film features a controversial resurrection of the late actor Peter Cushing as Imperial officer Grand Moff Tarkin, thanks in part to the magic of motion-capture performance and ILM.

Nightline on ABC (via Trailers and Clips) just posted “Clayton Sandell’s, Nightline” exclusive behind-the-scenes video which aired last night on their late night television program. The new clip features the backstory of how Lucasfilm recreated and resurrected the infamous Grand Moff for the new ‘Rogue One’ spin-off film. You’ve got to see it to believe it…

Shout out to our “The Cantina” member JEFF for the heads-up!