The new Star Wars Galactic Atlas has already been released in Europe. For some reason, this book will not be released in the United States until after Rogue One hits theaters, so we decided to share this for our readers in the US. There are no ground-breaking revelations from the Atlas, but it does have 2  really cool pages dedicated to Jedha, revealing several new bits of information about the small desert moon.

Before we dive into the new bits, here’s what we know about Jedha according to Wookieepedia:

Jedha was a small desert moon located in the Jedha system of the galaxy’s Inner Rim, which had a cold climate due to its lasting winter, and an atmosphere that was breathable to its human population. The ancient world of Jedha was home to one of the first civilizations to explore the nature of the Force, was considered a spiritual home of the Jedi, and the Temple of the Whills was located on the moon. Some scholars made a case for Jedha as the location of the Jedi Order’s first temple, alongside other candidate worlds, such as Ahch-To, Coruscant, Ossus, and Tython. As a result, the moon became a holy land for those who followed the Force and a place that one would go on a pilgrimage.

Subsequent to the fall of the Jedi Order and the Galactic Republic, its successor state – the Galactic Empire – occupied Jedha for possession of the resources that once served the Jedi Order as lightsaber component material. Under the rule of the Empire, the timeworn streets of Jedha were patrolled by stormtroopers, Imperial Assault Hovertanks, and AT-STs. The Imperial oppression later led to the formation of a resistance, coordinated by the Rebel veteran Saw Gerrera who preferred brutal tactics. Some time before the Battle of Yavin, Rebel soldiers Cassian Andor and Jyn Erso undertook a mission to Jedha to secure a member of the resistance group. At some point, the first Death Star – the Empire’s deep-space mobile battle station capable of destroying entire planets fired its superlaser at the moon.

The two most interesting locations on Jedha are the Temple of the Whills and Saw Gerrera’s secret base. The Galactic Atlas gives a good look at these two.

Many of you have probably already figured that the Temple of the Whills is actually the huge building that we’ve seen located in one of the cities from the trailer (see the two images above). Actually, the Atlas reveals that the temple is located in the so called Holy City, which sits atop a natural mesa like many of the settlements on Jedha (click on the images for bigger version): 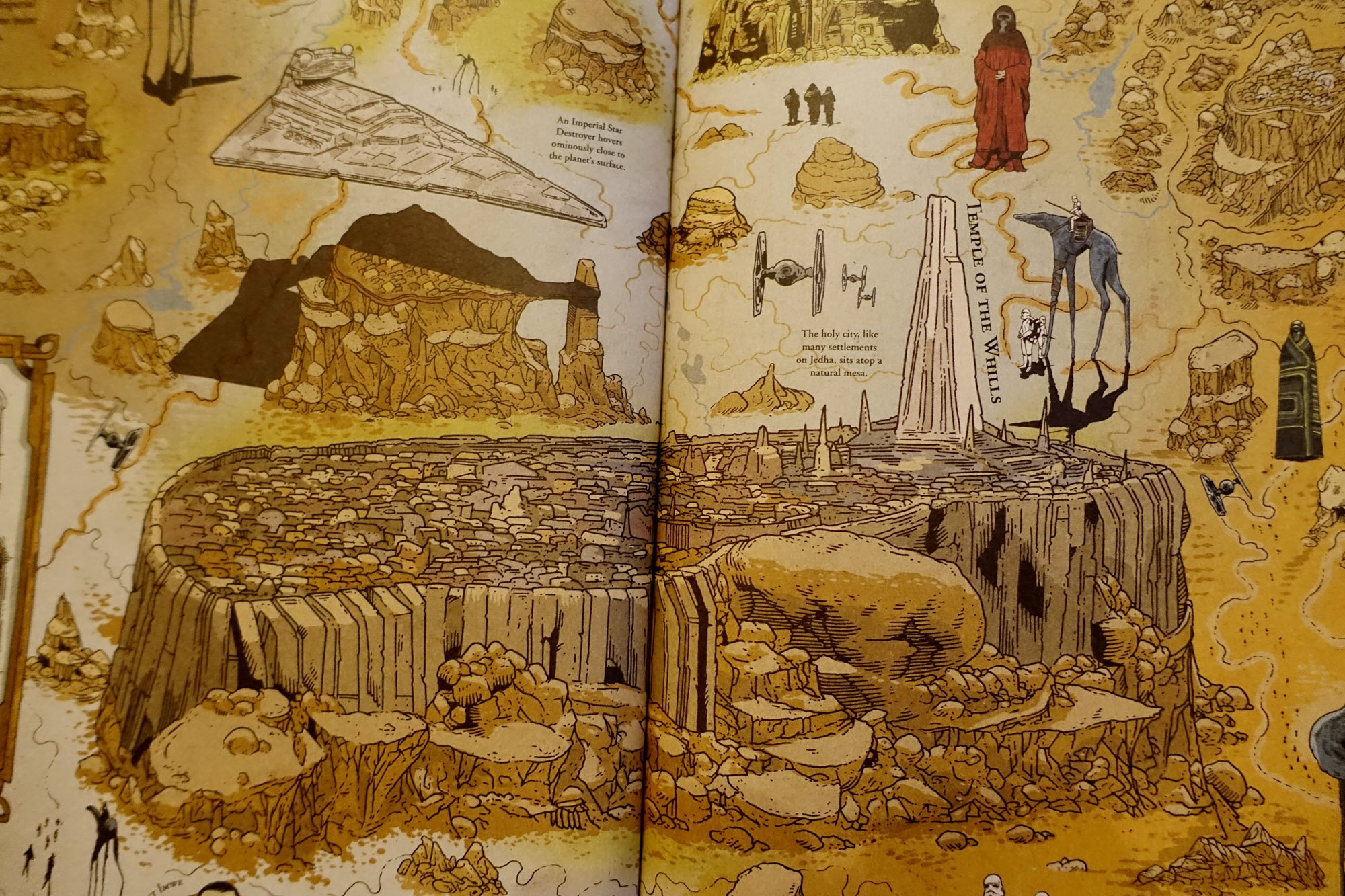 The other interesting info that the Atlas reveals is about Saw Gerrera’s secret base on Jedha:

Extremist rebel Saw Gerrera has spent his life fighting guerrilla warfare against first the Separatists and now the Empire. Mistrusted by the Rebel Alliance, he believes violence is the only way to achieve victory. His hidden base on Jedha was once used to store the skeletal remains of the death. 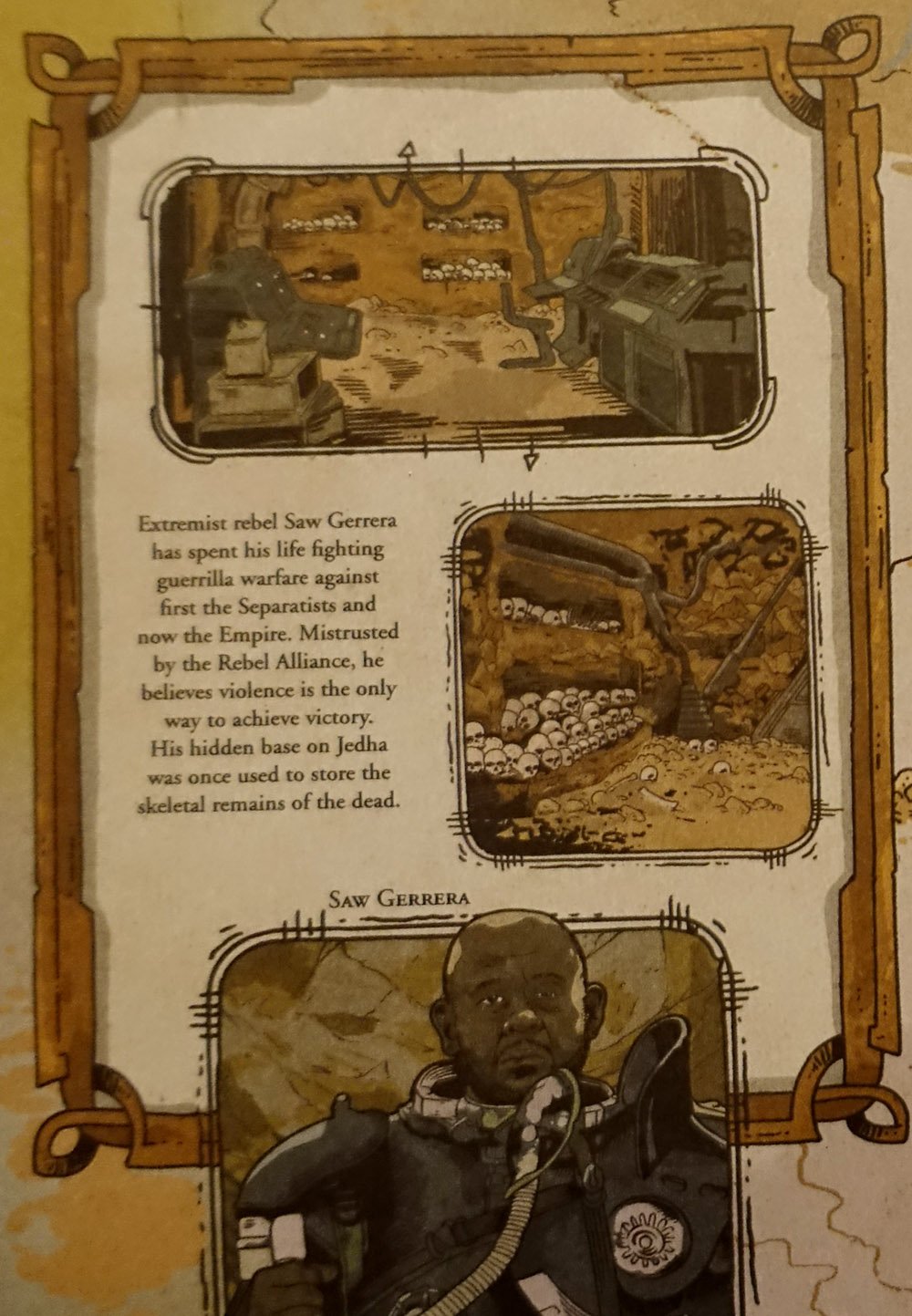 Also, the Atlas reveals that Saw’s hideout is hidden beneath the ancient ruin (pictured below): 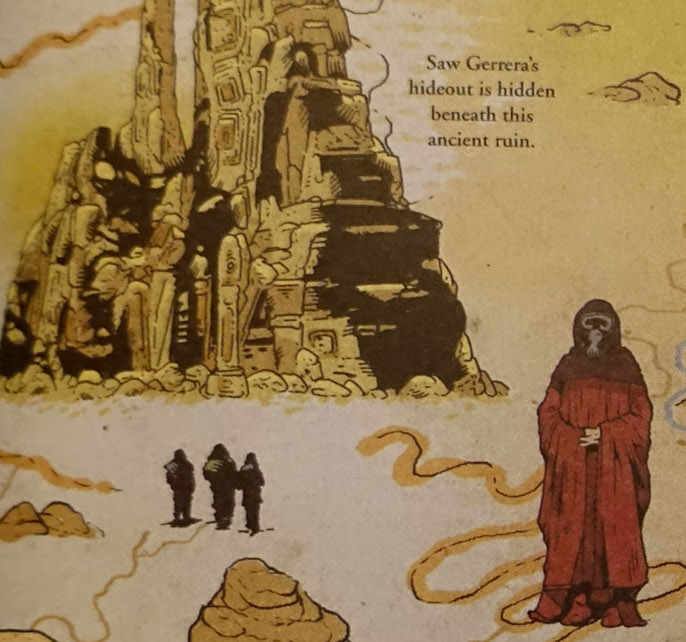 Saw definitely displays an interesting taste in home decor – keeping the dream alive by surrounding himself with the most despondent imagery imaginable. This is an interesting choice for a base location. I can’t wait to see the depiction of it on the big screen.

Another interesting bit is that the Atlas directly mentions Kyber crystals in its description about Jedha. Until now all sources were referring to the Kyber crystals as components or resources that the Jedi use in their lightsabers: 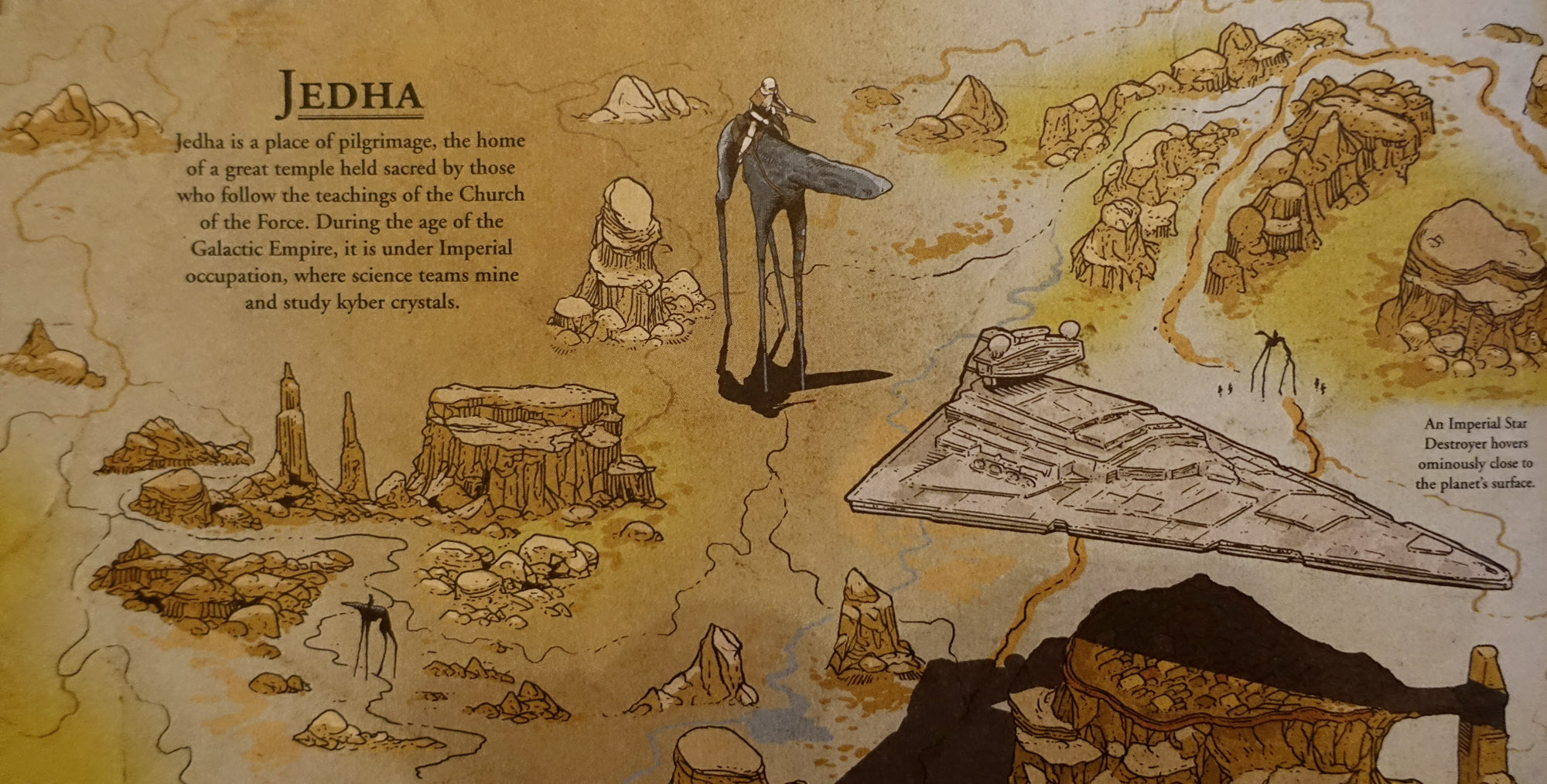 We also get a better look at some of the pilgrims on Jedha and the Stormtroopers patrolling the chilly sands atop the cool looking long-legged mounts.: 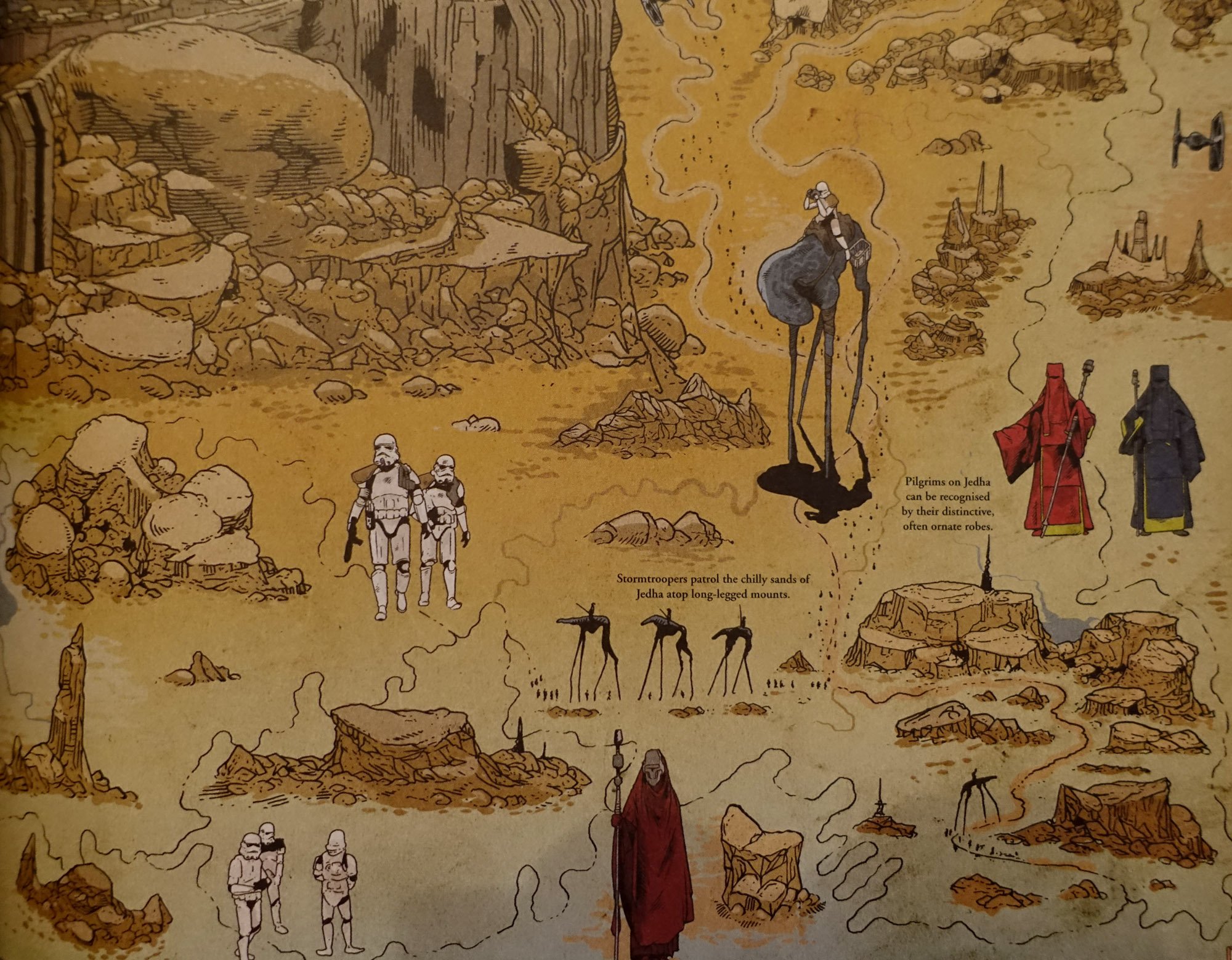 Finally, as we mentioned before the Atlas also gives a brief descriptions on Chirrut Imwe and Baze Malbus: 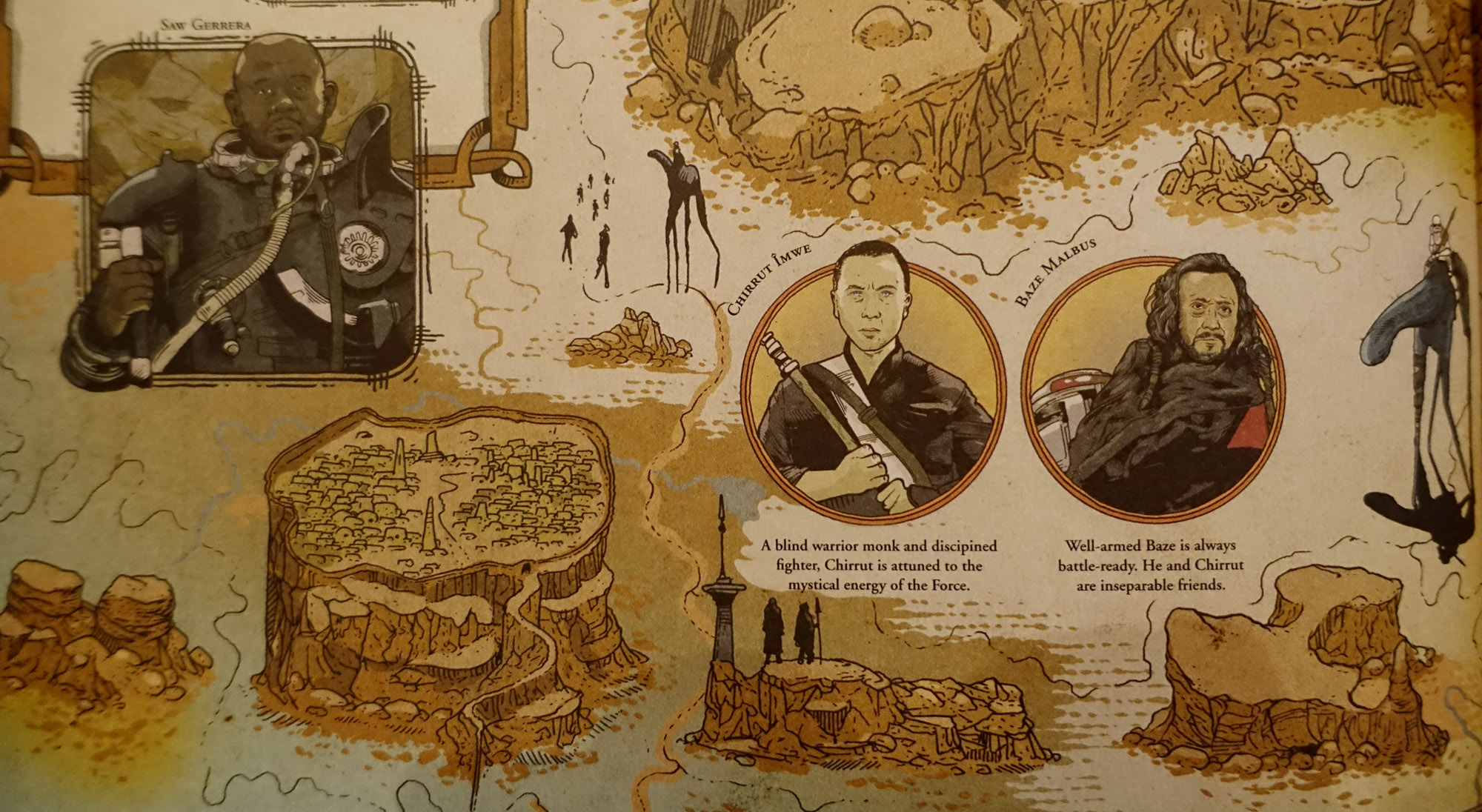 These are just two pages from this magnificent book (there is nothing else from Rogue One). As you can see the art is really fantastic and I would recommend it to any Star Wars fan. The book has multiple maps, star charts and battle scenes depicted in great ways. You can watch a trailer for this release here:

If you live in Europe, you can order a copy from Amazon UK. On Amazon USA the book will be available on December 20.