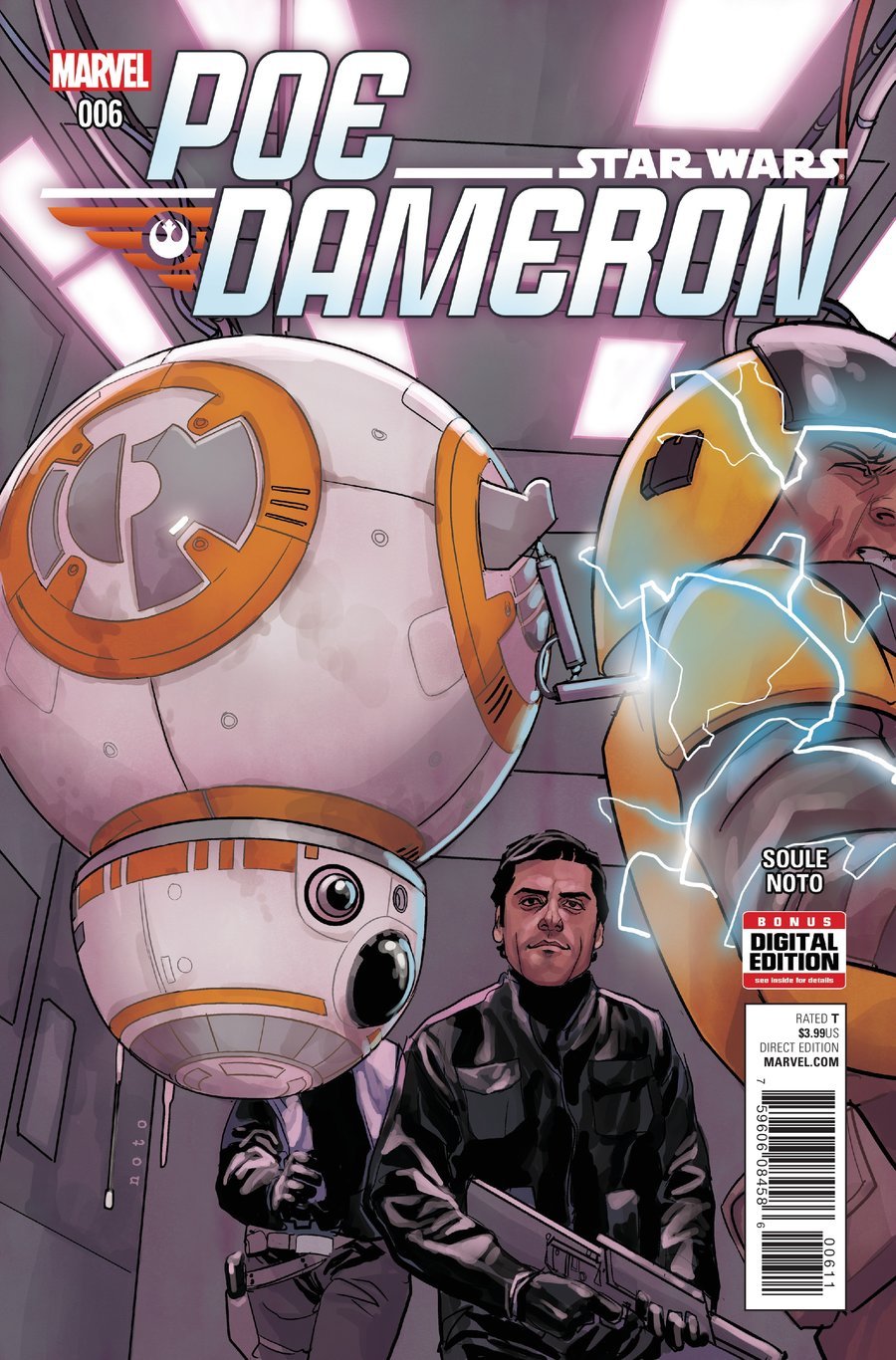 When we left Poe Dameron and the Black Squadron in issue #5, they were trapped in Megalox Beta prison fighting for their lives thanks to Terex’s deal with the crime bosses, rivals of Grakkus the Hutt. Unfortunately for Poe & Co., Grakkus is the only person that can provide them with the information necessary to find legendary explorer Lor san Tekka and, through him, Luke Skywalker.

As this issue opens, our heroes are still in precarious position. Grakkus refuses to open the doors for their escape as he believes that the riots are just Terex’s way of eliminating the competition and that he is in no danger.

Things don’t look too good for our heroes because they have no place to go and Snap is hurt, but Poe has a secret weapon. As we saw in the last issue, the droids have encountered the problems of their own, but nothing a plucky orange ball can’t handle. 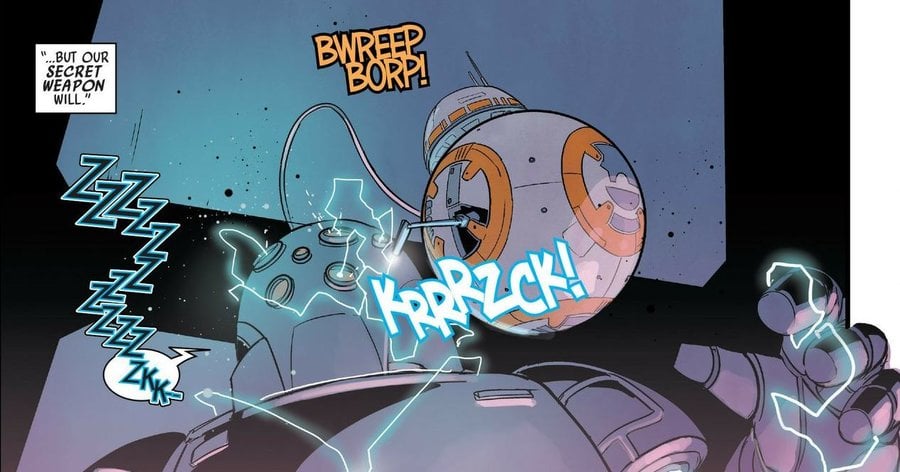 With the help of the droids, the Squadron takes out planet’s gravity shield, stopping the riot and allowing them to free Grakkus. The corrupt warden has no other option but to let them leave in exchange for the control over the planet, otherwise the ten times standard gravity would kill the inmates and she will be destroyed. 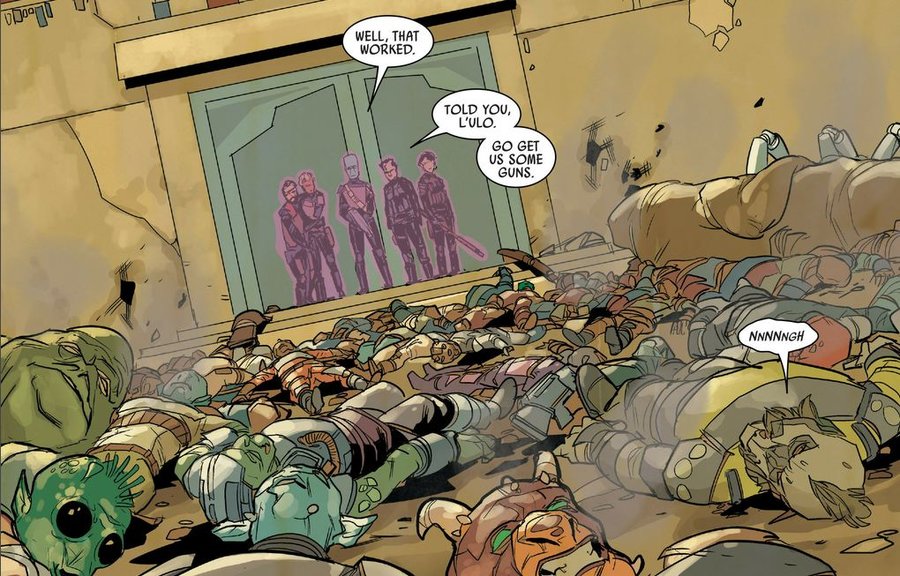 The crime lords who conspired with Terex learn his true nature when the agent calls hidden Carrion Spike and leaves them to their fate.

Terex attacks the station, whether to cover his failure or force Poe and his team from jumping to hyperspace. He certainly took Poe’s measure there – Poe wasn’t going to allow people on the station, evacuation shuttles or planet to die. The Black Squadron attacks Carrion Spike in spite the orders not to engage the First Order and Terex is forced to flee.

Back on D’Qar, Poe reports to General Leia and gives her the information provided by Grakkus. She assesses that the information is valid, but doesn’t want for Poe to follow those clues yet. It is clear that Terex knows Black Squadron’s every step and Poe needs to investigate how. Since BB-8 found the tracker attached to Poe’s X-Wing in the first issue, it cannot be that and someone had attached it there. So, it’s safe to say that Resistance has a spy in their midst. A spy in Black Squadron?

The issue ends with Terex reporting to Phasma. It is needless to say that the First Order is not happy with him and they want him to return for a debriefing. Terex, however, has no intention to play by their rules. Let’s just say, I wouldn’t like to see what he has in store for our heroes next time they meet. 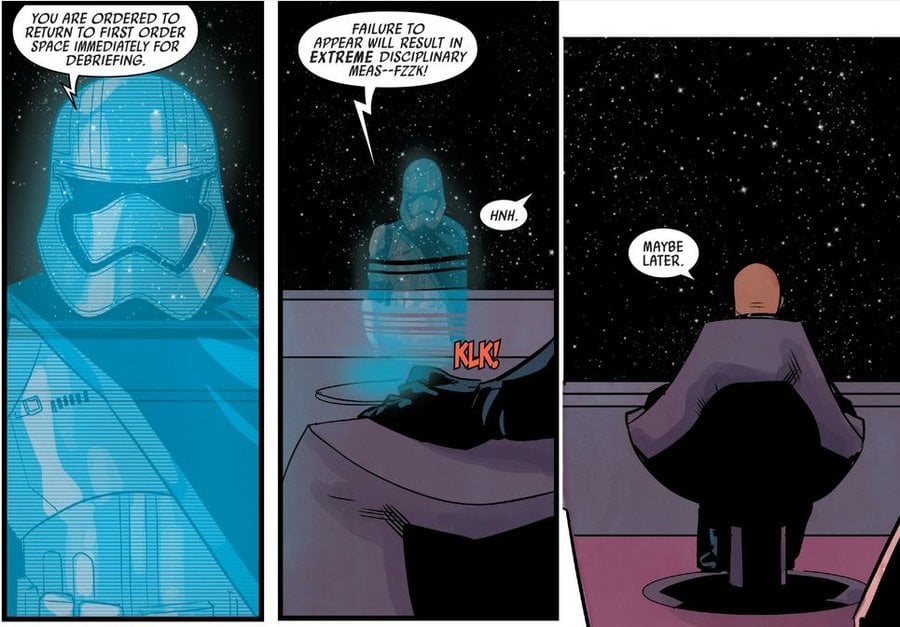 This issue answered one of the questions fans had when the series was announced: How will it sustain an ongoing story if it follows Poe’s search for Lor san Tekka alone? You cannot stretch that story indefinitely; it has to end with the beginning of The Force Awakens. Now we see that the comic will include other missions as well, first of which is finding how Terex is always one step ahead of our heroes. I have my suspicions, but we will see.

The strength of this comic isn’t the story – we know how it eventually ends. What I like about it is little tidbits we are getting about the state of the galaxy and the characters. Terex is a fascinating character. Capable opportunist, he obviously learned a thing or two during the Empire, but how much and from whom? He claims he was a stormtrooper. Someone like Sergeant Kreel, perhaps? I still want to know how he got Tarkin’s ship. This issue shows us a complete lack of any kind of moral fiber, not even the fabled ‘honor among the thieves’. He also has considerable temper that will continue to get tested if he continues to chase after the Black Squadron. His standing with the First Order is questionable as well.

Being action-packed, the issue doesn’t offer many of these character moment, except Karé Kun’s obvious concern for hurt Snap. Soule and Noto together, though, offer this adorable moment when BB-8 has to disclose to Jessica Pava that her astromech is gone.

This was a decent issue, but if you are not following it from the beginning, it’s not also the issue to start with. I am hoping to see more about the members of the Black Squadron in the next issues as well as more about Terex.

At this point, we know we are looking at the new adventure for Poe Dameron. There is some confusion about the next issue as Marvel completely replaced the announced cover and description. They also increased the number of pages and it is done by completely different artist. I think we are looking at the filler issue and an one-off adventure for Poe before Noto returns in the consequent issues and we see Terex’s revenge on Poe and the Black Squadron. As it stands, this is… 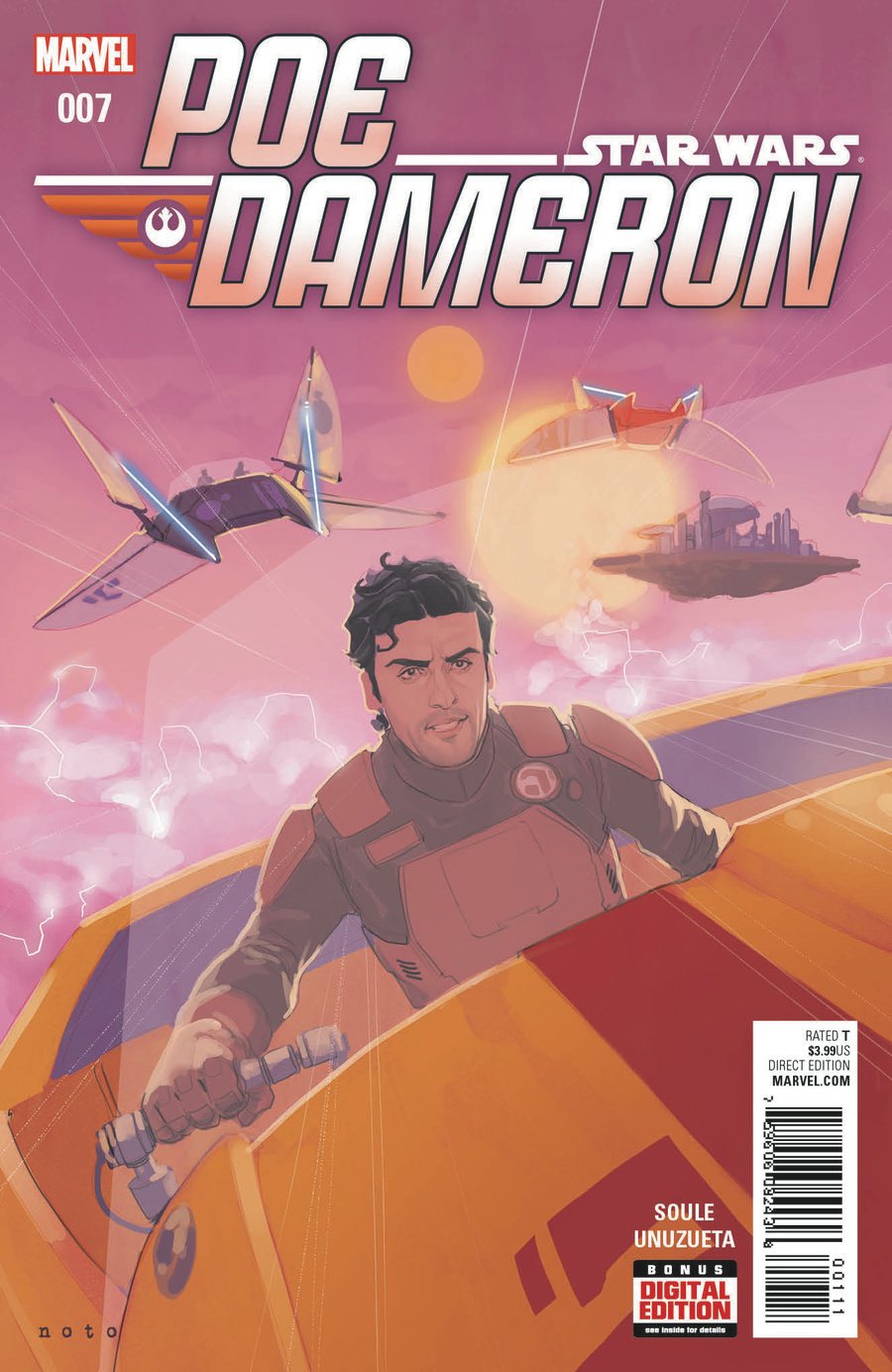 • Even Resistance soldier Poe Dameron deserves a day off to meet an old friend.
• But what happens when that old friend is the famed journalist Suralinda Javos with a secret story on the evil First Order?
• Mayhem ensues when Poe and Suralinda find themselves trapped with a giant First Order target on their backs!