SWNN Review: Star Wars Rebels – The Future of the Force! 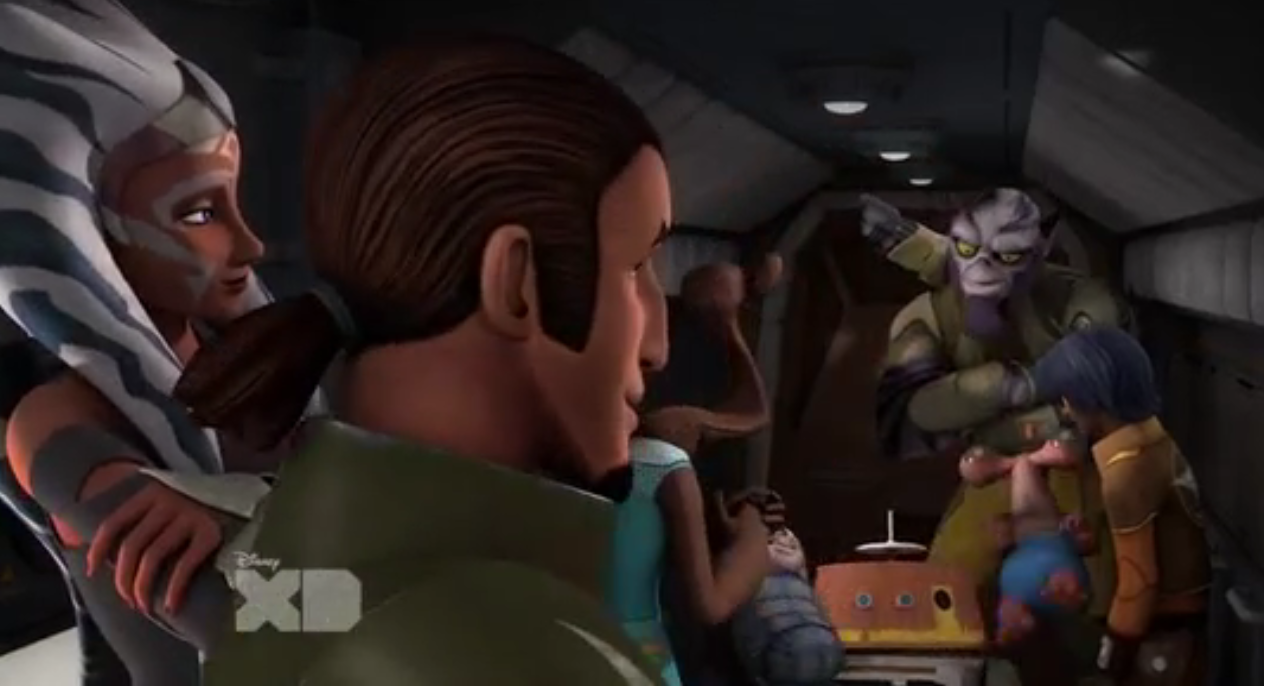 For those who’ve been enjoying season 2 of Rebels, yet have been patiently waiting for a “big moment” to accompany some of the “fluffier” ones, The Future of the Force has got you covered. We knew that a longer season meant perhaps a few more installments of the filler variety, but this week fans got something they’ve no doubt been waiting for a while  to see … namely adult Ahosoka in action with those two pure white lightsabers. Read on after the jump for more. 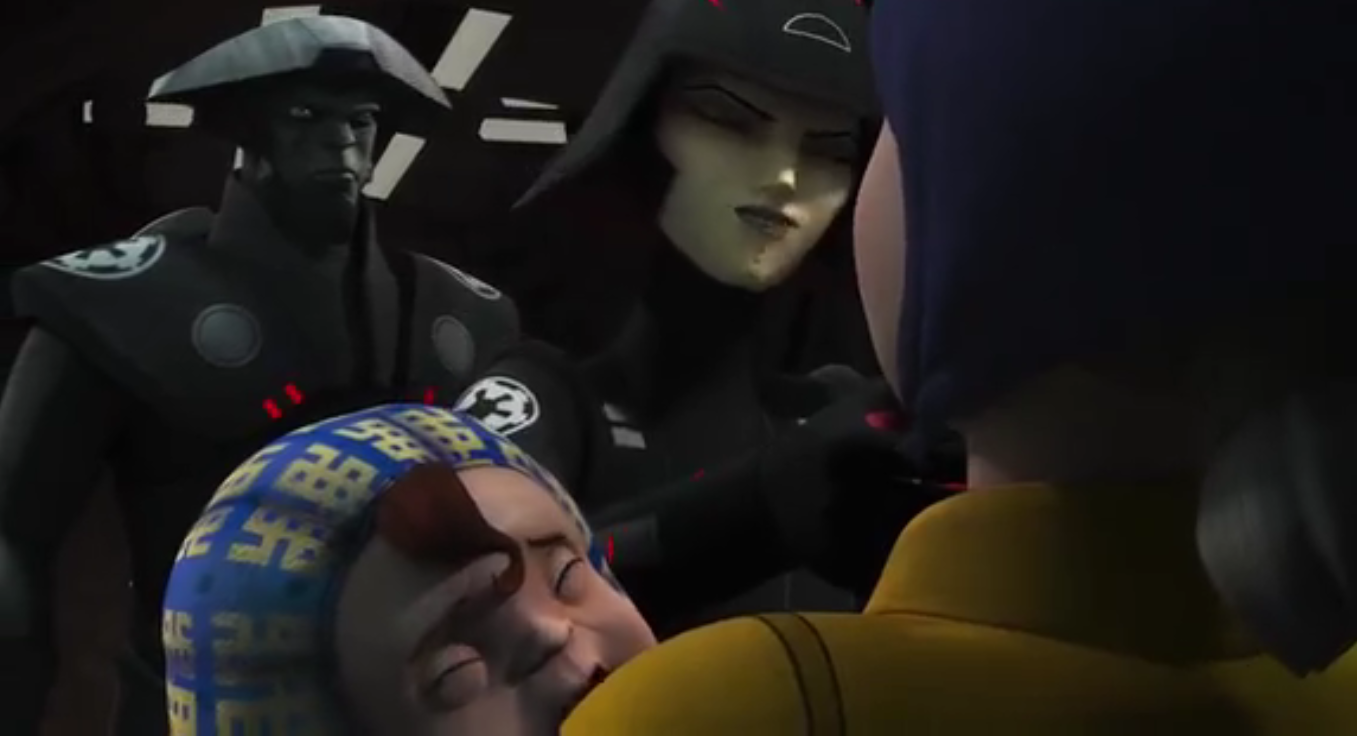 The show starts off with a bit of a nod to both the Clone Wars series and another fantasy world from the mind of George Lucas. For those of you who’ve seen Willow, you know what I’m referencing. Much like in that film, there’s a child named Alora who has extraordinary mystical abilities and is being hunted by agents of evil, who want to harness or silence this power.

Alora’s grandmother is trying to get her Force-sensitive baby safely away from the Inquisitors. However, she’s cornered and the 5th brother and 7th sister both capture Alora and kill just about everybody else on board.

On Garel, Ahsoka has a meeting with Kanan involving “Jedi business”. Ahsoka reveals that during her investigation into the Sith Lord, she learned the Inquisitors are not only tasked with hunting Jedi, but also have a secondary mission of making retrievals. The search yielded two coordinates that she was able to decode. While Ahsoka will investigate on set, she dispatches Kanan, Ezra, Zeb and Chopper to look into the other.

Ahsoka’s search takes her to the now derelict ship where the Inquisitors captured Alora.  She comes across Alora’s grandmother, who’s in bad shape, but still alive. 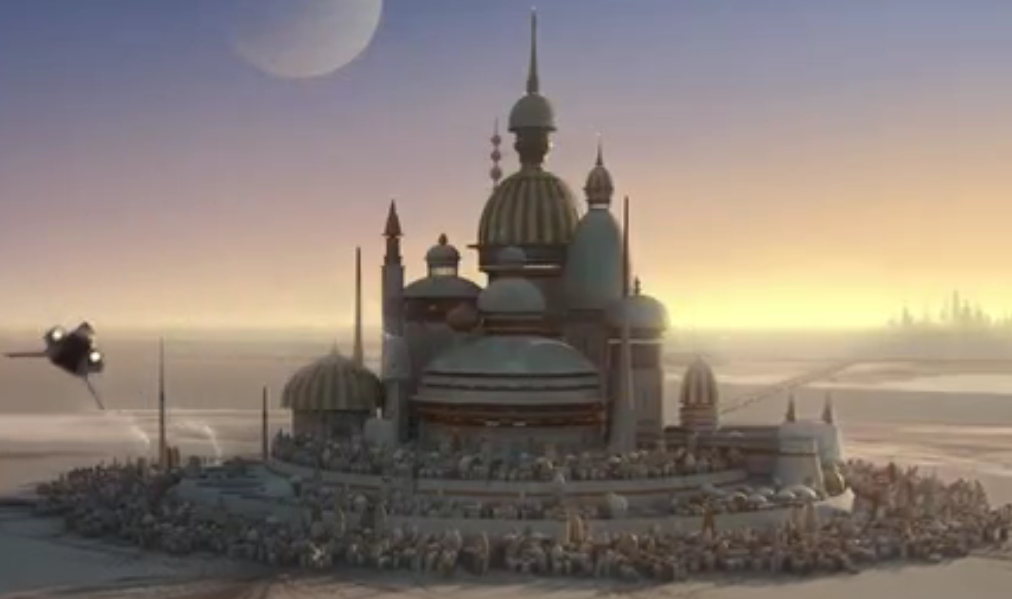 Meanwhile, Kanan and company arrive on the planet Takobo.  Zeb and Chopper come across two advance TIE fighters while searching spaceports across the city, finding Alora in the cockpit of one, before detonating both ships.  Kanan and Ezra arrive at the apartment they were seeking and find an injured female Ithorian, named Oora.  Oora informs them that two people, wielding red blades, were looking for her child.  Fortunately, she managed to send her baby off with a droid.

Zeb eventually comes across the droid and takes the Ithorian child, Pypey to a nearby apartment. Kanan and Ezra catch up with him, as well as the Inquisitors. The Sith servants are able to sense the child’s fear and pursue our crew through the building. Our heroes tread carefully, as red lightsaber blades follow their every move, piercing through the floors and walls. 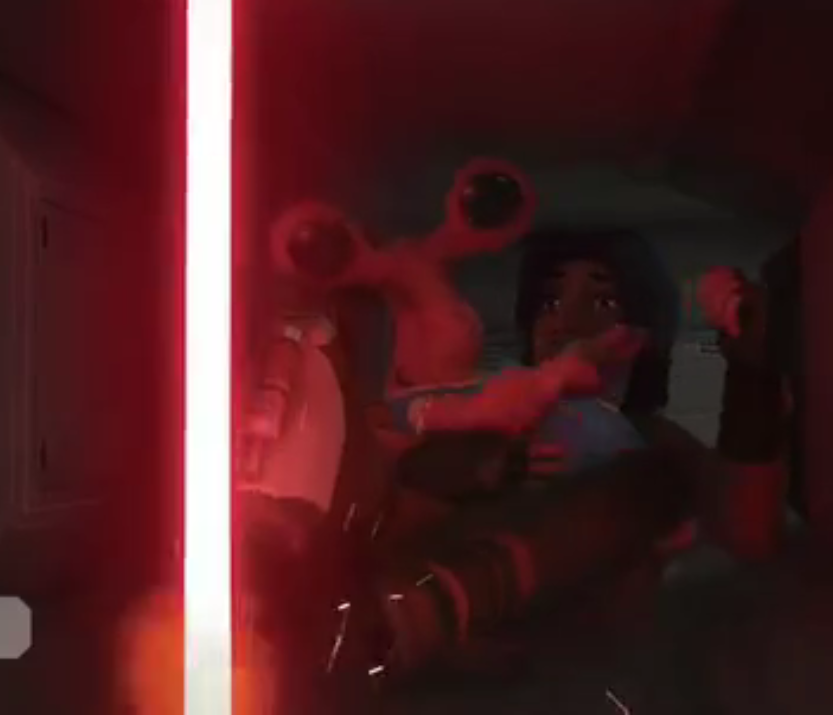 Kanan and crew escape the apartment and make way for the Phantom, getting cornered by the Inquisitors in the process. While Ezra protects Pypey, Kanan takes on both darksiders, holding his own for a bit. Still, the two of them are too much for Kanan. When all seems lost, Ahsoka Tano arrives and saves the day in fantastic fashion. After single-handedly defeating the Inquisitors, she escapes when Imperial reinforcements arrive.

On board the Ghost with both Force-sensitive children, it’s agreed that without the Jedi to protect the children of the Force, it’s up to our heroes from the Rebellion to take up this task. Meanwhile, the 7th sister’s probe droid plays back a recording of Ezra revealing that the rebels are based on Garel. 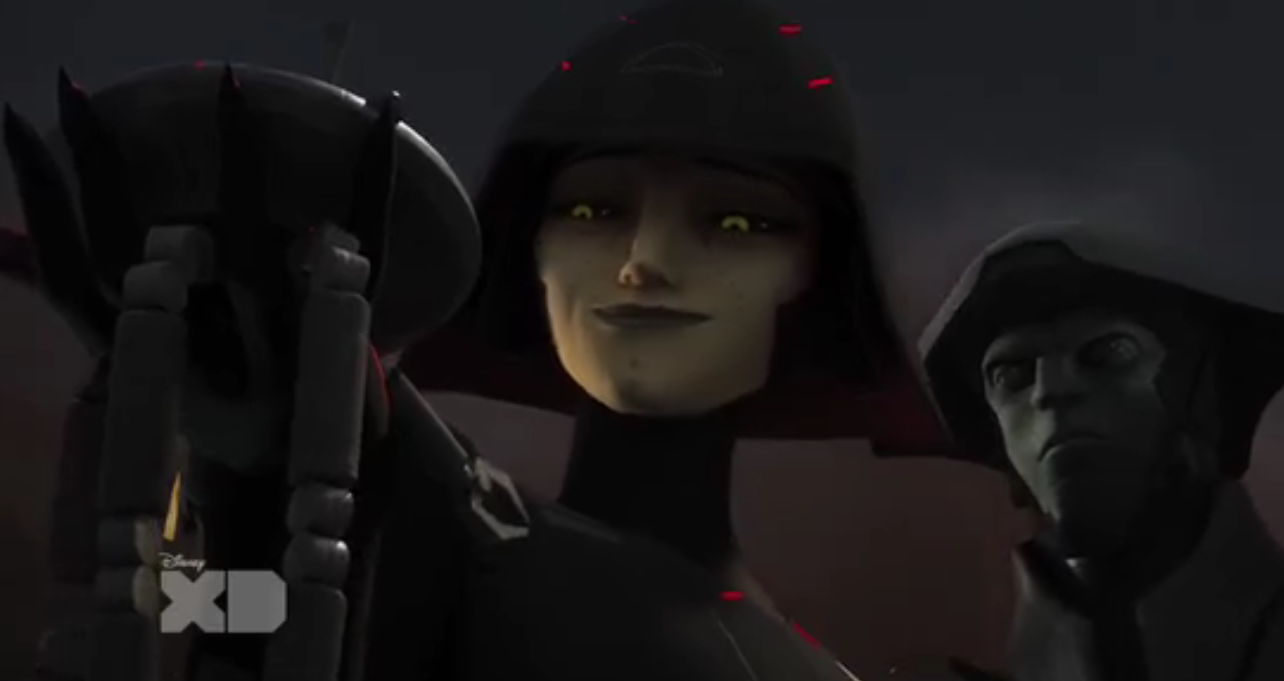 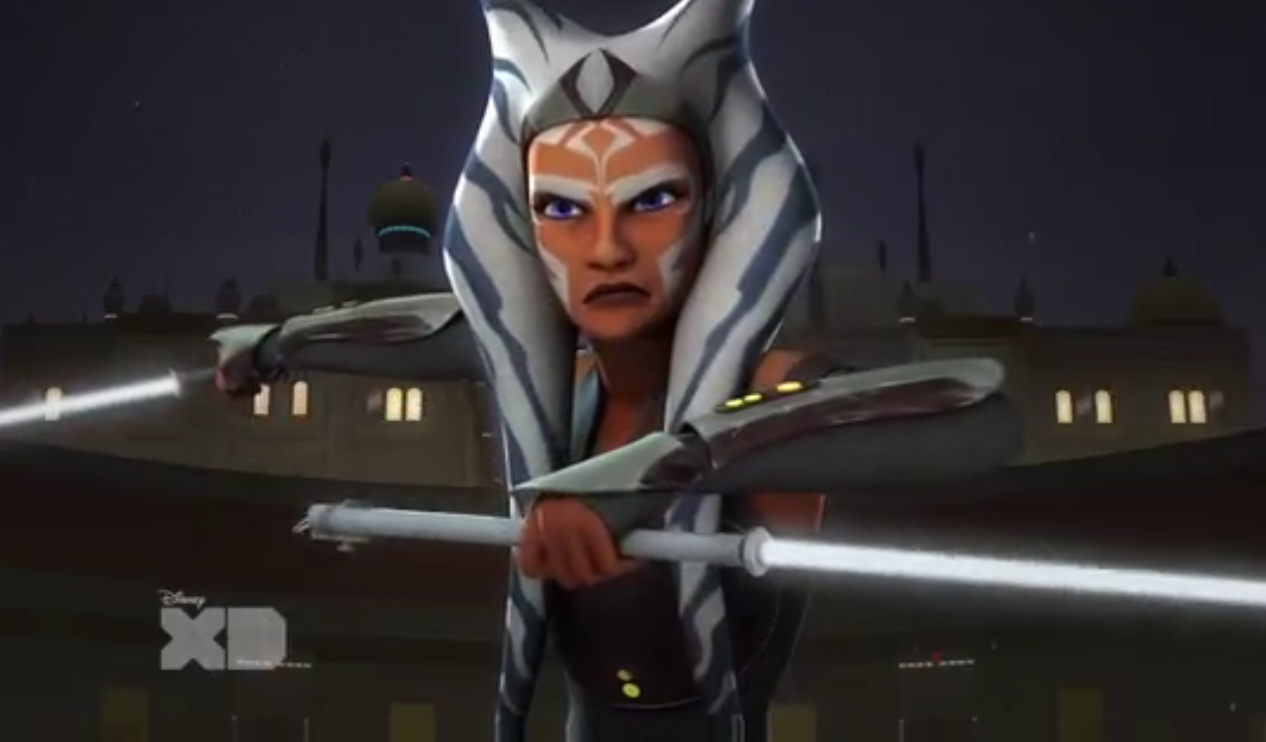 In short, this was THE highlight of an episode with a lot of great moments. It’s been awhile since we’ve seen Snips in combat and man was she ever badass!  The white sabers with the samarui-like hilts are visually stunning and unique. We always knew what a fierce warrior Ahsoka was, but here we see a refined version. She’s a little less of a showboat and appears to be much more in tune with her Force abilities. At no point during the duel did you get the feeling that Ahsoka wasn’t completely in control. She even has a Qui-Gon Jinn – esque zen moment where she simply turns off her blades, then calmly disarms and Force pushes the Seventh sister with incredible power.

As the episode went along, I found myself wondering more and more if this would finally be the one where we got to see her do battle.  At first I thought, we might just see Kanan and Ezra barely fight the Inquisitors to a draw.  Sure enough, when all hope seemed lost, Ahsoka comes out of blazing white light to give our crew the needed escape path.

The Inquisitors were much more foreboding. 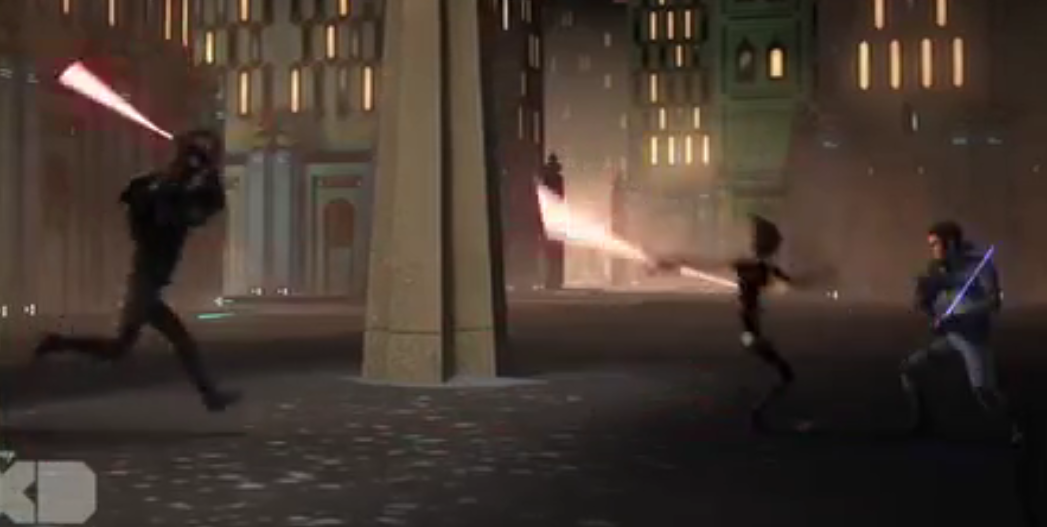 One of my nitpicks from the first appearance of the new Sith underlings was that they weren’t particularly menacing. This time around, the writers did a better job of making you feel that the crew was truly in danger. The sabers randomly piercing through walls and floors certainly was a nice touch. Whereas the first time around, Ezra and Zeb seemed to outsmart the Inquisitors too easily, here you truly felt that Kanan was in trouble and overmatched when fighting them.

Children of the Force. 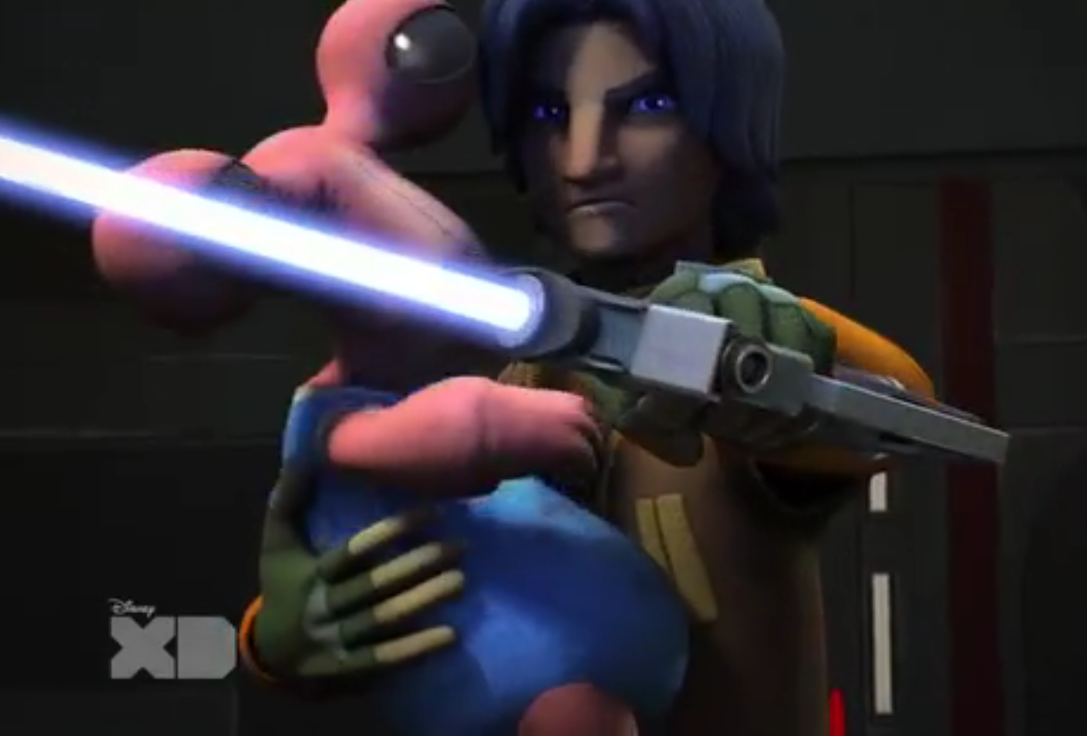 This was a nice callback to a plot thread that was left dangling during the Clone Wars series and was reintroduced in Spark of the Rebellion, via Vader’s mission statement to the Grand Inquisitor. From TCW, we know that Palpatine has plans for Force-sensitive children. Some of them may be trained to become Inquisitors, some may be slaughtered if they can’t be tempted to the Dark Side and others may be involved in yet another dark plan.  During Rebels Recon, Pablo Hidalgo alluded to these dark intentions, with the idea that Palpatine might harness their Force-sensitivity in order to help him see into the future.

It’s nice to see this key plot point not abandoned. Now that our crew is aware of these dark designs and have agreed to protect (and possibly train?) these children, it will be interesting to see how this story line is handled moving forward (as we don’t seem to have many Force-sensitives running around in the OT). 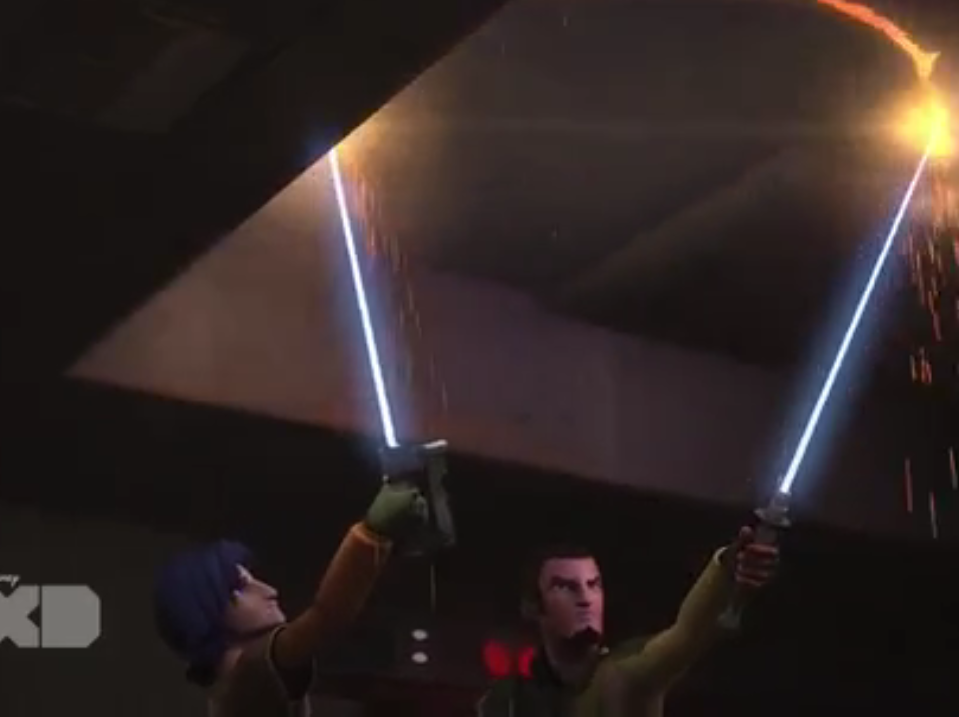 Honestly, I have nothing but good things to say about this one. 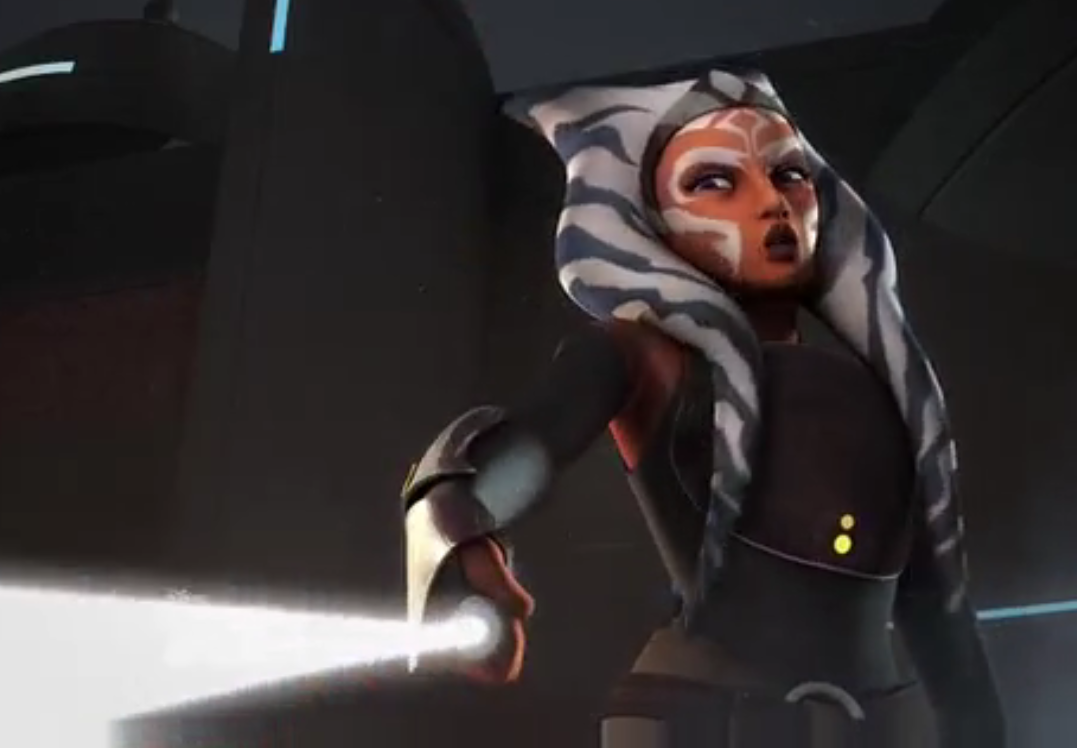 There has been quite a few fun, yet one-off adventures this season. While the stories overall have been great, not all of them have really driven the plot forward. This week we got movement on probably the two over-arching main plot threads.

The first was the investigation into the Sith threat. Ahsoka’s search hasn’t uncovered anything about who Vader is, yet our heroes now know about the Inquisitor’s second mission of seeking out Force-sensitive children. The second involves the rebels’ search for a new base. The cliffhanger showed us that the Inquisitors now know about the base on Garel.  With this reveal, it’s certain that this spot will no longer be a safe-haven, making the mission to find a new location even more urgent. 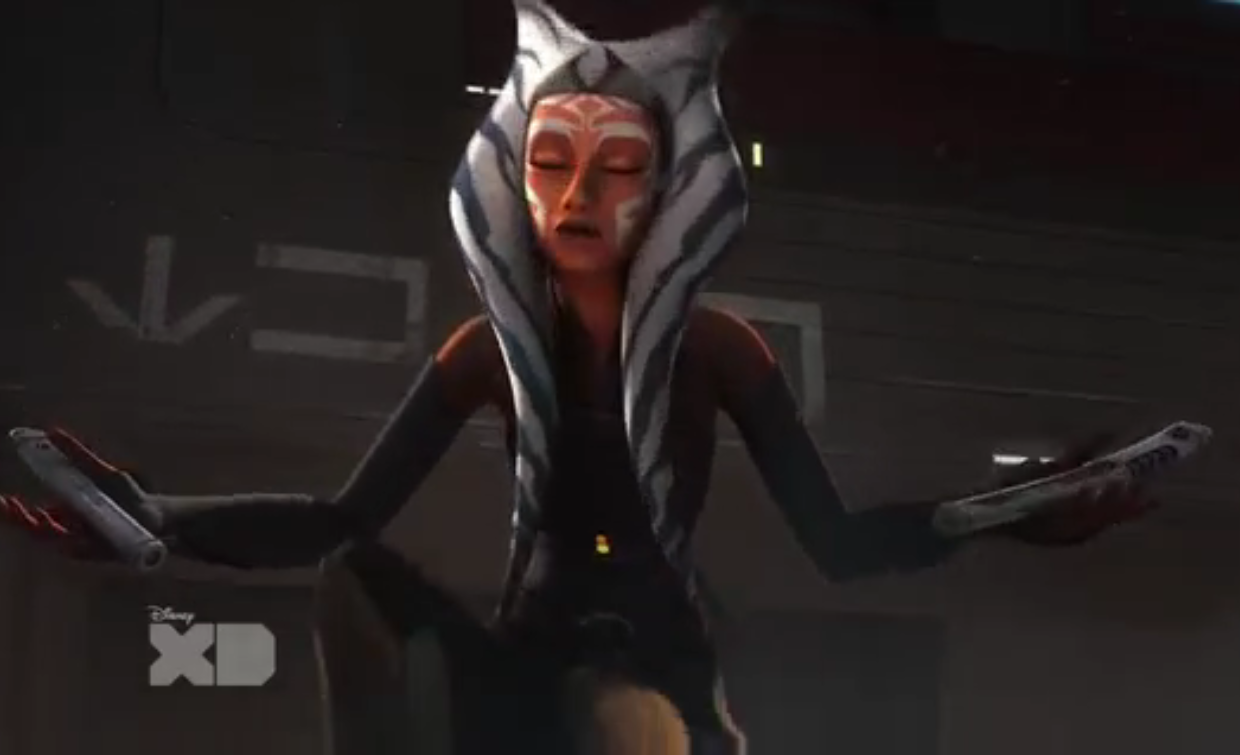 I wonder if we won’t see the secret Inquisitorius training facility on Arkanis soon. This is where Zare’s sister, Dahra, was taken to. This ties into the Servants of the Empire series.

The pacing has actually been great this season. Having episodes that had nice adventures that were a bit fluffy in content only enhanced the big finale of this edition, making you appreciate the build-up and wait even more.

What did you think of the episode? Where do you see the children of the Force story line going? How has the pacing been in your mind? Sound off in the comments below or at the Cantina.