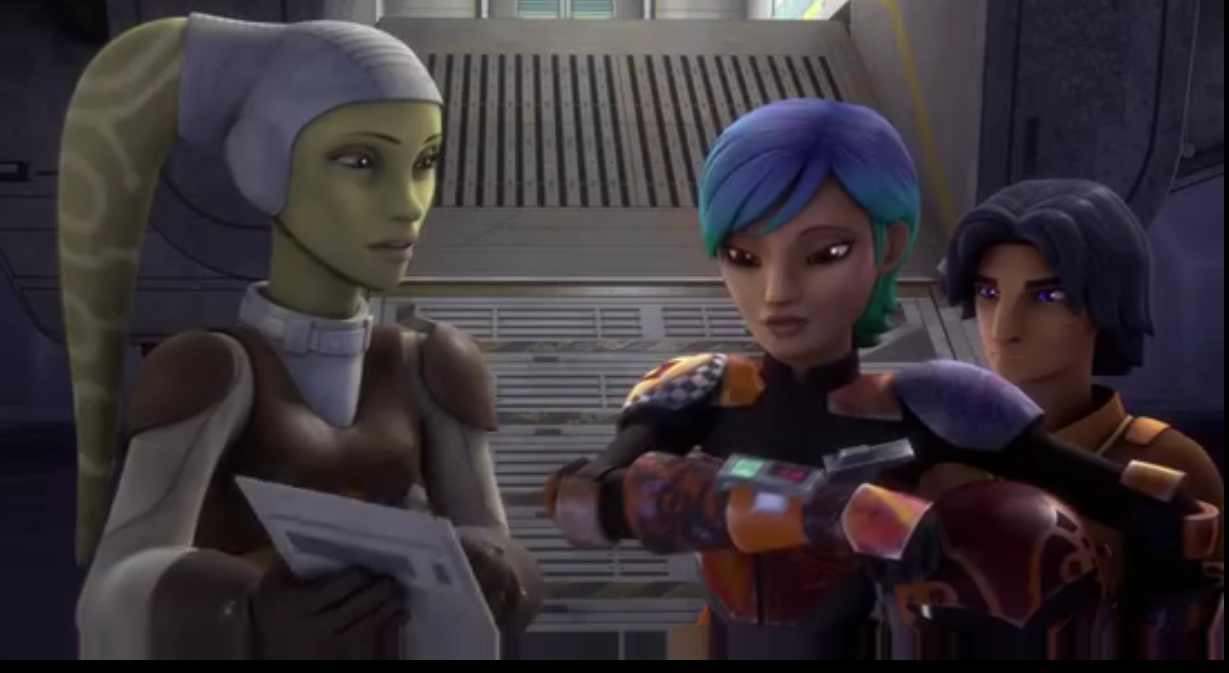 Another week, another mission. Hera has one for Sabine this time. Her task is to find a courier with secret information for the rebels. Sabine has to locate and then transport the courier to Havoc Outpost.  Sounds easy enough, right? Not so much. The problem is Hera has no clue what this courier looks like. The only way to identify them is by using the phrase, “It’s a long way to Alderaan”. 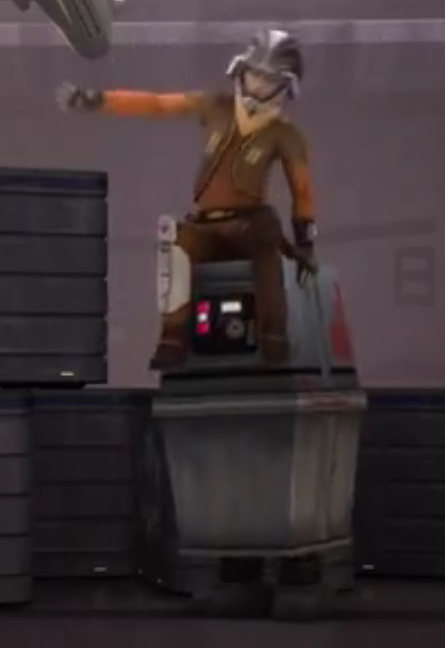 Sabine, along with Ezra and Chopper arrive at the spaceport and have several (often awkward and comedic) interactions with passengers of arriving craft, to no avail. After all but giving up, the crew discovers by chance that the courier is in fact a gonk droid that goes by the designation, EG-86.

Earlier Sabine had taken notice of  symbol spray-painted onto a wall at the spaceport. We learn that she wasn’t just admiring a fellow artist’s work. The Mandalorian has a past with the party who left this “calling card.” We meet a bounty hunter named Ketsu Onyo and learn that she was a student alongside Sabine at the Imperial academy on Mandalore. This armored and helmeted bounty hunter is also seeking the courier droid. Like Sabine, Onyo is doing work for an organization not affiliated with the Empire, namely the Black Sun crime syndicate.

After a less than pleasantly nostalgic reunion, Sabine let’s it be known that she won’t be handing over EG-86 to the bounty hunter. We learn a bit of their rocky, shared past. In short, they both left the academy together in order to pursue careers as bounty hunters. It turns out that, though they were once the best of friends and partners in hunting, at some point Onyo betrayed Sabine. The duo had originally planned on joining Black Sun together. Just how drastically their paths have diverged is highlighted.

The one-time associates are once again to bear arms together when a garrison of stormtroopers present a common problem to overcome. It’s very apparent how well the two work together. Sabine and company make their escape aboard the shuttle during the ensuing firefight. Onyo is able to hold her own by herself and manages to defeat the troopers. Ezra is knocked off the shuttle while the escape is in progress. Despite this, Sabine continues the mission. Just before making the jump to Havoc Outpost, Onyo’s ship the Shadow Chaser approaches and blows away a side hatch, opening the rebels’ shuttle to the vacuum of space. Semi-comically Chopper gets blown out into space, yet EG-86 gets stuck in the opening and Sabine is able to turn on the force-field, sealing the ship. 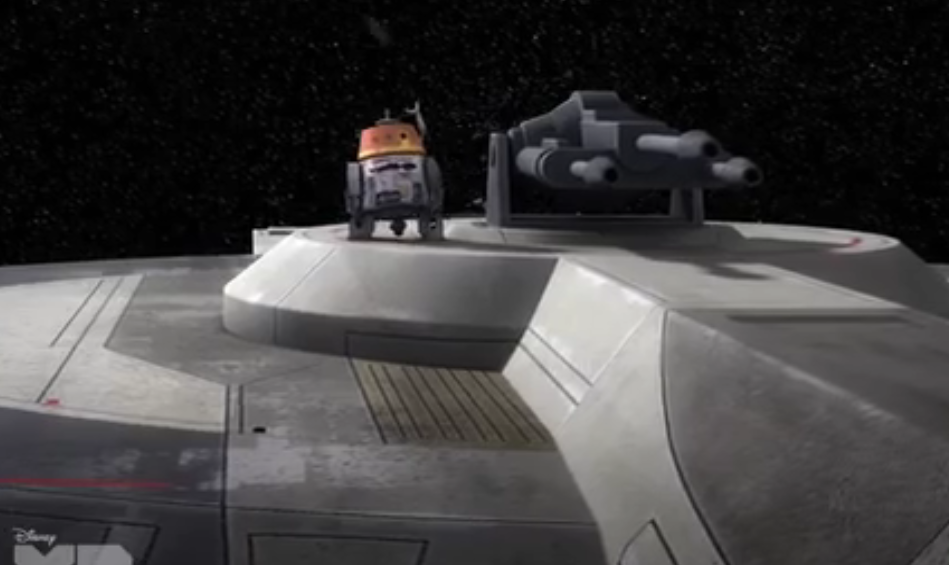 Onyo threatens to destroy the shuttle if the gonk droid isn’t handed over. Unawares is the bounty hunter know that Chopper has ended up on the hull of the Shadow Chaser. Sabine realizes that these threats will soon be empty, as Chopper is works to disable the guns on Onyo’s vessel. Despite this advantage, Sabine tries to talk her former friend down. She expresses the divergent paths their lives have gone on by explaining that their is no loyalty among members of the Black Sun. Such mercenaries would even turn on their own members for money.  Wren begins to make her exit, but Chopper ends up captured by Onyo. Sabine agrees to a trade, yet it’s clear upon meeting that she will not actually hand over the courier under any circumstances. Desperate, Onyo offers to split the bounty with Sabine, who simply pleads with her ex-compatriot to consider the fulfilling life she’s found among the rebels.  Sabine explains that where she once lived to increase her wealth, she’s now part of a just cause and has new meaning in her life. 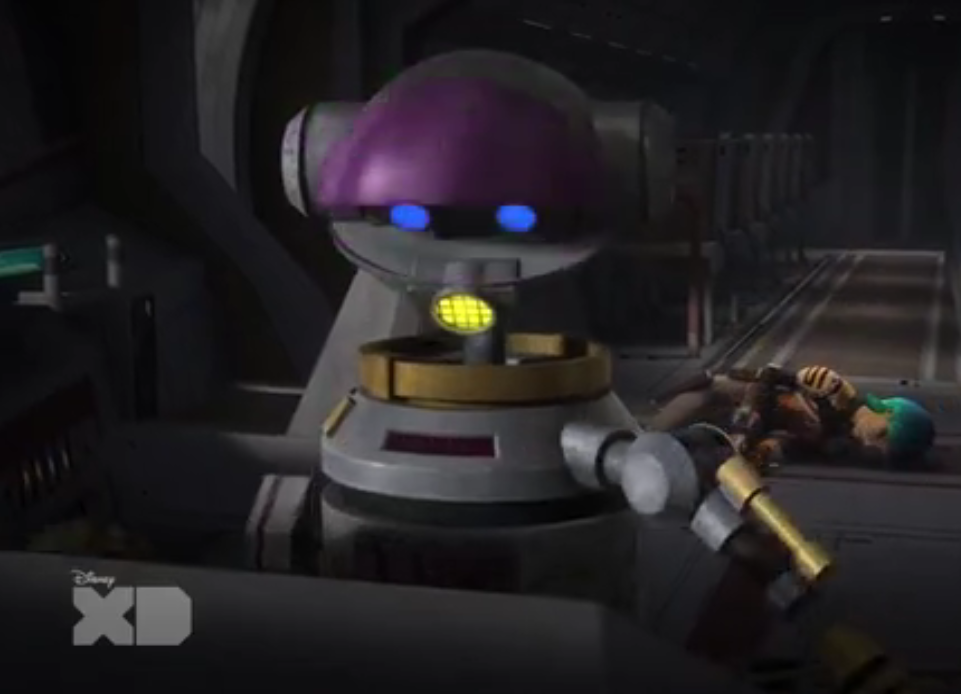 Things are made more complicated with the arrival of an Imperial ship. The docked Shadow Chaser and shuttle are ordered to surrender.  Sabine has a plan, however. Chopper sets the hyperdrive to overload and the rebels are able to trick the Imperials into thinking that they could very well self-destruct. The (once-again) frenemies work together to plant bombs around the shuttle and despite being locked in a tractor beam by the Imperial cruiser are able to escape during the shuttle’s explosion. Onyo shows her true colors during all of this and actually saves Sabine when she’s knocked unconscious on the shuttle.

After completing the mission to Havoc Outpost, which includes a cameo by R2-D2, our crew meets up with the rest of the rebel cell. Ezra is waiting alongside Hera and Onyo is once again offered an open invitation to join the Rebellion. The Mandalorian duo shake on this proposition and Onyo flies off with Ezra speculating that they have not seen the last of the bounty hunter. 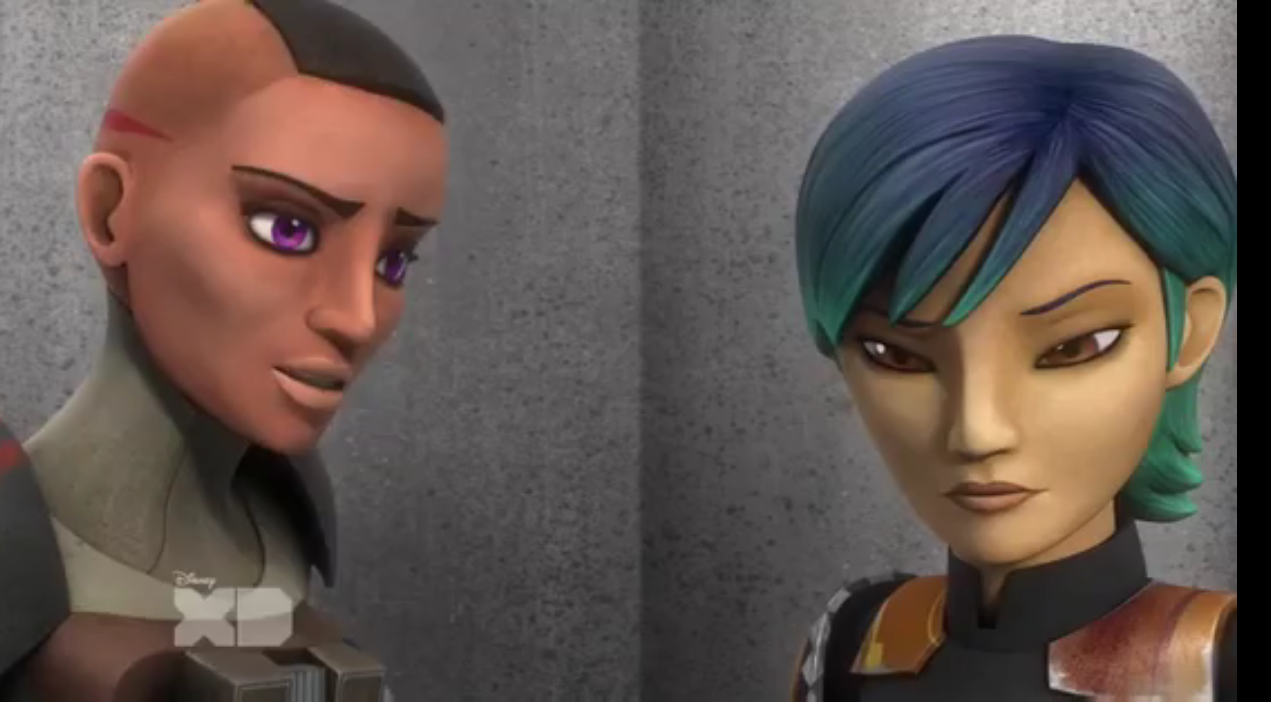 It’s been a delicate balancing act since the inception of the show, mixing both old and new. As fans, I feel like we enjoy seeing familiar faces, yet desire new characters as well. This week we got a cameo from a fan favorite and franchise stape (Artoo) in addition to an intriguing new one (Onyo).

Despite falling in love with the new rebels during the first season, many fans were left feeling that they didn’t truly know them on a profound level. This year we’ve been promised more on this front and the production staff has delivered so far. Sabine was probably the character most shrouded in mystery after the first run and it’s addressed in this episode that while she may be a bit of a loner, it wasn’t always that way. There’s a reason for her seeming tendency to distance herself from others.

While it’s admirable that Sabine wanted to complete her mission, she seemed to leave Ezra behind with virtually no reluctance (at least on screen). Yes, it’s logical that the mission come first. Still, she didn’t even seem to bat an eye that Ezra was separated from the crew.

No Weight to Missions

I do recognize that in the end, the missions in these kinds of stories are backdrop than anything else, serving as a stage for character development, it would be nice to know more about the mission. Not knowing, seems to limit dramatic effect. We don’t need to know the mission in great detail, but a little more stage setting would be nice. 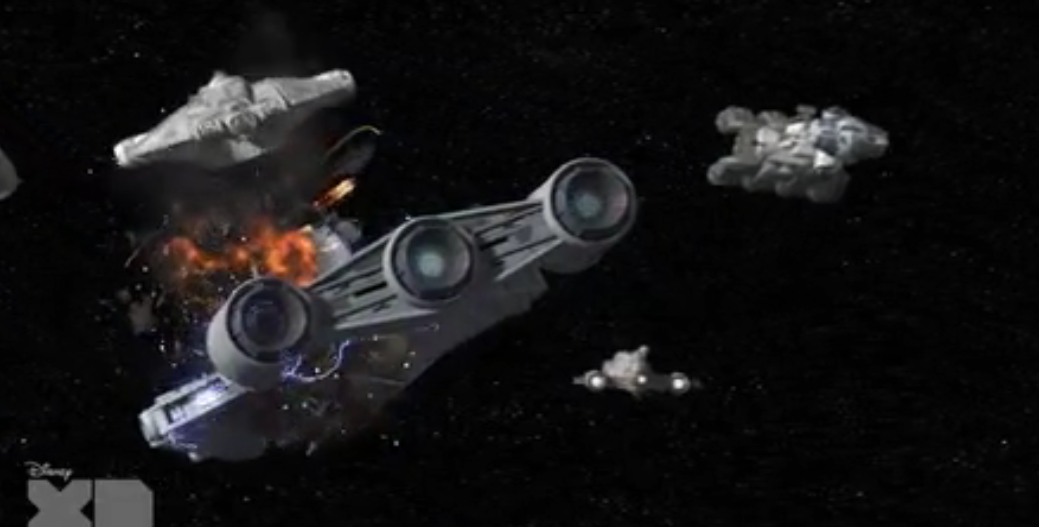 From here on out I’m going to make a conscious effort to avoid the word “filler”. In the end, more episodes are a bit of a trade-off. In order to get more episodes, it’s better to accept the fact that we’ll get more stories that don’t necessarily drive the plot forward in a substantial way. 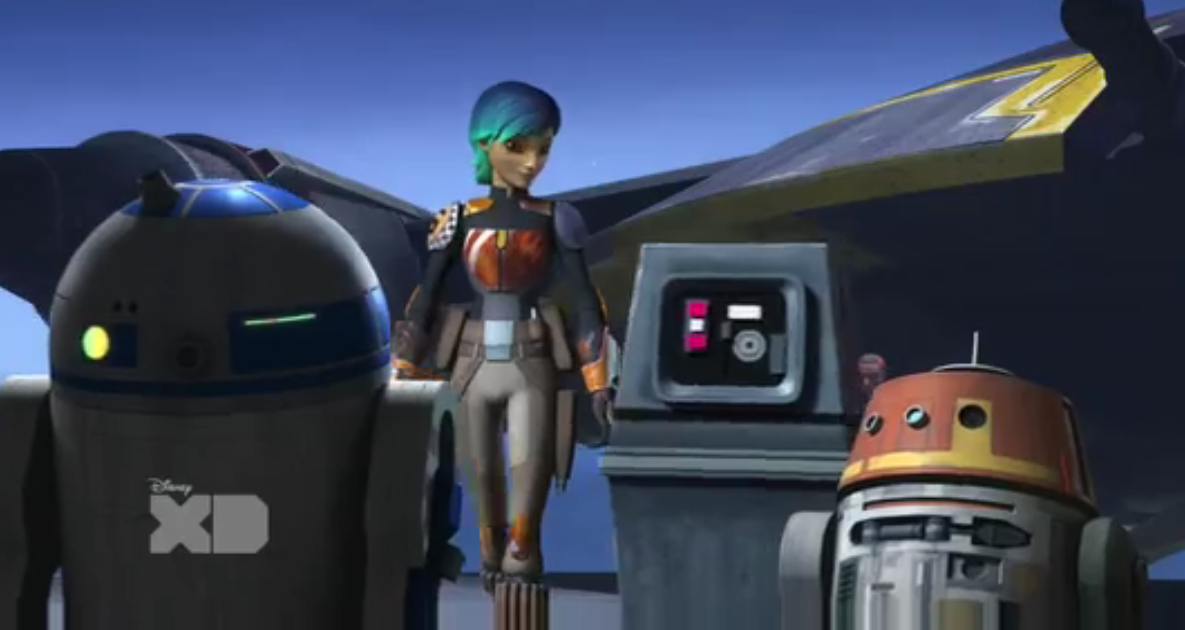 In the end, Star Wars is a set of adventure stories. Not everything has to be a key piece to a larger puzzle. Don’t get me wrong, I love episodes that have a ripple effect and affect the larger picture. However, I’d rather have 20 episodes that feature several one-off tales, than 14 that all have “wow” moments.

On a side note … Filoni mentioned during Rebels Recon that Onyo’s design was inspired by discarded TFA concept art. My guess was that it was a possible early design for Sarcco Plank.

What did you think? Did you like the episode? What did you make of Ketsu Onyo? Is this season rivaling the first in scope and substance? Sound off in the Cantina or in the comments below.