SW7N Review - The Empire Strikes Back: So You Want to Be a Jedi? - Star Wars News Net Go To Top
Skip to content

SW7N Review – The Empire Strikes Back: So You Want to Be a Jedi? 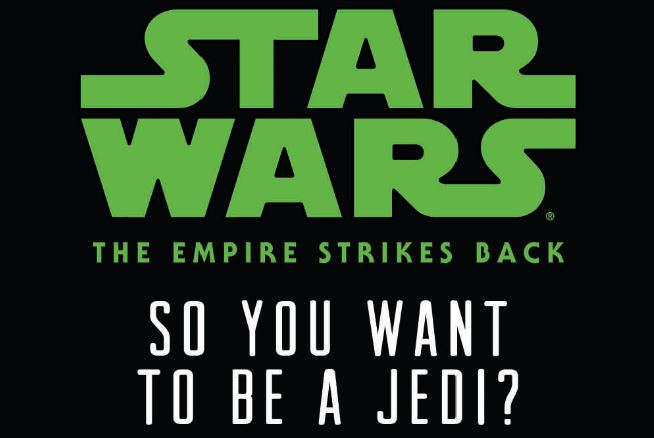 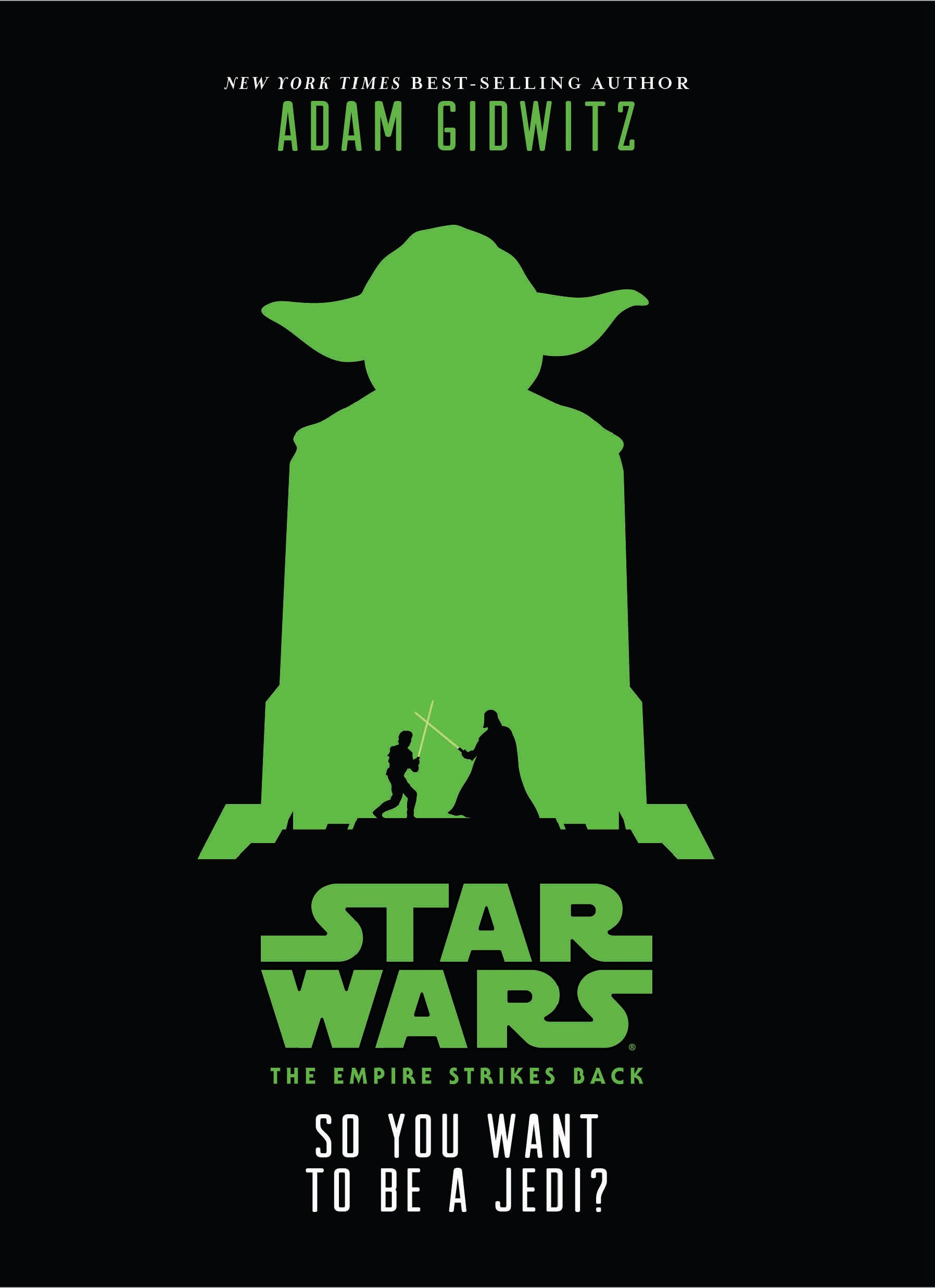 It’s no secret that I hold Alexandra Bracken’s A New Hope: The Princess, the Scoundrel, and the Farm Boy as a true gem of children’s literature.  It was a welcomed fresh take on A New Hope that added so much to the classic tale.  If you missed out on my review for that one, check it out here.

My son and I enjoyed Bracken’s novel so much that upon finishing it, I immediately went out and purchased the second part of the series, The Empire Strikes Back:  So You Want to Be a Jedi? by former teacher turned New York Times best-selling author Adam Gidwitz.

Adam’s books have been named ALA Notables; New York Times Editor’s Choice; and best book of the year by Publisher’s Weekly, School Library Journal, and Kirkus.  So naturally, I was excited to read his adaptation of my favorite film in the saga.  The result for me however, was disappointing to say the least. 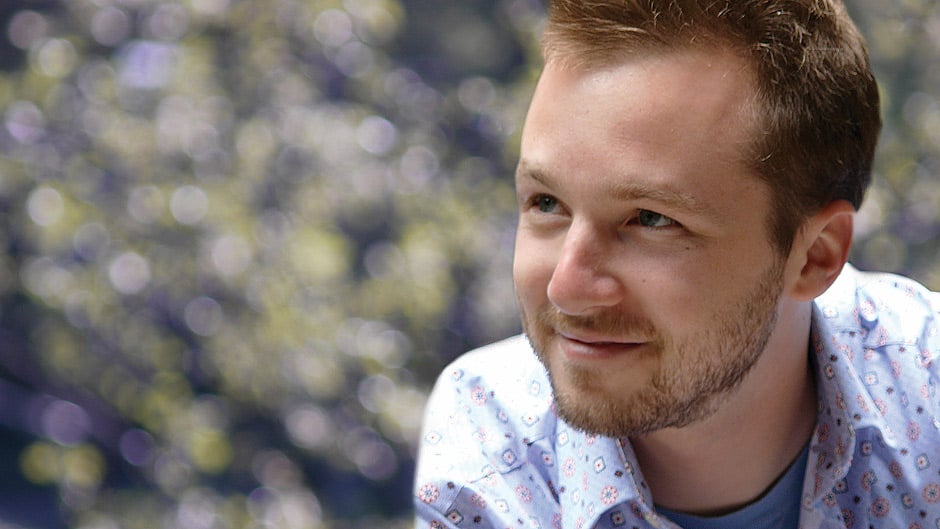 Gidwitz’s adaptation of the beloved film is not poorly written by any means.  It is not boring, nor does it lack imagination.  As a Star Wars fan though, especially as a fan of The Empire Strikes Back, this one let me down on so many other levels.

I guess Bracken’s adaptation set the bar too high and left me with certain expectations concerning the second installment of the series.  I’m going to vent about my issues with the book in a moment, but before I do, I want to tell you what Gidwitz did right.

First of all, like the one before it, this is a children’s book.  It’s written to children and for children.  So naturally one would assume right off the bat that an adult would not get as much enjoyment out of reading the novel as a child.  However, after Bracken previously killed that assumption with her adaptation of A New Hope, I guess I was expecting to enjoy this one much the same.

Sadly, this was not the case with this installment in the series.  That being said, I think younger kids will enjoy the heck out of this book, and I tried to read the book from that mindset as soon as I realized that it would not be as much of a fulfilling read for adults. 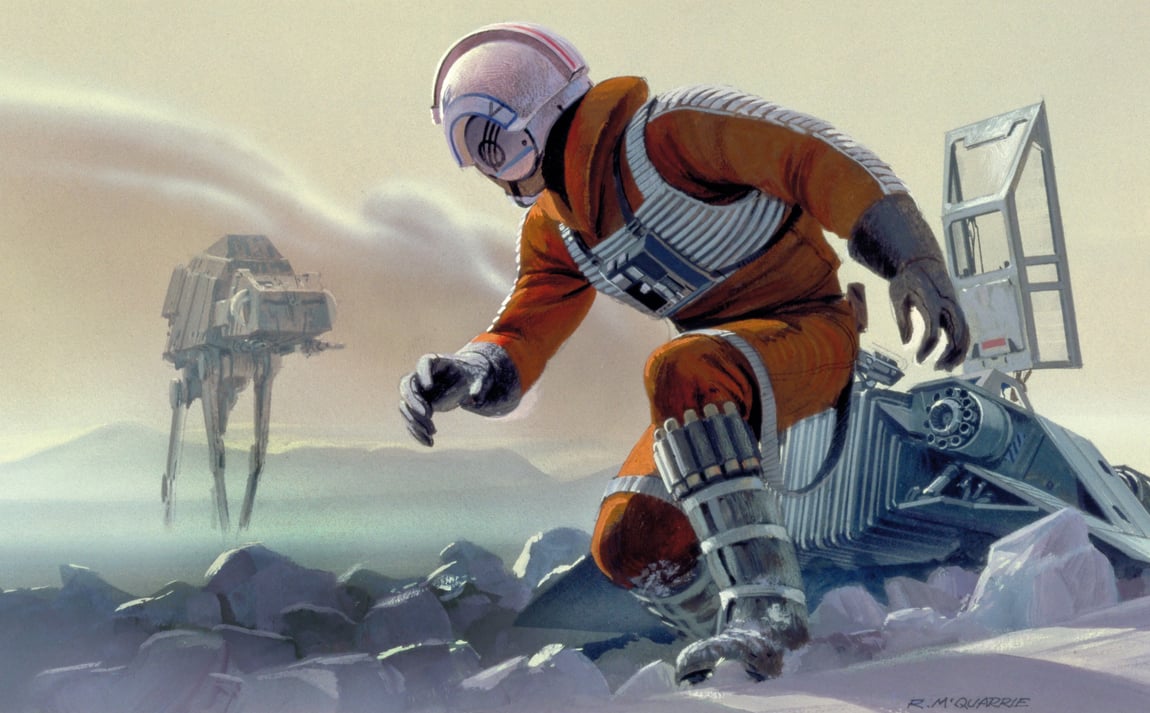 Gidwitz’s approach was hinged on the idea that all great characters are empty.  That is to say that the character is an Every Man who can be easily inhabited by yourself as you experience the story through his eyes.  From the start, Gidwitz attempts to literally do just that – by putting the reader in the shoes of Luke Skywalker.

The author substitutes “Luke” in the story with “you”, telling Luke’s story from the second person point of view, allowing the reader to actually become Luke Skywalker. This was a very interesting choice on the part of the author, and it worked for the most part.

One of the other devices used in this book are the Jedi training segments in between chapters.  These brief lessons instruct the reader in the ways of the Jedi, taking him from simple concentration techniques like closing your eyes and counting to ten while trying to focus only on the numbers, to more demanding challenges like standing on one foot with your eyes closed while deflecting soft objects that a helper is throwing at you or spelling your name backwards. 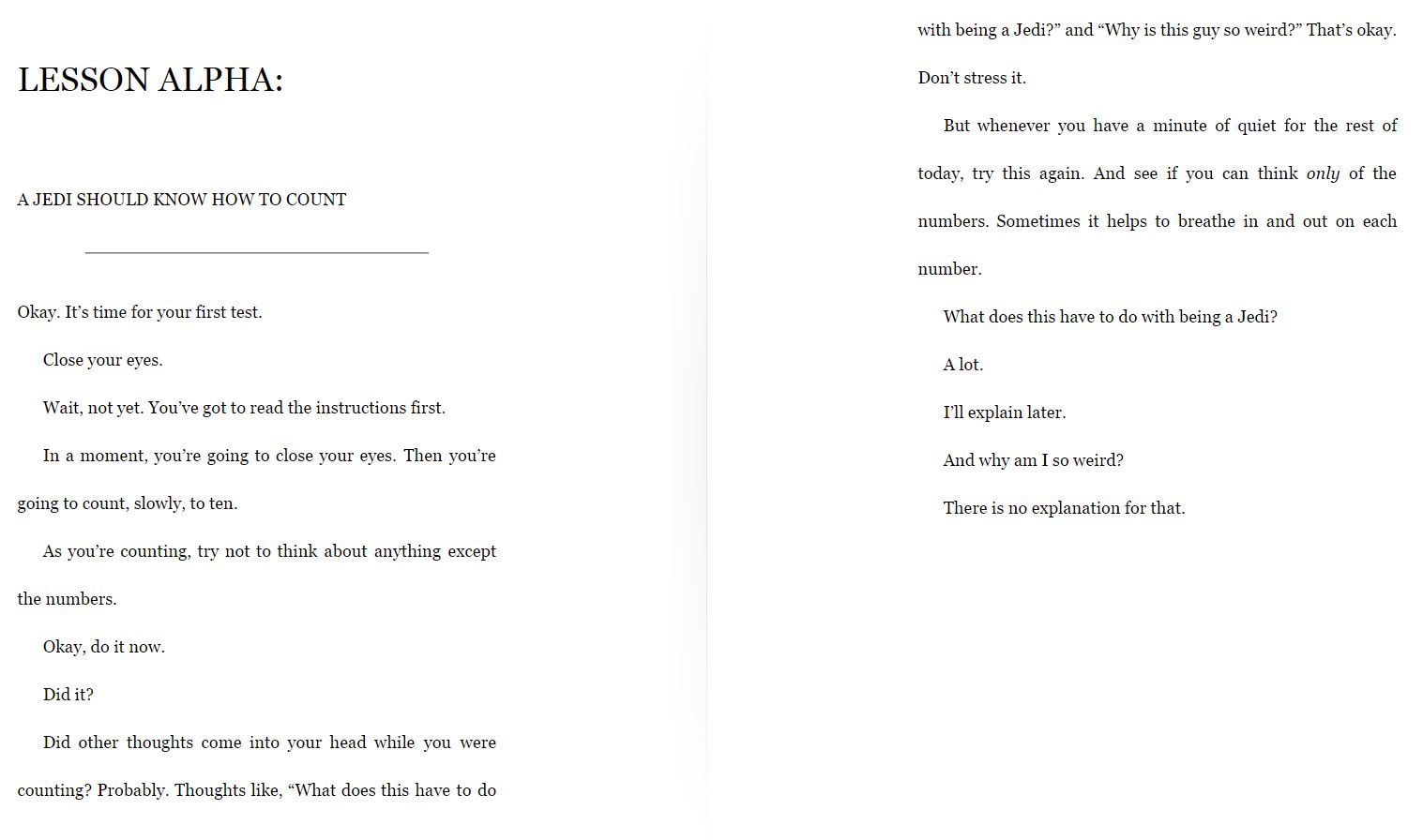 There are moral lessons as well, like being there for your friends, being kind to someone new, and standing up to injustice.  For the most part these are fun and will no doubt bring a lot of laughs as you go through them with your child.

There are a few places where the Force is discussed from an almost religious perspective also, so as a parent, I recommend that you read through these portions and decide if your child is capable of reading this for fun and not necessarily buying in to every word as truth.  Use your discretion here, but for the most part, these exercises are harmless and a lot of fun.

The story is fun, exciting, and has a good dose of humor to go along with it.  Like the ANH adaptation before it, this one also includes a healthy amount of original concept art from the film, and the story succeeds in what it set out to do.

The reader is placed in the shoes of famed Jedi hero Luke Skywalker, is taken through a crash course of The Empire Strikes Back, and learns a little bit about becoming a Jedi in the process.  I applaud Gidwitz for his intent and his effort, and I respect what he was trying to do with this book.  That being said – lets get on to the gripes… 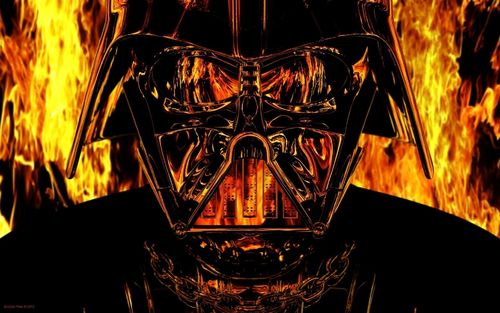 If you had watched the film and someone else read this book, and both of you were asked to write a summary – it is likely that they would turn out very much the same as the book and the source material follow the same general outline.  However, when you get into the details, this one falls apart.

As a young reader who may not be familiar with Star Wars, this book may have been a true joy to read.  For me, a lifelong fan of the films, I found this adaptation to be ultimately distracting with its errors and inconsistencies with the film and other media.

I understand that this is a retelling and that any time anything is retold, there will be differences from the original.  However, I also hold to the saying, “If it’s not broke, don’t fix it!”  There were numerous times in this book where the film dialogue was altered so drastically, that it robbed the lines of the power they had in the film, sometimes even altering the meaning altogether.  Take this line of Han’s for example:

There isn’t enough life on this ice cube to fill a space cruiser.

The same line from the book:

There isn’t enough life on this ice cube to fill a refrigerator. 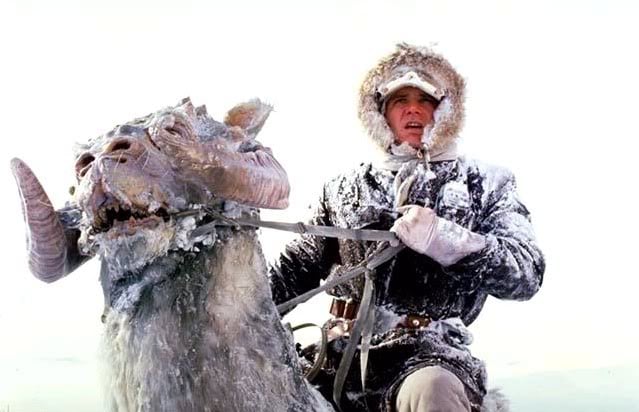 As I read through this book, I constantly found myself asking, “Why?”  It’s almost as if most of these changes were made just because the author wanted to make it seem fresh and relatable to us “earthlings”.  He was constantly altering sigificant lines from the film, adding dialogue (and sometimes an entire scene) where it doesn’t belong, while dropping other important and notable lines along the way.

Some scenes in the book, like the introduction of Yoda are almost completely different from the film.  The Yoda scenes were what I was looking forward to the most with this book, and sadly the scenes on Dagobah represented some of the most disappointing of the bunch.

Yoda resorts to teaching Luke about the Force in parables that seem to fit more in our world than in the galaxy far far away.  These stories include a plethora of earth references such as a rooster and a cat, and one even tells about a Jedi named K’ungfu (no, I’m not joking).

The earth references abound in this book, and some of the most comical instances are when Gidwitz tries to create a Star Wars-y sounding animal species by blending two earth species together.  Take for example the sharwhales of Uthura and the wolf cats of Alderaan (technically wolf cats first appeared in the Shadows of the Empire Novel – but c’mon – there are so many other species out there to choose from).

In one scene, Luke even encounters a creature on Dagobah called an elephoth (guess what earth creature this one resembles).  Imagine a green elephant with two trunks barreling after Luke through the trees on Dagobah.

I know what you’re thinking.  I want you to know that I completely understand what you’re going through right at this moment. But trust me, everything will be okay.  It’s just a kid’s book after all.  It’s not like it could forever taint their perception of the film or anything.  Oh no…what have you done to our children, Adam Gidwitz?  What have you done?

There are many more earth references throughout, like pinball machines on Melchior 5 and the atmosphere of Bespin smelling like syrupy pancakes, most of which make Timothy Zahn’s hot chocolate reference in Heir to the Empire a forgivable offense.  I usually don’t mind this sort of thing to a point, but it became more and more distracting the further I went in the book. 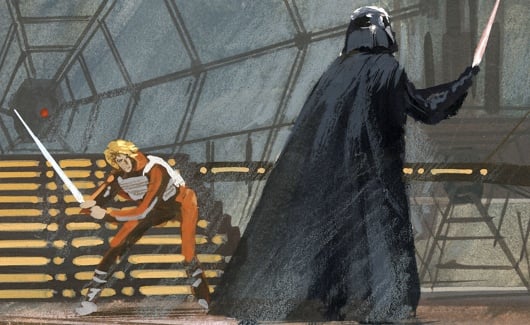 Another instance in the book even resulted in a continuity issue with the Star Wars comic book.  In issue 2 of the comic (set in between ANH & ESB), Vader encounters Luke and recognizes his lightsaber.  The scene where Luke encounters Vader in the carbon freezing chamber on Bespin in this book has a similar exchange, where Vader claims to not have seen the weapon for a long time.  It is written as if the scene from the comic never happened.  While some may actually prefer this scenario, the fact is that the new comics are canon, so this is definitely an inconsistency within the canon continuity.

Aside from some hilarious moments concerning the droids, like Artoo constantly running his potty-mouth and C-3PO chiding him for interfacing with the Cloud City computer, telling him he should wear gloves when touching him because of the sort of diseases that he may have contracted from the strange computer – there is not much to offer for classic fans of the franchise.

Young readers new to the story may enjoy it as it is a fun read so long as it is self-contained, but I think most fans hoping for more insight to the beloved story will want to pass on this one, given that it is one inconsistent continuity mess that can only be canon as far as it aligns with the film itself.