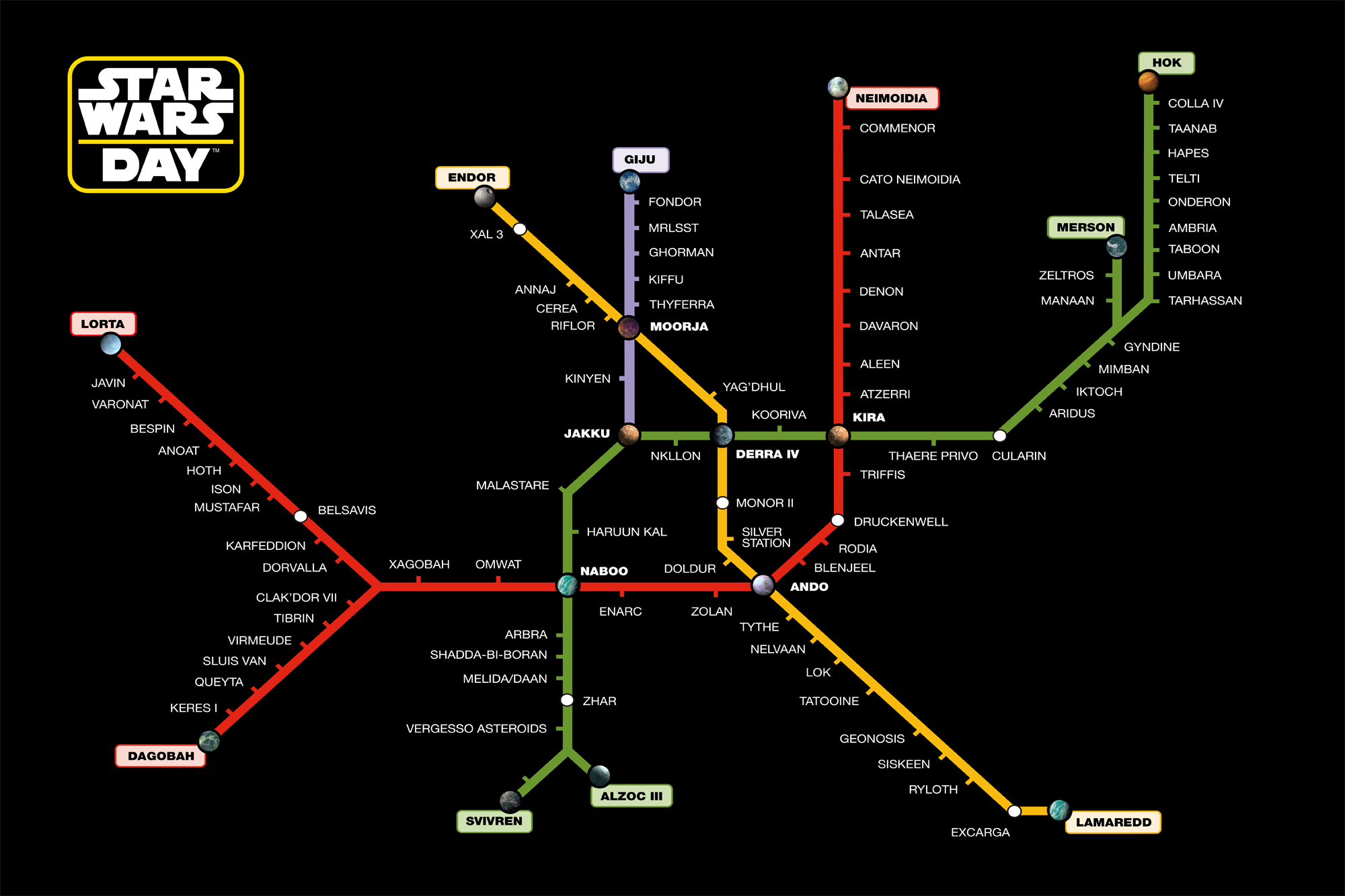 May The Fourth is a special date in the hearts and minds of the geekiest of Star Wars fans, but it looks like part of it might be coming a little early this year – at least in Italy, where the date is reserved for May Third. An image posted on an official Italian Star Wars Facebook page (brought to my attention by Redditor Sempere, along with The Cantina poster tyke) portrays a partial map of the Star Wars Galaxy (shown above), featuring over 90 planets and other celestial objects! This might be indicative of what planets we could see in the Sequel Trilogy and other future installments to the Star Wars Canon, so make the jump to see my analysis on the picture!

First of all, you’re probably going to want to open up that image up top in a separate browsing tab – you’ll probably want to look back and forth between the image and this article as you read it. Have you done that? Good!

It should be noted that, while the image itself is drawn like Milan’s Metro map, there is some evidence that this could be a sign of things to come. Here’s a list of all of the planets/celestial objects in question. Depending on how you count them, there are either 95 or 96 in total. They are, as follows:

A pretty comprehensive map, you might say – but only to a certain point. One thing you might have noticed about this image was that three planets that appear in the movies – Kamino, Coruscant, and Alderaan – are completely absent, along with several planets from The Clone Wars and Rebels and some planets that have been mentioned casually in dialogue. An easy explanation for this is that this image focuses only on the Outer-Rim and Mid-Rim planets – Kamino is a part of the Rishi Maze Galaxy, and Coruscant and Alderaan are Core Worlds. (In any case, Alderaan’s absence can also be chalked up to the planet being blown to smithereens.)

The map also divulges into interesting information, such as a complete and direct confirmation that Jakku and Tatooine are separate planets (as, perhaps unsurprisingly, there were and still are Mystery Box conspiracy theorists that believe that J. J. Abrams is trying to pull another Star Trek Into Darkness-esque twist on the audience, albeit a much more insipid one) and that there’s a planet named Kira – which, as many of you are familiar with, is Rey’s codename for the film. But the most telling bit of information is yet to come. An image (shown below) used to promote the Legends game Star Wars Galaxies adds more to the intrigue (you might want to open that image in another tab as well). 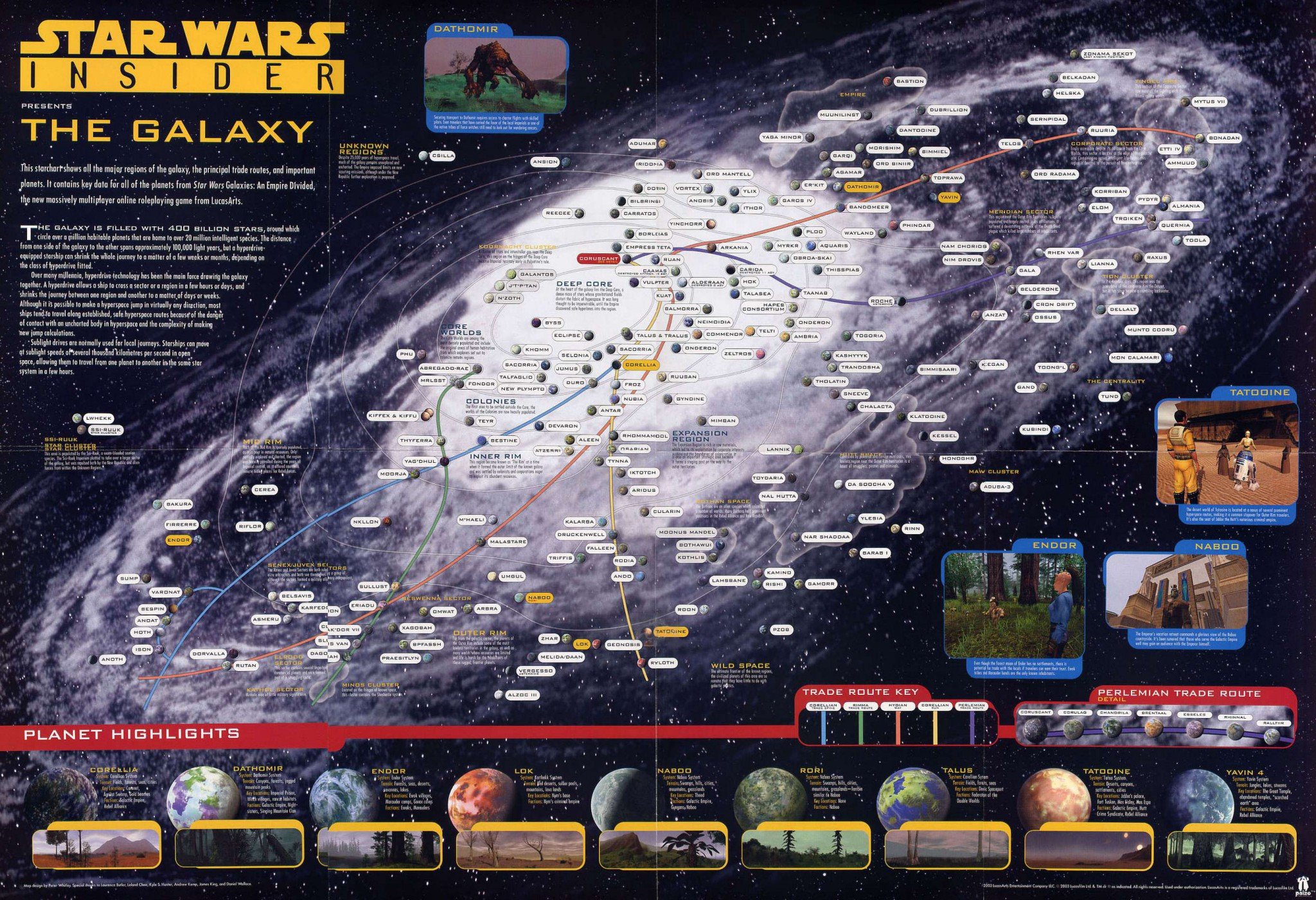 Many planets featured on the non-canonical map appear on the canonical one, and in similar locations and hyperspace lanes to boot. While some planets might not be in the same geographical location, the “Canon” planets are in the same proximities as the Legends planets. And, if you were to look closely at that image (or perhaps Wookieepedia), you would find that several planets on the Legends map also appear on the Canon map. This certainly has fascinating implications for the Canon Expanded Universe in relations to the Legends Expanded Universe. It certainly confirms that Lucasfilm wasn’t going to liquidate a number of planets that were already made for them in works that they licensed out.

With that in mind, might certain other characters be met with the same fate of re-canonization? That’s less likely, but the possibility still exists. Reintroducing individual species – and introducing new characters for said species – would almost certainly be an easier endeavor for the company, though. For more updates on the latest updates on things in the Star Wars continuity – including the movies, television shows, video games, comics, books, and more – be sure to stay on target at Star Wars 7 News.

Matt Martin from LFL and LFL contributor Tim Veekhoved shared on Twitter that this is just a parody of the Italian transit map and we shouldn’t read too much into it. 🙂

@MakingStarWars @ballsinplay It’s not a planetary map, it’s a parody of the Italian public transit map… so don’t read too much into it.

@starwars7news Map just looks confusing :p And I don’t believe it contains any new planet (except for Jakku)