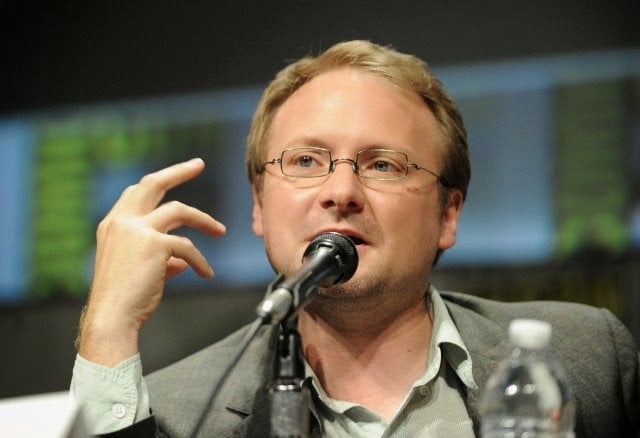 The writer/director of the upcoming Star Wars: Episode VIII revealed few details about his upcoming project during the film podcast Filmspotting at the Music Box Theatre…

“I’m really excited about all the things I can’t tell you,” Rian Johnson, said last night.
Johnson Skyped into the Filmspotting taping from San Fransisco, where he is already working on “Episode VIII.” The director of indie faves such as “Looper” says he took the job because “The thought of it made me so completely joyfully happy.
“I wanted to to play in this world, of literally the first movie my dad put me in the car to see,” he said.

As for how he scored the gig, Johnson laughed, “I can only assume it was a clerical error, like in the movie ‘Brazil.’ There’s a Brian Johnson out there who is really mad.”
Further making the prospect of working at Lucasfilm seem like a dream job to every “Star Wars” fan, Johnson described it as “kind of like summer camp.” He said he and his crew are preparing by watching movies nightly; the last two they watched were “Twelve O’Clock High” and the Russian film “Letter Never Sent.” (Update those Netflix queues now for clues!)

As if he hadn’t won over the fans enough by that point he continued by making a diplomatic statement about the prequels. “There was something really beautiful about the prequels,” he said, as film snob crowd was momentarily stunned, having just booed at the mention of the “Star Wars” prequels.

“With these films, I am trying to harken back to the original ‘Star Wars’ …. Christmas special. We do have Jefferson Starship.”

Finally, Filmspotting cohost Josh Larsen asked an important question. What order does Johnson recommend watching the existing filmography in? “I would do (Episodes) 4-6 then 1-3,” he said, winning the eternal love of the majority of “Star Wars” fans right there. “Storytelling-wise, 4-6 were constructed without the knowledge of the past.”