Obi Wants To Know Me Again! 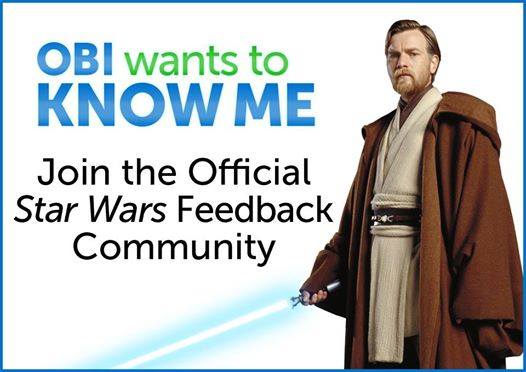 Last year a mysterious website named “Obi Wants To Know Me” appeared out of nowhere seeking fans’ feedback on various topics. Now it’s back! Learn how you can join after the break.

Loyal readers will no doubt recall that Viral Hide reported last September about the appearance of the mysterious website Obi Wants To Know Me in the wake of the Rachel Hurd-Wood/Alex Pettyfer rumors:

Obi Wants To Know Me is founded by Lucasfilm, and it’s main purpose is of getting feedback from Star Wars fans. This current message on the site was written by Spencer Beidelman, Director of Consumer Insights at Lucasfilm. This really gives some credibility to this rumor.

Are you a Star Wars fan who would like to help shape the inner workings at Lucasfilm? You’ll be interested to know that several spots in our small, exclusive fan-based community of advisors has just been opened up for grabs! We are looking to recruit a broad range of fans to help give us direction in all things Star Wars. Click the following link to begin:

The site, an Official subsidiary, is looking for a few good men and women to join their exclusive community. Who knows what untold information you will be privy to, but, if last year’s cycle is any indication, you will most likely be restricted to a very strict Non-Disclosure Agreement.

In the interest of full disclosure I went through the questioning process which takes no more than 3 or 4 minutes to complete. Some of the questions included rating how much you love Star Wars on a scale of 1 to 10 and naming the number of times you’ve seen each of the six movies. Finally, the last message says that you can expect to receive your invitation to join within the next 3 to 4 weeks if you’re selected.

Good luck! And keep us posted on how it goes for you IF it doesn’t violate the NDA of course.