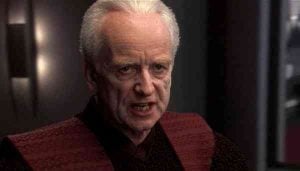 We didn’t have any Star Wars: Episode 7 related news at Disney’s D23 Expo so here’s something to bring you back on track – the latest Episode 7 cast rumor…

According to the site Jedi News:

“An unnamed source has informed us that Ian McDiarmid is set to return to the galaxy far, far away for a part in Episode VII.
The specifics of the role are unclear, but it seems likely that McDiarmid will be returning to his signature role of Palpatine. Whether as the original or a clone of, we are yet to discern.”

The way the info is written first suggests that McDiarmid will have a different role in the new trilogy. I highly doubt that.
More likely he may be featured in a flashback scene or as the ghost of Emperor Palpatine. Also in some SW novels there is indeed a clone of the emperor so there are plenty of possibilities.
We just have to wait for Lucasfilm’s official word about the so called “returning cast”. Until then everything is just a wild speculation.

Speaking about Jedi News, a few days ago they also published this:

“A huge story has hit our desks here at Jedi News. We are working hard to confirm the details but we understand that Lucasfilm are gearing up for a major Episode VII announcement which may go a long way towards satisfying those disappointed by the lack of reveals at San Diego Comic Con, Celebration Europe and the D23 Expo.”

So let’s wait and see.

Now according to Latino Review:

Palpatine comes back as a Force Ghost..like Obi Wan. (Sith Lords learned similar techniques, which in some cases allowed them to physically interact with their environment.)Palpatine will not be a clone, not in human form.Palpatine had a new apprentice before he got killed.

I personally doubt that anyone else beside J.J. Abrams, Kathleen Kennedy and Michael Arndt knows anything about Episode 7’s story. Still this sounds interesting. Especially the part with the new apprentice.