Few months ago Harrison Ford was on the Jimmy Kimmel show and put up quite a performance when asked about the upcoming Star Wars movie. This time Conan O’Brien interviewed Harrison Ford for his upcoming movie ‘Paranoia,’ and offered him a thousand dollars to tell him spoilers from ‘Episode 7…’

Also here’s another great interview with Carrie Fisher, this time for cbc.ca:

It’s been 36 years since Star Wars came out, introducing the world to the iconic double-bun hairstyle of Princess Leia – but for Carrie Fisher, now 56, it’s clear that the ardor hasn’t faded. And it’s on full display at fan conventions – like Toronto’s Fan Expo Canada, which runs from Aug. 22 to 25 – where she’ll occasionally receive the oddest of requests.

“Generally, it’s people having me sign their bodies so that they can have it tattooed,” she marvelled from her home in Los Angeles. “That’s happened a few times now… It wasn’t in weird spots, it was just really going to hurt, like on the palm of their hand, or the crook of their arm.”

But while some film icons might project preciousness or archness about being associated with such an important character, Fisher has rather gracefully pursued her own passion projects. She has settled into a life of scriptwriting, authoring memoirs and the occasional one-woman show; she also speaks out about mental health awareness, a cause close to her heart since she was diagnosed as bipolar when she was 28. Still, she maintains and enjoys her ties to the Star Wars world.

“I don’t take any of this very seriously,” she says. “It was a really fun movie to make – not all the time, but it was fun to make, being a girl in an all-boy fantasy… People just love it. It’s like a fairy tale, it’s part of their youth, so there’s something really innocent. It’s the best part of people that like it.” 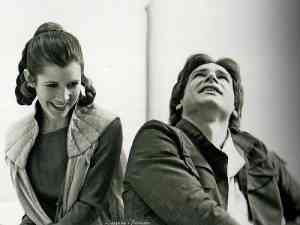 “It wasn’t like I wanted to be in show business, I always was,” says Fisher, the daughter of actress Debbie Reynolds and pop singer Eddie Fisher. “I didn’t have any ambition to be in it, so I didn’t have any ambition to be famous; I’d been around it all my life and it was not an exotic thing, and I knew the downsides of it. I wanted to be a writer.”

Recently, Star Wars fans have been clamouring for information in the wake of J.J. Abrams’s agreement to direct a proposed Episode VII, but they are being rebuffed at every turn. Fisher was tight-lipped, even when pressed for any detail.

“It’s not for me to talk about. I’m someone with a big mouth, and I get in trouble every time I talk about something, so anything to do with this (‘Star Wars’) is not my … thing to discuss,” she says. She even played it coy as to whether there would be a movie at all. “If they are doing a new movie, they have a director who’s a terrific director. I think anything that he does should be greatly anticipated, because he’s really creative.”

Fisher will appear for the last three days of Fan Expo Canada and next month at the Montreal ComicCon, which runs from Sept. 13-15.