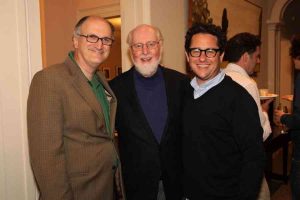 2 of the most important people for Star Wars: Episode 7 have finally met…

Director J.J. Abrams, attended Tanglewood on Parade this week as a guest of composer John Williams, who was recently confirmed to score the new “Star Wars” movie.

Williams, 81, led the Pops in “The Cowboys Overture,” which he composed for the classic 1972 John Wayne western “The Cowboys,” and the BSO and the Tanglewood Music Center Orchestra in the traditional finale, Tchaikovsky’s “1812 Overture.” If you guessed that a spectacular fireworks display closed the show, you guessed right.