Rumor: Ford, Fischer And Hamill Will Be Back For Episode 7 But Their Kids Will Be The Main Characters. - Star Wars News Net Go To Top
Skip to content

Rumor: Ford, Fischer And Hamill Will Be Back For Episode 7 But Their Kids Will Be The Main Characters. 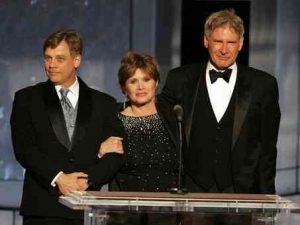 Another day another rumor with nothing concrete. Still it’s worth mentioning…
According to Showbiz 411:

I just got back and saw a story running wild about Harrison Ford playing Han Solo in the new “Star Wars” revival. No one seems sure about it. I was told some time ago that Ford, Carrie Fisher, and Mark Hamill would be reprising their roles in Episode &, Obviously this new movie won’t pick up where “Return of the Jedi” ended. It’s some time in the future. Han, Princess Leia (with a presumably better hairstyle), and Luke Skywalker will be a lot older. Their children will be the new main characters. RsD2 and C-3PO will be unchanged, I would guess. since they are not human. But suffice to say, the three main actors are definitely coming back. The bigger question is, which young actors will play their kids? Luckily Hayden Christensen is long since passed from this scenario. And you know, Carrie Fisher will be the funniest wisecracking princess in the Galaxy– holding a martini glass. Don’t forget, all three of the actors are still profit participants in “Star Wars.”

No sources, no explanations, nothing. Looks like everyone is trying to make the headlines with the new trilogy. 🙂