UPDATE! Knights of the Old Republic Movie Being Developed by Disney? 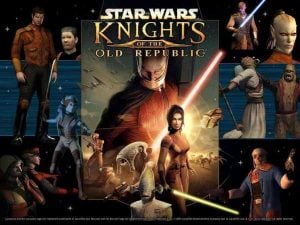 Here’s your next rumor about a possible stand – alone movie based on the Star Wars Universe. Knights of the Old Republic is a video game which story takes place 4000 years before the rise of the Empire…..

This rumor comes again from AICN. They were the first to announced that there’s a Yoda and Jabba movie being considered for a future release.

Here’s their input on the story:

Before I get directly into the rumor, which showed up in a rather elaborate email today, let me talk a bit about what is going on at LUCASFILM right now.  When AICN ran this rumor by some trusted sources, the only thing we got was a statement that there is literally a ton of activity going on regarding a whole bunch of ideas for Lucasfilm.   Essentially, we are living in a time – where there are multiple generations of filmmakers, screenwriters and artists at all levels of film and media production – that have a very real opportunity to try out their ideas.  So yes, there’s all manners of fantasy dream projects regarding a long time ago in a galaxy far far away.   But the only project that has hardcore active development is EPISODE VII – it is the only STAR WARS project that is beyond the treatment stage.   SO – even if this is true, there is zero guarantee that any of the projects that we’re hearing about outside of EPISODE VII will actually come into being.   That said – this is one of those dreams that seem to be being pursued, but isn’t confirmed yet.

Now for the rumor.   Drew Karpyshyn – the man that created the scenario and much of the dialogue in the STAR WARS: KNIGHTS OF THE OLD REPUBLIC.  He also worked on JADE EMPIRE and STAR WARS: THE OLD REPUBLIC.   Along with writing MASS EFFECT and MASS EFFECT 2.   Well he left BIOWARE back in February of last year to work on “screenwriting” and it seems that BIOWARE is a hot bed of rumor regarding the notion that Drew Karpyshyn is working up a screenplay for a film version of KNIGHTS OF THE OLD REPUBLIC.  Is this true?  Or just the idle gossip of hard working game designers at BIOWARE?  I’ve reached out to Drew Karpyshyn and as of this posting I’ve yet to hear back.   On his personal website he states that he has not yet produced or sold any screenplays and that he’s nearly completed his first script and will be looking for an agent to sell it shortly.   With his rather all-star status in games, I’m sure whatever Drew is working on currently is likely to be something worth looking at.

The idea is really good and the possibilities are endless. Here’s the trailer of the video game from almost 10 years ago:

Well so much for this rumor. 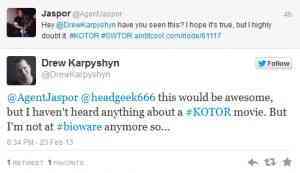