Ewan McGregor Is Up For Obi-Wan Spin-Off Movie. 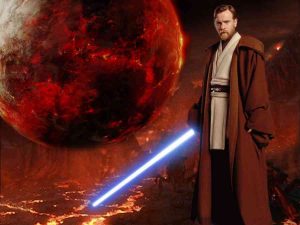 MTV sat down with McGregor during a press event for his new film Jack the Giant Slayer and asked him about his thoughts on a possible Obi Wan spin-off movie. Read what he had to say after the break.

“I think it’s a good idea,” McGregor said of getting his own film. “The only bit that I could get away with doing is after the last one I made, ‘Episode III,’ before Alec Guinness, there’s that period where he’s in the desert.”

McGregor is, of course, speaking of the period of time between the two trilogies, after Anakin Skywalker’s transformation into Darth Vader and before Luke Skywalker meets Old Ben Kenobi. The Jedi was supposedly watching over Luke while he grew up with his aunt and uncle on Tatooine, but what he did to keep himself busy is a mystery. “That might be my window, there, to tell that story,” McGregor said. “I don’t know what he did in the desert. We could make up some stuff.”
Whatever the story might be, McGregor definitely seemed up to the task. “I’d be up for it,” he said.
“Could be quite exciting. I’d be up for it, for sure, of course.”

From all the possible spin-off movies, a movie about Obi Wan makes most sense mainly because Ewan is the only actor that could reprise his role. All other possibilities are either alien creatures or the actors are too old now. So watch out for this one.